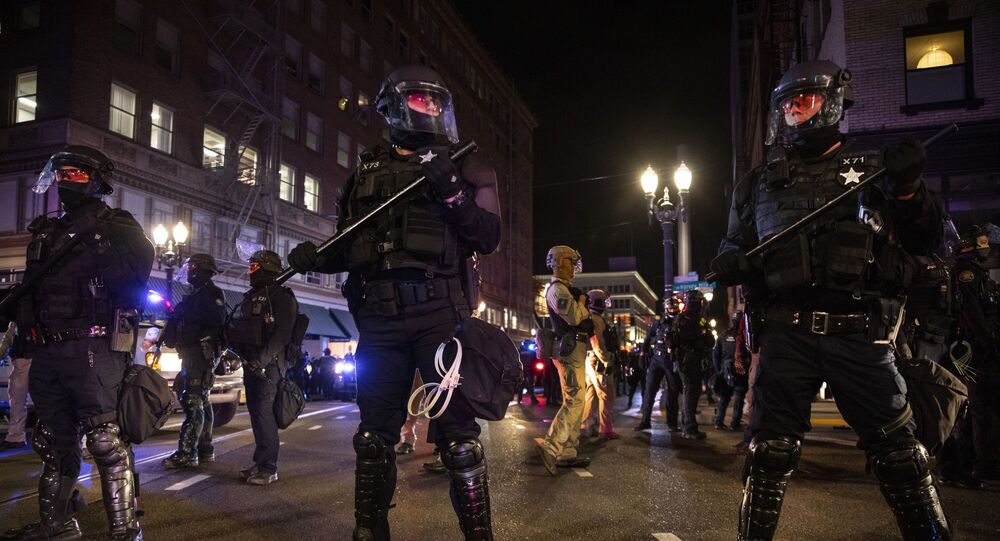 The City of Portland was rocked by protests throughout much of last year amid the Black Lives Matter movement and election uncertainty; 2021 did not start much differently.

A riot was declared in Portland, Oregon just an hour before the clock struck 12:00 on New Year's Eve.

Police announced on Twitter that demonstrators “have thrown multiple firebombs at officers” and even “launched commercial grade fireworks at the Federal Courthouse and Justice Center”, prompting the authorities to respond.

“The violence from the crowd has prompted a declaration of a riot. All persons in the area of Southwest 3rd Avenue around Southwest Main Street are ordered to leave to the south and west immediately,” Portland Police announced on Twitter late on Thursday night.

“If you do not leave you are subject to arrest, citation, and/or the use of force, including but not limited to impact weapons and tear gas,” they warned.

Much of the crowd has broken up into smaller groups and spread out downtown. A large amount of burned debris will continue to block Southwest Main Street between 2nd and 3rd Avenues.

The protest began with demonstrators gathering in downtown Portland at around 9 pm, local station KOIN reported. The activists reportedly assembled not far from the police headquarters and proceeded to march through the city, smashing windows and setting fires along the way, footage circulating in the media revealed.

Portland is ringing in the New Year. pic.twitter.com/DhHHFn13TP

Some videos shared by The Post Millennial editor Andy Ngo showed broken glass from smashed showcases of Starbucks and other local businesses; he claimed that the destruction had been carried out by Antifa protesters.

Antifa smashed their way into small businesses in their New Years riot in downtown Portland. pic.twitter.com/tYSAM7m6tF

Antifa destroyed another Starbucks & other downtown businesses in their Portland riot. pic.twitter.com/w1aAvOVZ4Z

Antifa smashed up a Chase bank and numerous other businesses in downtown Portland after starting fires outside the Justice Center. #PortlandRiots pic.twitter.com/5hKptLjcol

Antifa rioted in downtown Portland for New Years in a planned & pre-announced night of violence. They smashed up small businesses, started fires & even pushed outnumbered law enforcement back. #PortlandRiots pic.twitter.com/MlBoJJSOU9

It’s not clear what the main message behind the gathering was, but a flyer shared by the Pacific Northwest Youth Liberation Front prior to the night of violence advertised a “No Streamers No Megaphones No Masters” event “in solidarity with BLM.”

It called upon activists to gather at Portland’s Chapman Square at 9pm and “be water” - which usually relates to protests organized “autonomously”.

KION says that the investigation on the issue is still ongoing and no arrests have been made so far.

A riot was declared in Portland back in November as a lot of demonstrators took to street to protest against legal challenges Donald Trump campaign brought up to stop vote counting in a number of key states, just shortly after the Election Day. ​Democratic Governor of Oregon Kate Brown has activated the state National Guard back then to help authorities curb violence.