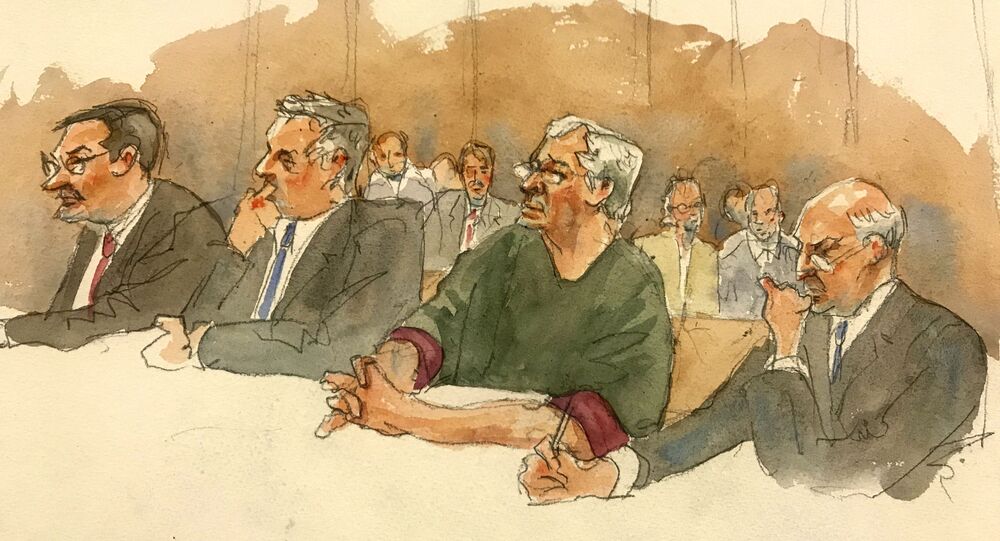 Disgraced financier and convicted sex offender Jeffrey Epstein died in his prison cell in August 2019. His death was ruled a suicide but conspiracy theories on the subject still keep spurring online amid his association to a powerful circle of people who could have been implicated in connection to his sex trafficking activities.

L. Lin Wood, an American attorney who propagated a number of lawsuits claiming that President Donald Trump won the re-election bid in November, has posted a bizarre conspiracy tweet on Thursday, alleging that deceased financier Jeffrey Epstein was actually alive.

Epstein’s name resurfaced as Wood was discussing the death of Justice Antonin Scalia, a former member of the US Supreme Court who passed away in 2016. It is believed that the conservative justice had died from the natural causes at his friend’s ranch, although an autopsy was not carried out at that time. Wood claimed on Wednesday that Chief Justice John Roberts was aware of the man’s upcoming passing as he was apparently “discussing Justice Scalia’s successor before the date of his sudden death”.

He also cited a “reliable source” to suggest that “Roberts arranged an illegal adoption of two young children from Wales through Jeffrey Epstein.”

“I think we can all agree that Epstein knows paedophilia,” Wood pondered on Twitter. “If only Jeffrey Epstein was still alive . . . Wouldn’t that be something?”

My information from a reliable source is that Roberts arranged an illegal adoption of two young children from Wales through Jeffrey Epstein.

I think we can all agree that Epstein knows pedophilia.

If only Jeffrey Epstein was still alive . . .

Wouldn’t that be something? https://t.co/DwhgKO3gMp

Apparently responding to a wave of comments his tweets had caused, he then went on to claim that the late businessman was actually not dead:

"I am fully aware of the onslaught of attacks being made against me based on my revelations about Chief Justice John Roberts,” he tweeted on Thursday. “Before attacking me, maybe fair-minded people would first ask Roberts to tell the truth.”

“Or ask Jeffrey Epstein. He is alive."

Prior to that he had also questioned whether Chief Justice Roberts was “a member of any club or cabal requiring minor children as initiation fee.”

Ok now you really just have to come forth with proof. This is getting crazier by the minute. It’s all completely believable. But it sounds pretty unhinged to everyone without some shred of evidence.

I’ve never thought he was dead in the first place. I think he’s been singing his heart out all this time in protective custody.

Roberts did not publicly respond to the posts, although Wood also questioned whether the chief justice was going to sue him for defamation if his  claims are baseless.

I have publicly accused him & Justice Breyer of being profane anti-Trumpers.

I have linked Roberts to illegal adoption, Jeffrey Epstein, pedophilia & prior knowledge of Scalia’s death.

Did Roberts skip class on defamation?

Jeffrey Epstein was an American financier with a close circle of powerful friends and associates including British royal Prince Andrew,  Harvard Law School professor Alan Dershowitz, the Clinton family and the Trumps. He was convicted of sex offences back in 2008 but was landed with a “sweet” plea deal to serve only 13 months in custody while being able to go to work from time to time.

Several years later, he was accused of widespread sex trafficking activities in relation to minors but died in a prison cell in August 2019, while awaiting trial. His death was ruled a suicide by hanging but many questioned the conclusion back then, citing controversial autopsy results and a breach procedures from guards who should have been timely overseeing his cell. It was claimed that Epstein’s injuries were strongly consistent with those of homicide victims, but two cameras in front of his prison cell were not functioning at the night of his death to say anything with certainty. However, the fact of his passing was rarely questioned before, until brought up by Wood, a well-known propagator of controversial theories about US presidential election, COVID-19 pandemic and the role of Chinese government in functioning of American politics.