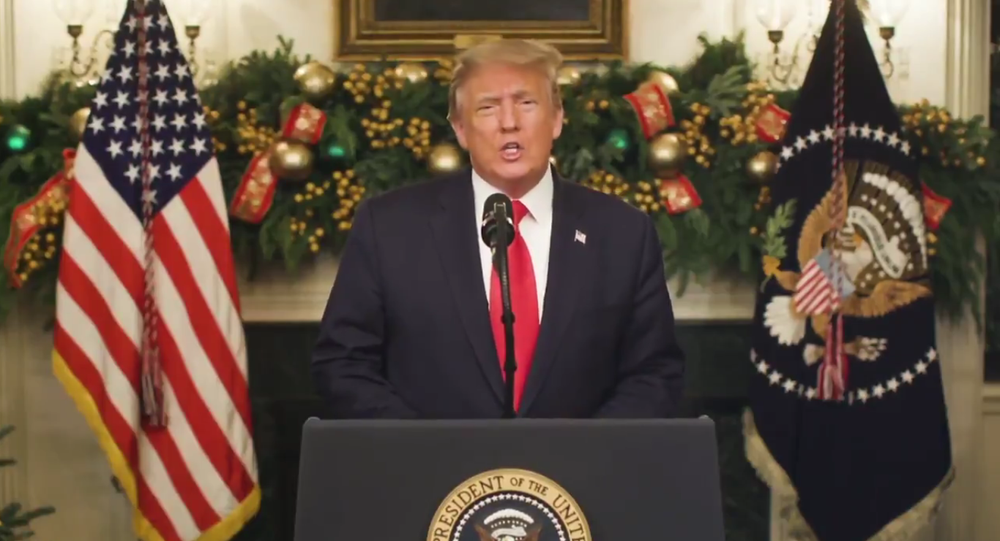 US President Donald Trump recently outflanked Democrats by demanding higher direct payments for families than months of compromise on a recent COVID-19 relief bill had yielded. However, the bill has now stalled in the Senate as his own Republican Party leadership has blocked a vote on the proposal.

As 2020 draws to a close,Trump heaped praise upon his administration’s push to develop a COVID-19 vaccine and on the state of the US economy less than a month before he is due to leave office.

Trump returned to Washington, DC, on Thursday amid a political showdown with Congress over the provisions of the Pentagon’s annual funding bill and a new COVID-19 relief bill, Reuters reported. Accordingly, he delivered his final national address of the year from the White House, in which he attacked critics of his administration’s handling of the COVID-19 pandemic.

“In the face of great challenges this year, Americans showed incredible grit, strength, tenacity and resolve, and together we achieved truly historic victories like nobody ever thought possible,” Trump said  in a video posted to the White House Twitter account.

He noted the onset of the pandemic in March led to the largest mobilization since World War II as factories were repurposed to build medical equipment, including ventilators and face masks, and therapies and treatments to ease the symptoms of the potentially deadly respiratory illness were rapidly developed. This, he said, “saved millions of American lives.”

“Over and over again we were told it would be impossible to deliver a vaccine by the end of the year,” Trump said. “All of the experts said ‘absolutely unthinkable, Trump is exaggerating, it can’t happen.’ And we did it, long before the end of the year. They said it would take a medical miracle, and that’s exactly what it is. Years from now they’ll be talking about it; they’ll be talking about this great, great thing that we did with the vaccines.”

He promised that by early 2021, every American will have access to a vaccine, after which the US will ship vaccines to other countries to “end the pandemic once and for all.”

The president’s attention then shifted to the economy, which has remained a cornerstone of his claims of success throughout his four-year administration.

“Before the pandemic, we built the greatest economy in the history of the world; now we are doing it again. We’ve actually built, if you think about it, two great economies: before and after,” Trump said.

He noted the government passed $3 trillion in economic relief after the pandemic began, including aid to families, businesses and Wall Street, and said the Paycheck Protection Program alone had “saved or supported more than 51 million American jobs.”

“We’re doing numbers now like nobody’s ever seen before, including having the highest stock market in the history of the world. I froze student loan payments, stopped evictions, suspended payroll taxes; we have slashed the unemployment rate from 14.7% all the way down to 6.7%, and a lot of people thought that the 14.7% could be 32% or 40% or 45%, and now we’re down to 6.7% and heading a lot lower,” Trump said.

He also noted the country saw a 33.4% increase in gross domestic product in the third quarter of 2020, claiming it had recovered much faster than European nations from the near-total shutdowns of early 2020 and that “nobody can compete with us in terms of going down less and going up by far the fastest and the best.”

Trump also briefly mentioned meeting some other goals of his administration, including the return of manufacturing jobs to the US; major controls placed on immigration to the US, including beginning construction of a wall along the US-Mexico border; lowering drug prices; and “signing historic peace deals in the Middle East.”

“It’s all ending in the Middle East,” Trump said. “We have to hope it keeps going. It’s so easy, if you know what you’re doing.”

“In this season of joy, Americans have so much to be grateful for. We’re all blessed to live in the greatest country ever to exist on the face of the Earth, and we have made it greater than ever before. As long as we remain loyal to our nation, devoted to our citizens and faithful to Almighty God, we know that the best is yet to come. God bless you, and God bless America,” he said.

State of the Nation

Trump’s speech comes as the pandemic enters its worst phase so far in the United States. According to data from the US Centers for Disease Control and Prevention and aggregates collected by the New York Times, at least 344,200 Americans have died of the novel coronavirus, with more than 3,700 dying just on Wednesday - the deadliest day of the pandemic to date. More than 230,000 new cases were recorded in the US on Wednesday, and the seven-day average for daily new cases sits at 180,671 per day - down from the average of 230,000 per day earlier this month.

While US stock indices set records at the end of the year and GDP growth has begun to rise, economic predictions for 2020 as a whole are especially dire. According to the US Department of Commerce, US GDP is expected to contract by 3.5% for all of 2020. The most recent US Department of Labor data, from early December, prior to the onset of many new lockdowns, showed 10.7 million Americans in the labor force were out of work, with another 7.1 million people who are not in the labor force but want a job.