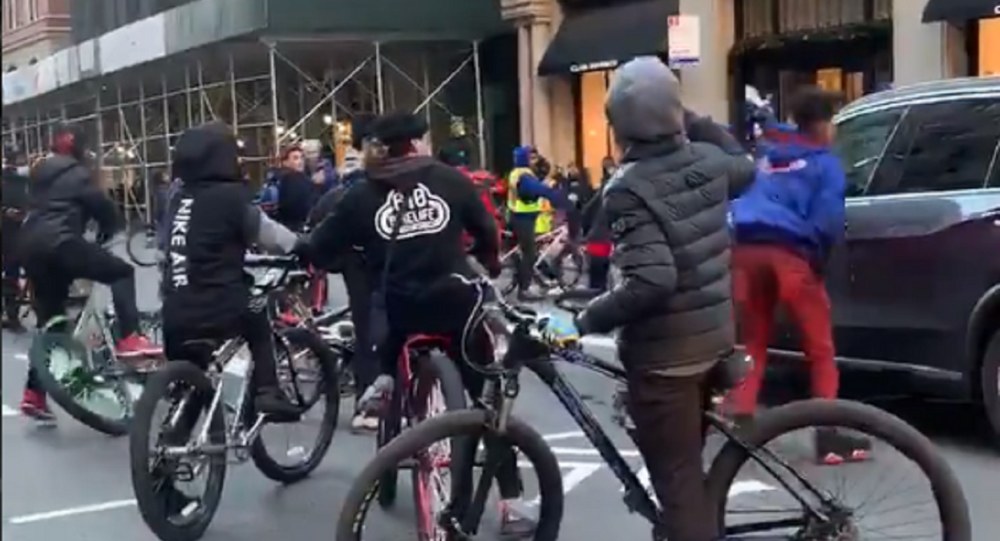 On Tuesday, in broad daylight, a group of at least 50 teenagers on bicycles blocked traffic at the intersection of East 21st Street and Fifth Avenue in the Manhattan borough of New York City. Several videos taken from the scene show the unidentified teens surrounding and smashing at least one SUV, with a driver and his 70-year-old mother inside.

New York City Mayor Bill de Blasio on Thursday condemned an attack on an SUV by a group of teenagers in broad daylight on Tuesday in the NYC borough of Manhattan.

De Blasio slammed the incident as being “absolutely unacceptable”, vowing that the perpetrators of the attack will be held accountable.

“It’s absolutely unacceptable,” de Blasio said. “You have these teenagers doing something that is just wrong, period.”

The mayor pointed out the New York City Police Department (NYPD) arrested at least one of the teenagers involved in the attack on the vehicle, pledging that “the others will be” as well.

“Look, we’ve got to teach our young people better all the time. It’s incumbent upon on all of us. But we also have to have consequences. So there will be consequences in this case,” de Blasio said. “I don’t want to see anything like this happen ever again in New York City.”

On Tuesday, videos emerged online featuring a group of between 25-50 teenagers on bikes attacking, in broad daylight, a luxury BMW at the intersection of East 21st Street and Fifth Avenue in the Manhattan borough of New York City, with the vehicle driver inside.

East 20s, #Manhattan, New York, earlier today. ~25 - 50 mixed-age teenagers on BMX bicycles descend onto the streets. Two grab onto a car driving by to catch a ride. The driver breaks & 1 of the bikers crashes into something, resulting in a bloody lip. Next is below. #FundPolice pic.twitter.com/qXowgJG9S4

The driver of the SUV, Max Torgovnick, 36, told the New York Post on Wednesday that the teens attacked his vehicle while he and his 70-year-old mother were driving to his father’s neurology office after dropping off a donation at a nonprofit organization to help fight homelessness in the city.

“It’s something that I never expected to happen in New York City,” said Torgovnick. “That’s something like you would see on the streets of a war zone. I never thought New York would get this bad.”

Torgovnick told the outlet that he and his mother were afraid that the attackers “were going to break the window, get in the car, reach in, and pull us out”.

“My only thoughts at that moment were self-defense, [that] I wanted to protect my mother and I also didn’t want to hurt anyone,” the driver said. “She was screaming, ‘We’re going to die, they’re going to kill us’.”