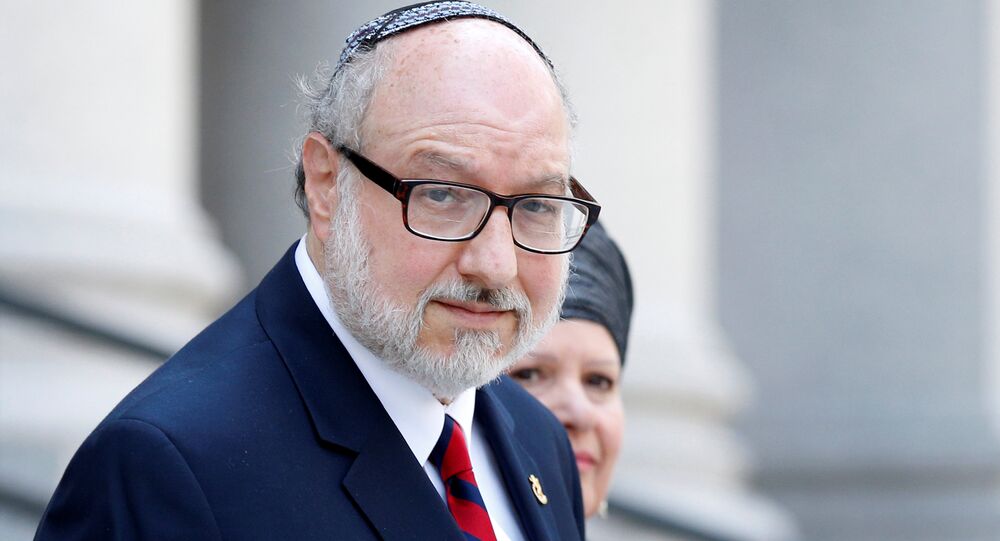 Spying for a Friend: Why Jonathan Pollard Spent 30 Years in US Jail for Selling Secrets to Israel

US citizen Jonathan Pollard, who served 30 years in jail for spying for Israel, has arrived at Ben Gurion airport. He was welcomed by Israeli Prime Minister Benjamin Netanyahu.

A former navy analyst, Jonathan Pollard, has arrived in Israel after emigrating from the United States.

Pollard, a 66-year-old Jewish-American, arrived on Wednesday, 30 December, just before dawn on a private jet owned by billionaire Sheldon Adelson and was whisked away to avoid the glare of publicity.

Israeli spy Jonathan Pollard’s trip from EWR to TLV on a private plane is interesting.

The plane appears to have a Las Vegas Sands livery, the corporation controlled by the GOP’s and Trump’s biggest donor, Sheldon Adelson.

The photos appeared in Israel Hayom, owned by Adelson. pic.twitter.com/XCz7ohGinj

​Mr Netanyahu said a Hebrew prayer of thanksgiving for the liberation of Pollard, who spent 30 years behind bars and another five years on parole.

Pollard, who was born in Texas, worked as a civilian intelligence analyst at the Navy’s Anti-Terrorist Alert Centre in Maryland but began working for Israel in 1984.

He sold sensitive documents to Israel. The exact contents have never been disclosed but on the FBI website it says “the quantity was significant”.

At the time he was assisted by his wife Anne and the couple were arrested on 21 November 1985 outside the Israeli embassy in Washington DC.

Pollard pleaded guilty in 1986 to passing military secrets to Israel and was jailed for life.

© AP Photo / Sebastian Scheiner
An ultra-Orthodox Jewish man walks past a banner depicting U.S. President Barack Obama, and Jonathan Pollard, a Jewish-American who was jailed for life in 1987 on charges of spying on the United States.

Anne was also convicted and spent three years in jail. When she was paroled he divorced her, saying he did not expect her to wait decades for him. She later moved to Israel and he eventually married Esther, who had campaigned for his release.

In November 2015 Anne was interviewed by Israel’s Channel 2 News and claimed they had been sold out by the Israelis.

She said her Mossad handler called her as FBI agents were “tearing the house apart” but he told them to go to the Israeli embassy at 10am the next day.

But when they arrived they were immediately told to leave by armed Israeli guards and the FBI were waiting outside the embassy gates.

“It was obvious they were going to arrest us. I feel like they really stole our lives,” Anne said.

Ronald Reagan was the US President at the time and Yitzhak Shamir, a former Mossad officer, was Israel’s Prime Minister.

Although Israel later apologised for recruiting the Pollards, the case tarnished relations for many years.

Despite the US and Israel being close allies successive presidents refused to show clemency and pardon Pollard because his crime was considered such a serious breach of protocol.

© AP Photo / Oded Balilty
Israeli protesters hold posters demanding the release of Jonathan Pollard, a Jewish American who was jailed for life in 1987 on charges of spying on the United States, as they stand outside the U.S. embassy in Tel Aviv, Israel.

Last month Haaretz newspaper columnist Anshel Pfeffer wrote: “While Israel profusely apologised to the Reagan administration and eventually went to extraordinary lengths to expiate that betrayal, it has never apologised to America’s Jews for putting them, as a collective and as individuals, in the invidious position of having to defend themselves from the suspicion of divided loyalties. That betrayal is ongoing.”

The International Holocaust Remembrance Alliance’s official definition of anti-Semitism includes “accusing Jewish citizens of being more loyal to Israel, or to the alleged priorities of Jews worldwide, than to the interests of their own nations.”

#Breaking: While you were sleeping, paroled spy Jonathan Pollard slipped away from the United States & flew to Israel. Netanyahu greeted him at airport with newly issued Israeli ID card. pic.twitter.com/Jm7HTS1W6i

​Pollard was only freed from prison in 2015, under the Obama administration, and was given a five-year travel ban as part of his parole conditions.

But last month the Trump administration announced it would not renew the travel ban, leaving Pollard and his second wife Esther free to emigrate to Israel.

In a column in the Israel Hayom newspaper - which is owned by Sheldon Adelson - his wife Miriam wrote: "He deserves to live in a country that treats its ally with respect and wisdom."

Pollard was only one of a number of foreign agents who were arrested in 1985, which was dubbed by the FBI “the year of the spy.”

Also arrested that year was John Walker, a US Navy communications specialist, who was jailed for life for spying for the Soviet Union. Walker died in prison in 2014.

"Welcome home Jonathan Pollard. I've been in the profession since 1983, and I think tonight is the most moving of my professional life."

That says it all. https://t.co/pBe9cYNFai

​CIA clerk Sharon Scranage was also convicted of passing on secrets to her boyfriend Michael Soussoudis, a cousin of Ghanaian President Jerry Rawlings.

Scranage was jailed for five years but Soussoudis was sentenced to 20 years, only to be swapped for eight Ghanaians who had spied for the CIA.

Also caught in 1985 were Ronald Pelton, a KGB spy within the National Security Agency, and Larry Wu-tai Chin, who committed suicide while awaiting trial on charges of spying for China.

Pelton was jailed for life and, like Pollard, was released in November 2015.