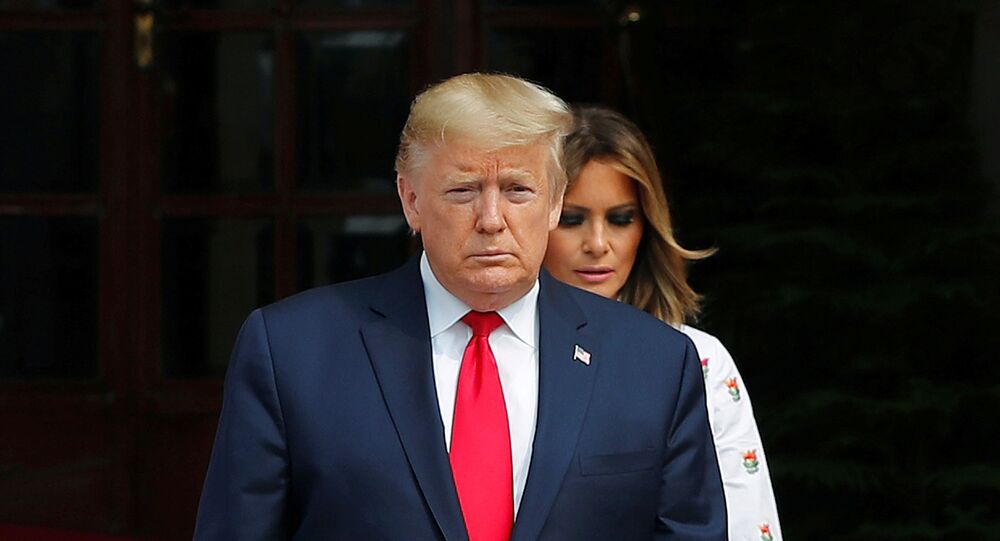 Donald Trump's Mar-a-Lago home in Florida was earlier reported to be under renovation before the sitting president leaves the White House on 20 January as President-elect Joe Biden is sworn into office.

Changes to Donald Trump's private quarters at his Mar-a-Lago estate, many of which were overseen by First Lady Melania Trump, were not to the US president's liking, rendering him "moody", according to multiple sources cited by CNN.

Once Trump entered the members-only club just days before Christmas, insiders claim he was irate at the revamp, which struck a dissonant note with his personal aesthetics, and several "loud, one-sided conversations" with the management followed.

"He was not happy with it", the outlet cited a source as claiming.

Trump was suggested as being so irked by the alterations this week, that he had pieces of the décor, which consisted of white marble and a profusion of dark wood, promptly ditched.

Besides the actual living space, Trump was also annoyed by other renovations on the property, revealed the source. Insiders also reported that the sitting president was spending more time than usual behind closed doors, refraining from his usual mingling and conversing with club members and senior White House staff.

"The vibe is off", said a source at Mar-a-Lago.

Melania Trump, and her interior decorator, Tham Kannalikham, had selected many of the details for the makeover ahead of the upcoming "changing of the guard" at the White House.

As President-elect Joe Biden is set to take the oath of office during the inauguration ceremony on 20 January, renovations were undertaken at Mar-a-Lago to make the approximately 3,000-square-foot space feel larger and more updated.

President Donald Trump’s Schedule for Monday, December 28, 2020:
President Donald Trump and First Lady Melania Trump are spending Christmas with their family at Mar-a-Lago. The president does not have any events on https://t.co/5jbrtcM7Mk #donaldtrump #thepresidentsschedule pic.twitter.com/LJAvlb7PL8

​Earlier in December a source was quoted by People magazine as saying that Donald Trump's Mar-a-Lago residence "will be expanded and spruced up", as First Lady Melania reportedly flew to check on the renovations and "fixes" to the bathrooms, according to CNN.

She was also to monitor updates to the suite where her parents are living and ensure the overall upgrades were in good shape for the post-White House move-in, reported CNN.

There has not been any official comment from the White House.

According to sources, this isn't the first time Donald Trump has taken a dim view of his wife's personal taste in décor.

POTUS was believed to have been far from thrilled over some of the decorative updates to the presidential country retreat Camp David, similarly overseen by Melania Trump, when he saw them during the Thanksgiving holiday, according to sources.

​Responding to the report regarding Ma-a-Lago, netizens were left wondering just what Trump's aesthetics might amount to, exactly.

Not enough gilded, tacky furniture and wall coverings for his lousy taste?

This is his favourite style of decoration: pic.twitter.com/zlA9ma6tZ7

He just figured this out?
Christ on a skateboard, look who she married!

No surprises here. Complaining about renovations is a clear signal that Trump plans on stiffing the contractors. Not adhering to CDC guidelines at the club is par for the course. Pun intended.

​Some were quick to recall other decorating forays by Melania Trump, posting throw-back pics.

We saw how she massacred the Rose Garden.
~it's not like she promised trump one. pic.twitter.com/dPODsd844W

Can't imagine why, she has such an exquisite sense of style ... pic.twitter.com/rY69qoNLxS

America didn't like what she did to the White House and Rose Garden. What makes anybody think she has any taste? I mean, look who she married.

Really don’t care, but @MELANIATRUMP is a great decorator. pic.twitter.com/8OqGO7wJle

​Social media users also pointed out that it was in poor taste for the media to focus on lavish décor at the private estate amid the coronavirus pandemic and the devastating impact it has had on people's lives.

The emperor is unhappy with his new suite? Too bad...maybe he should live like the many Americans facing homelessness thanks to his failed response to covid-19...he might even be one of the lucky ones with a tent 😭

Congratulations @CNN . you are officially at the level of National Enquirer and other similar made up gossip rags. Looking forward to a Loch Ness Monster sighting story in the coming months.