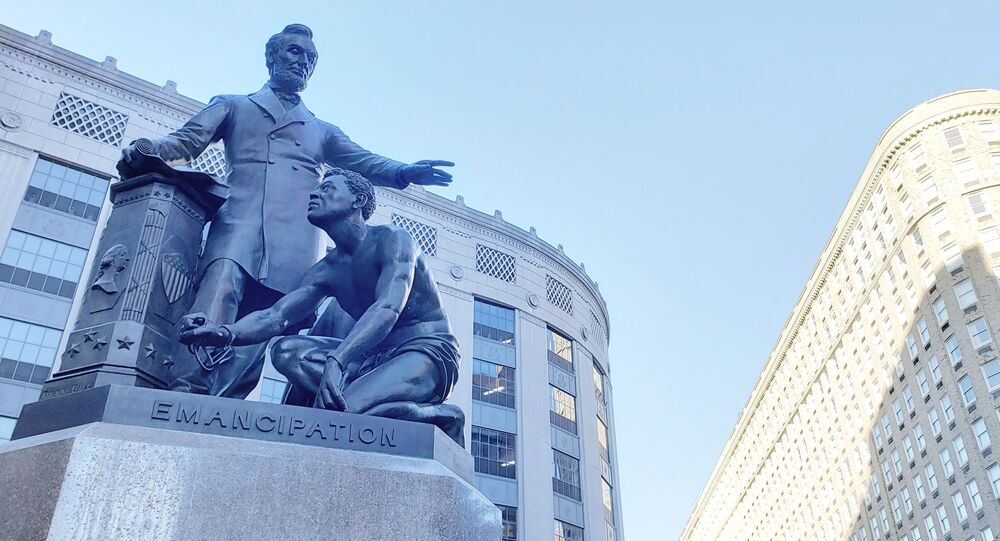 Many monuments and memorials referring to American historical figures have been threatened with demolition as the anti-racist movement associates them with racial injustice. Even Abraham Lincoln, who abolished slavery, seemed to be in danger.

The Emancipation Memorial was dismantled in downtown Boston on Tuesday. The cultural site portrayed a freed slave on one knee next to Abraham Lincoln, who is holding a copy of his Emancipation Proclamation.

The monument, erected in 1879, commemorated the emancipation of slaves in America, depicting Archer Alexander, who escaped slavery, helped the Union Army, and was the last person to be caught under the Fugitive Slave Act.

In June, after heated debate, city officials agreed to demolish the statue, claiming that the sculpture may cause "discomfort" despite the fact that the monument is noted by many to be dedicated to emancipation and was funded by former slaves.

Boston's public arts commission voted for the removal following a petition signed by over 12,000 people. The monument's adversaries reportedly perceived the man, who gets to his feet and frees himself from shackles, as kneeling before Lincoln. According to the commission statement, the statue “perpetuated harmful prejudices and obscured the role of Black Americans in shaping the nation’s freedoms”.

The ‘Emancipation Memorial’ sculpture of a slave crouching at the feet of President Lincoln has been removed from Park Square in #Boston. #WCVB

The sculpture is a miniaturized reproduction of an original monument installed in Washington DC. The latter drew attention last summer, when Black Lives Matter activists and other protesters noted that the Emancipation Memorial inappropriately depicts African Americans, distorting their contribution to liberation from enslavement. Some activists threatened to demolish the sculpture, forcing police to enclose the monument with a fence to prevent vandalism.

The Boston Emancipation Memorial demolition falls in line with a recent trend of so-called 'cancel culture' that has gained momentum amid widespread social unrest erupting shortly after an unarmed African American, George Floyd, was killed by white police officers in May 2020.

Against the backdrop of fighting racial injustice, police brutality and other forms of discrimination, so-called 'justice fighters' and other activists have appeared to some to have become extraordinarily sensitive to alternative points of view regarding art and commemorative public sculpture.

Cancel culture implies that a person, group or concept (names, images, etc.) representing past 'cultural wrongdoing' should be boycotted until the message of "harm" is undone.

Calls for cancellation during the past year have seen a variety of social and cultural phenomena changed, including the names of sport teams, foodstuffs and other goods, leading to criticism by some of movies and TV series, and, at least on one instance, a call for reconsidering superheroes.

Cultural sites dedicated to historic figures have also been targeted by protesters (either statues have been toppled or vandalised "beyond repair") who suggest that former Confederate generals, slave-owning presidents, key historic personas like Christopher Columbus or Frederick Douglass should be cancelled due to values they represent "being wrong".

Some public figures and influencers advocate the preservation of historical heritage, regardless of whether their actions of the past would be unacceptable in the present day. In June, US President Donald Trump signed an executive order to protect the country's commemorative cites from vandalism.

"We will never allow an angry mob to tear down our statues, erase our history, indoctrinate our children or trample on our freedoms", he declared in an address at the White House on 4 July.

In a 4 July speech at Mount Rushmore, POTUS directly blamed George Floyd protesters for waging "a merciless campaign to wipe out our history", "defame our heroes, erase our values, and indoctrinate our children".