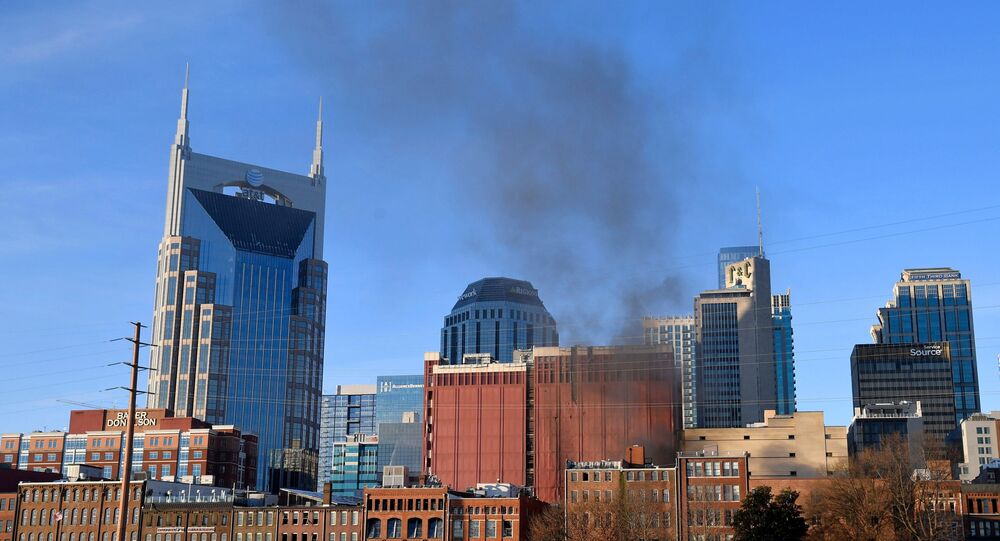 A bomb-laden RV belonging to Nashville resident Anthony Warner, exploded on 25 December in the Tennessee state capital's downtown, wounding four people and damaging nearly 40 nearby buildings, including the AT&T Building; there was an audio broadcast of a warning prior to the attack urging residents to evacuate.

The Christmas Day bombing in Nashville blamed by officials on Anthony Quinn Warner that left three people wounded and damaged 41 buildings should serve as a ‘wake up call’ to the US, believes an ex-counterintelligence official.

Frank Figliuzzi, former assistant director for counterintelligence at the Federal Bureau of Investigation, spoke on CBS’ Face the Nation on Sunday to emphasise that the bombing incident yet again illustrates how easy it can be for a lone perpetrator to trigger such havoc.

BREAKING: Law enforcement is now announcing that Anthony Warner, 63, of Bakertown Rd, is the man believed responsible for Friday's explosion. He perished in the blast. No one else is presently believed to have been involved. Thank you to our federal & state partners. pic.twitter.com/PwMa1MwHvd

“I think this is a wake up call and a warning for all of us about how vulnerable our infrastructure is, how relatively easy it is for a single individual to do this,” said Figliuzzi.

The former senior FBI official warned that the threat of a ‘copycat’ perpetrator was both very real and ‘concerning’.

“Now, we've concentrated, post 9/11 on, on getting our hands around all the chemical companies, mass orders of precursors for known explosives. And look what an individual can do on his or her own when they simply unmask quantities of things that are under the radar screen,” said Frank Figliuzzi.

The former FBI official cited the single deadliest terrorist incident before the 11 September 2001, attacks. As he recalled the 1995 bombing of the Murrah Federal Building in Oklahoma City that killed 168 people, carried out by Timothy McVeigh, he drew comparisons between that case and the Nashville bombing.

The attack in 1995 was carried out by using a truck loaded with a 4,800 pound mixture of ammonium nitrate fertiliser, nitromethane, and diesel fuel.

“You'll remember Timothy McVeigh largely, perhaps with one or two cohorts, did this entirely by himself, getting huge amounts of fertiliser… So the short answer is, yes, it can be done. It's not the last time we'll see this, but we should be thankful that this happened with very few deaths,” said Figliuzzi.

Timothy McVeigh was subsequently sentenced to death and executed by lethal injection in 2001. His co-conspirator, Terry Nichols, was sentenced to life in prison.

Figliuzzi called for heightened vigilance of the public about people around them.

“Shop owners and companies who are seeing smaller orders of precursors, that’s where our vulnerability is,” he added.

When he was asked by the host to comment on reports that Warner was believed to have been influenced by conspiracy theories linked with 5G technology, such as the idea that 5G waves are harmful to one's health, Figliuzzi replied that “there’s tremendous dangerous polarisation and it’s being fuelled by social media conspiracy theorists out there.”

After it had been made public that Anthony Warner was responsible for the blast, reports emerged that he believed in aliens and supported 5G conspiracy theories, reported Newsweek, claiming that federal, state, and local officials were concerned over possible copycat attacks targeting telecoms infrastructure, specifically 5G equipment.

Figliuzzi’s comments come as investigators are still pondering the motive for the bombing masterminded by Anthony Quinn Warner, 63, who is said to have left behind clues indicating he planned the bombing and had intended to kill himself.

According to Tennessee law enforcement officials, Warner, who lived in Nashville's suburbs, rigged his RV with explosives and timed them to ignite at 6:30 am; he parked it in a popular entertainment district in deserted downtown Nashville just before sunrise on Christmas Day.

The blast was accompanied by a recorded announcement warning anyone nearby that a bomb would soon detonate. After that, the audio switched to a recording of Petula Clark’s 1964 hit “Downtown”.

Warner himself died in the blast, which allegedly targeted the AT&T building, while three people sustained injuries. At least 41 other buildings sustained damage due to the explosion, while widespread internet and phone disturbances were reported in the area in the aftermath.

NEW IMAGES: Incredible devastation on Nashville’s 2nd Ave. as a result of the #nashvillebombing pic.twitter.com/vbrSZ3hJUj

​The perpetrator’s neighbour Rick Laude told The Associated Press on Monday he had run into Warner standing at his mailbox less than a week before Christmas. At the time, after inquiring about the well-being of the man’s elderly mother, Laude reportedly wondered if Santa was “going to bring you anything good for Christmas?”
To this, Warner was reported to have answered:

“Oh, yeah, Nashville and the world is never going to forget me.”

Investigators are still hoping to discover the motive for the attack, as they analyse Warner’s belongings, including a computer and a portable storage drive, and continue to interview witnesses, according to a law enforcement official cited by AP.

Warner had recently given away a vehicle to a person, telling them he had cancer, which is yet to be verified, said the source, while also reportedly giving away his home in Antioch, a Nashville suburb, to a Los Angeles woman just a month prior to the bombing, asking nothing in return.

According to a text message cited by AP from real estate agent Steve Fridrich, who employed Warner as a computer consultant for Nashville, Warner had said he was retiring earlier this month.

According to law enforcement officials, Warner had not been on their radar before the events on Christmas, with his one arrest dating to a 1978 marijuana-related charge.

According to law enforcement sources cited by the outlet, forensic analysts were reviewing evidence from the blast to identify the components of the explosives, while investigators were examining Warner’s digital footprint and financial history.

Federal agents were also said to be examining several theories, including the possibility that the AT&T building was targeted.