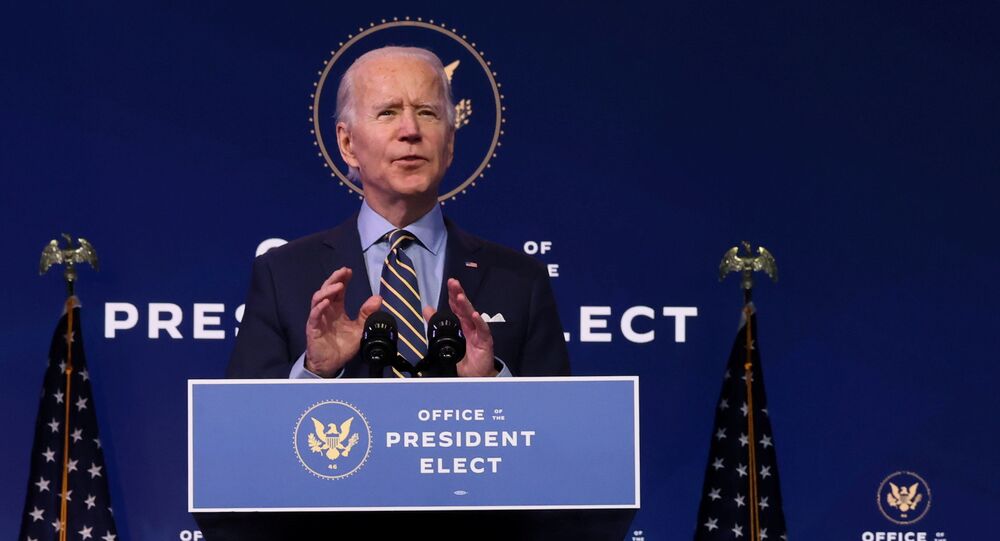 WASHINGTON (Sputnik) - US President-elect Joe Biden earlier said that he would not immediately end the trade war with China and remove trade duties imposed by US President Donald Trump. During a press briefing on Monday, Biden addressed US-China relations, a COVID-19 relief package and transition problems with the Trump administration.

While giving a speech following a briefing by members of his national security and foreign policy agency review teams regarding potential key challenges that the incoming administration is expected to face, Joe Biden has suggested that Washington needs to build a coalition of like-minded nations to confront Beijing.

"As we compete with China to hold China’s government accountable for its trade abuses, technology, human rights and other fronts, our position would be much stronger when we build coalitions of like-minded partners and allies that make common cause with us in defense of our shared interests and our shared values," he said.

Biden said partnering with other democracies on China would "more than double" the US economic leverage over the country. He added that no global problem could be solved by the US acting alone, including climate change and the coronavirus pandemic.

As Biden will occupy the White House for at least four years, many experts and officials around the globe have speculated that his presidency will represent a sharp break with Trump's foreign policy.

This is especially important for Beijing, since under the Trump administration US-China relations significantly deteriorated, with Washington accusing Beijing of unfair economic practices, human rights violations in some of its regions, encroachment on the special status of Hong Kong, and a lack of transparency regarding the coronavirus pandemic.

Biden accused the incumbent administration of withholding national security information and said his team had faced most of its obstruction of the transition process from the political branch of the Pentagon.

"From some agencies our team received exemplary cooperation, from the career staff of those agencies, from others - most notably the Department of Defense - we countered obstruction from the political leadership of that department," he said.

According to the president-elect, his team is not getting "all the information that we need from the outgoing administration in key national security areas." He added, that "it’s nothing short of irresponsibility."

Biden specifically mentioned the Office of Management and Budget as another example of a government department where his team was facing “roadblocks."

Among other things, Biden has expressed his support for a direct payment of $2,000 to all Americans as a part of a COVID-19 relief package.

“Yes,” Biden told reporters after his speech, when asked whether he supports the $2,000 one-time payment.

Last week, US President Donald Trump threatened to veto a COVID-19 relief and spending package passed by Congress if it did not include changes such as boosting stimulus payments from $600 to $2,000 for each citizen. House Speaker Nancy Pelosi expressed support for the move and urged Trump to call on Republicans in Congress to support it.

The US House is set to vote later on Monday on a measure to increase the payments to $2,000. It remains unclear whether the measure will pass both chambers of Congress.

The president-elect also pointed out that the US needs to modernize its defense priorities to meet strategic challenges from China and Russia, including in new realms such as cyberspace.

"We talked about the different strategic challenges we are going to face from both Russia and China and reforms we must make to put ourselves in the strongest possible position to meet those challenges. That includes modernizing our defense priorities to better deter aggression in the future," he noted.

Biden explained that the United States must innovate and re-imagine its defenses against growing threats in new realms like cyberspace rather than continue to over-invest in legacy systems designed to address threats of the past.

"We need to close the gap between where our capabilities are now and where they need to be to better deter, detect, disrupt and respond to those sorts of intrusions in the future. This is an area where Republicans and Democrats are in an agreement. We should be able to work on a bipartisan basis to better secure the American people against malign cyber actors," he said.

Biden added that US authorities are still learning about the extent of the recent massive hacking attack on government and private company networks and the vulnerabilities it exposed.

Several key officials have attributed the intrusion to Russian-backed hackers, although Moscow has denied any involvement. Addressing the issue during earlier briefings, Biden has threatened to retaliate.