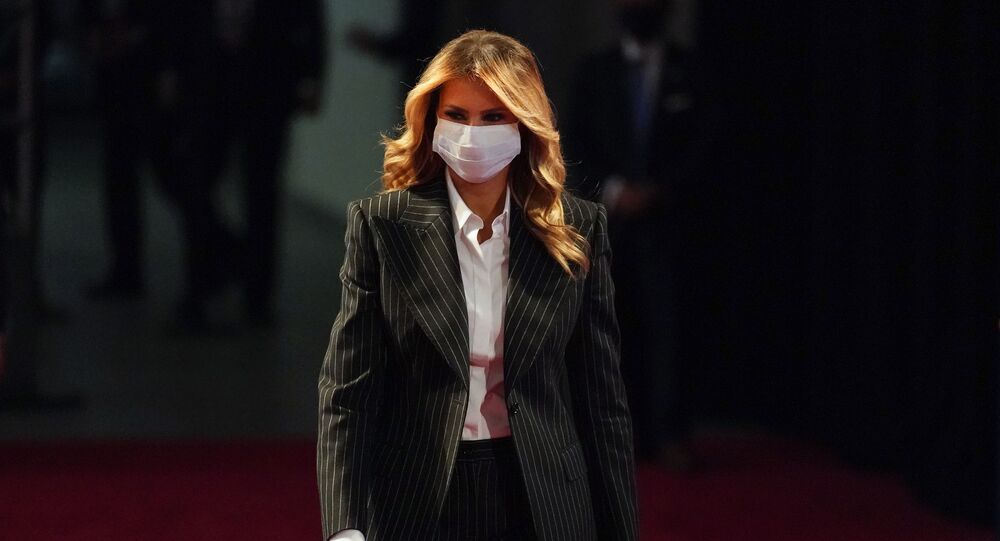 As Melania Trump is readying to vacate the East Wing, her residence and office for the past four years, the spotlight is on her role and the way it evolved throughout her husband's presidency, as well how (if at all) it was conveyed through the clothes she wore, among other things.

In contrast to her predecessors, there "won't be a signature style" with outgoing First Lady Melania Trump, suggested Lauren Rothman, a Washington-based stylist, as cited by the Financial Times.

"The storms don't sway her. She always looks perfectly put together", Rothman explains.

Arguably more than with any other first lady, Trump's oufits are interpreted through observers' own political lens, FT remarks. While for POTUS's GOP supporters the Slovenia-born ex-model is an immaculate wearer of Dior suits and Christian Louboutin stilettos, as well as a general role model of "uxorial loyalty", "the president's critics will say she's a fembot, a quiet trophy wife", says Kate Bennett, a CNN reporter at the White House and author of "Free, Melania: The Unauthorised Biography".

© AP Photo / Jacquelyn Martin
President Donald Trump, accompanied by first lady Melania Trump, gives a thumbs-up as they walk to Marine One on the South Lawn of the White House in Washington, for a short trip to Andrews Air Force Base, Md., then onto Texas to survey the response to Hurricane Harvey.

Nevertheless, there is nothing accidental in Melania's clothing selection.

"I don't believe in Melania Trump coincidences", when it comes to her wardrobe, Bennett says, arguing "she knows what she's doing".

"I have a theory that she wears menswear when they're fighting", she assumes, dwelling on Donald Trump's preferences in women's fashion.

"We know that Donald Trump likes very feminine women: eighties-throwback feminine — body-con dresses and short hemlines. When Melania wears a suit it's a moment of independence".

Bennett points to a "playful ambiguity" to how Trump dresses, citing Donald's infamous "pu**y grabbing" video, which surfaced at the height of his campaign in October 2016 and records him making salacious remarks about women years earlier.

Days after the video emerged, Melania Trump turned up at her husband's presidential debate wearing a fuchsia pussy-bow blouse by Gucci, with fashion connoisseurs and political analysts scratching their heads whether it was all about solidarity with the sisterhood or unconditional support for her Mr Right.

In a patriotic gesture, US first ladies have historically developed a close association with certain American designers, for instance, Kennedy and Oleg Cassini, Reagan with Adolfo and James Galanos, etc. Such a partnership has universally been seen as a signal of a certain political or social "markup". In 2010, David Yermack, professor of finance at the New York University Stern School of Business, estimated that Michelle Obama's public appearances in 2009 sparked instant gains of more than $5 billion in shareholder value for an array of businesses. Yet, the "Melania markup" never emerged, and the way that Mrs Trump dresses is a "missed opportunity" to spotlight something important, Yermack believes.

The political messaging through Melania's choice of outfits is quite complex, as follows from a book by her ex-adviser Stephanie Winston Wolkoff, "Melania and Me: The Rise and Fall of My Friendship with the First Lady".

"Melania loved the idea of getting to play designer for a day, but highlighting to the press that she and Hervé were both immigrants was out of the question. Her take was to let the clothing speak for itself and not to bother with the backstory".

While there were picks like the latter, which for instance could be meant to "balance out her husband's anti-immigration rhetoric", Melania also made sartorial choices that indicated her husband's policies hadn't in any way impacted her preferences in clothes and style.

For example, when the president promised to revive US industry and urged the country to "Buy American", his wife posed for her official first lady portrait in April 2017 in a chic black tuxedo suit by Italian designer Dolce & Gabbana. "Melania dresses how she thought she ought to dress as a first lady. That was her interpretation of it", says Isabel Spearman, a style expert and former special adviser to Samantha Cameron.

Either because of Melania's personal intent or other factors, like a few solo trips, for example, her fashion appearances are quite rare in the press, most of which is mainstream.

The other day, President Trump slammed top US lifestyle magazines for not placing his wife Melania on a single front cover during his four-year tenure, despite many praising her for her exquisite looks and posture.

In a tweet on Friday, Trump lauded the first lady as "the greatest of all time", while retweeting a Breitbart post that said "elitist snobs in the fashion press" were ostracizing the "most elegant first lady in American history".