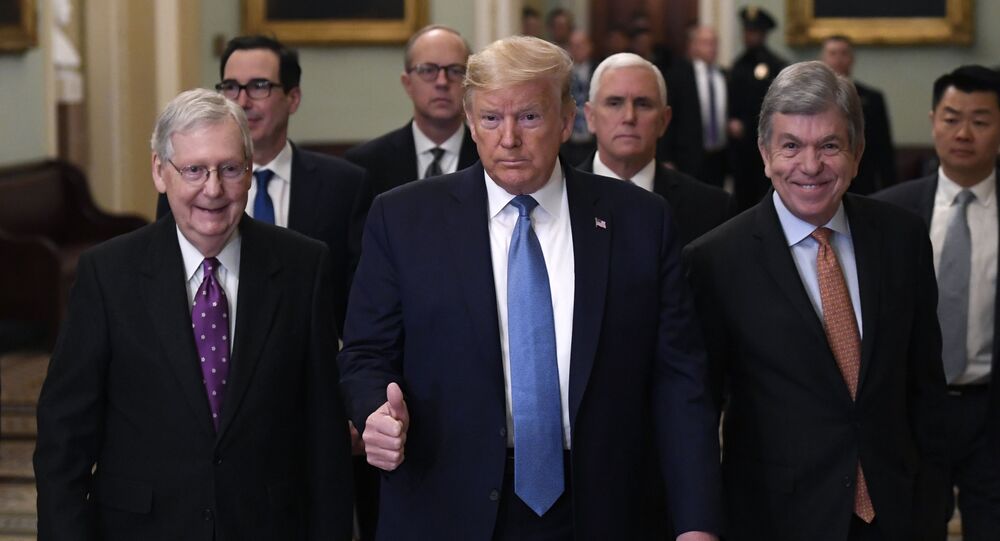 After the Electoral College vote on 14 December, Republican Senate Majority Leader Mitch McConnell for the first time addressed Joe Biden as "president-elect", congratulating him on the win and lauding him as “no stranger to the Senate”. A number of other top GOP members followed suit, triggering Trump’s disdain.

Incumbent US President Donald Trump has taken aim at Senate Majority Leader Mitch McConnell and other top-ranking Republicans, accusing them of failing the GOP’s fight against the outcome of the 2020 presidential election, which Trump insists was “rigged and stolen”.

As only a 6 January joint session on Capitol Hill separates Trump from vacating the White House, in the run-up to President-elect Joe Biden’s inauguration, Donald Trump suggested that Senate Republicans had done “nothing” to counter the alleged voter fraud, which had been "proved at a level never seen before".

He further drew parallels with the reactions of Democrats, were they to face a similar situation:

“The Democrat Senators would consider it an act of war, and fight to the death", Trump tweeted his disappointment. "Mitch & the Republicans do NOTHING, just want to let it pass. NO FIGHT!" he proceeded in his emotional tweets on Saturday.

If a Democrat Presidential Candidate had an Election Rigged & Stolen, with proof of such acts at a level never seen before, the Democrat Senators would consider it an act of war, and fight to the death. Mitch & the Republicans do NOTHING, just want to let it pass. NO FIGHT!

In follow-up posts, the incumbent head of state also called out the Justice Department and FBI, accusing them of turning a blind eye to “the biggest SCAM in our nation’s history, despite overwhelming evidence”.

"They should be ashamed. History will remember. Never give up. See everyone in D.C. on January 6th”, POTUS said.

Attorney General William Barr, who led the DOJ, notably spent his final day in the role on Wednesday, having earlier announced his intention to step down.

The “Justice” Department and the FBI have done nothing about the 2020 Presidential Election Voter Fraud, the biggest SCAM in our nation’s history, despite overwhelming evidence. They should be ashamed. History will remember. Never give up. See everyone in D.C. on January 6th.

Calling for Republican Senators to finally “step up and fight for the presidency”, like the Democrats would do “if they had actually won”, Trump cited “irrefutable” proof of the purported fraud, including “massive late night mail-in ballot drops in swing states” featuring Biden’s name, stuffed ballot boxes, double voters, dead voters, etc. He also retweeted a video from 24 December initially posted by his team that featured a compilation of CCTV records from polling stations and people’s accounts of voter fraud, such as discrepancies between sent-out ballot papers and the number of those received by electoral commissions, etc.

Trump’s tweets on Saturday all had a disclaimer attached to them saying "This claim about election fraud is disputed" - something that POTUS’ team has deemed as blatant censorship.

Also, on Saturday, Trump defended his legal team after reports that potential sanctions against them were being pursued by Dana Nessel, Michigan's attorney general, after the Trump campaign disputed the swing state’s election results, which were in the Democratic candidate’s favour.

"These lawyers are true patriots who are fighting for the truth and, obviously, getting very close", Trump wrote. "AG should be sanctioned. Fight on!"

After the Electoral College vote on 14 December, which confirmed 306 votes for Biden and 232 for Trump, Senate Majority Leader Mitch McConnell referred to Biden as "president-elect" for the first time, suggesting he was ready to accept the Democrat becoming the nation’s chief executive in less than a month.

A few other Republicans quickly followed in his footsteps.

"At some point, you have to face the music", Sen. John Thune of South Dakota told the Associated Press on Monday. "Once the Electoral College settles the issue today, it’s time for everybody to move on".

Trump and his team have been legally challenging the results of the election in key battleground states since the preliminary results started to come in.

Despite most of the court cases being rejected due to “lack of evidence”, and the Supreme Court also blocking the Republicans’ efforts, Trump has so far refused to concede, continuing to claim “massive election fraud” and asserting that the only thing he is after is a fair count of legal ballots. However, he recently instructed White House officials to get ready for the upcoming transition of power.