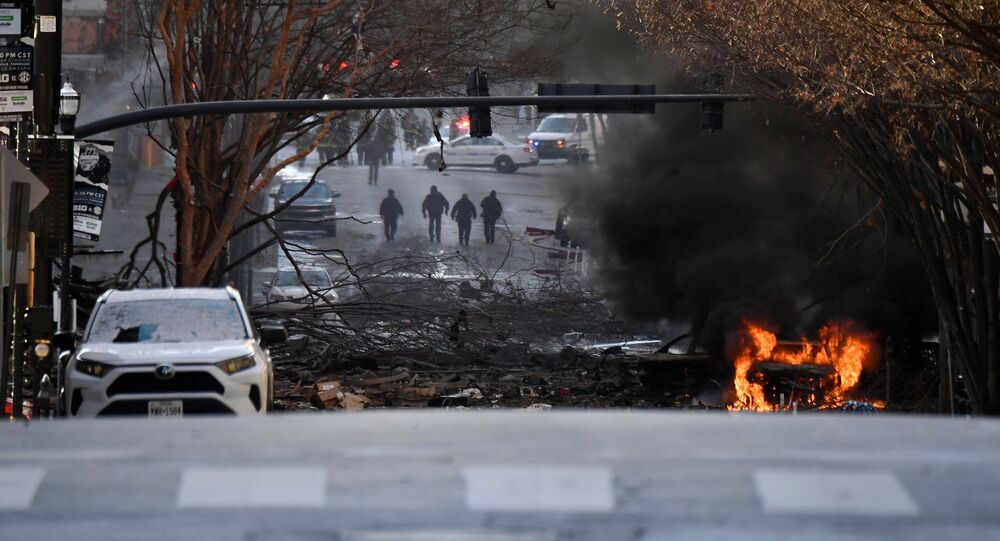 A powerful explosion hit downtown Nashville in the US state of Tennessee in the early hours of Friday. Several buildings were damaged, but no casualties have been reported yet, The Tennessean newspaper reported on Friday.

Emergency services arrived at the scene near Second Avenue and Commerce Street at about 6:45 a.m. local time (12:45 GMT) and attempted to put out the fire, the publication said. The Nashville Fire Department later confirmed that a bomb squad was dispatched to the scene of explosion, while local police announced that they have opened an investigation into the incident and will be conducting it with help from the FBI and the Bureau of Alcohol, Tobacco, Firearms and Explosives.

White House Deputy Press Secretary Judd Deere told reporters that President Donald Trump has been informed about the explosion in Nashville and that POTUS is being kept up-to-date on the incident.

Metro police said the explosion that rocked the city and damaged several buildings was linked to a parked vehicle and added that they believe it was "an intentional act". Law enforcement said they were responding to reports of a suspicious vehicle parked outside the offices of AT&T early in the morning when the explosion took place while the police were already en route to the site. The Tennessean newspaper reported, citing investigators, that an RV might have been involved in the blast.

Local website Scoop Nashville reported that a building collapsed after the explosion, but authorities are yet to confirm the amount of damage caused in the city due to the blast. Police said three people have been hospitalised with injuries as a result of the explosion, although none of them are in critical condition.

Nashville Mayor John Cooper said he had examined the destruction in the area, noting that around 20 buildings were damaged in the blast. Following his address, the authorities announced the establishment of an emergency operations centre (EOC) "in response to an intentional bombing incident".

Video of smoke from the explosion near the Broadway area in Nashville.
Sent in to the @WSMV newsroom from a viewer.

I hope everyone is safe and okay. pic.twitter.com/e1lHTRdWLT

#BREAKING there’s been some type of explosion in Downtown Nashville. Authorities are trying to figure out what happened. pic.twitter.com/QOt4cMH1Fl

​The local fire department has asked residents to avoid the area in the vicinity of the blast.

Serious damage in Nashville after its reported that an RV exploded this morning. #Nashville pic.twitter.com/kl2z4dY1yR

First Videos of Explosion Aftermath Near US Embassy in Tunis Emerge