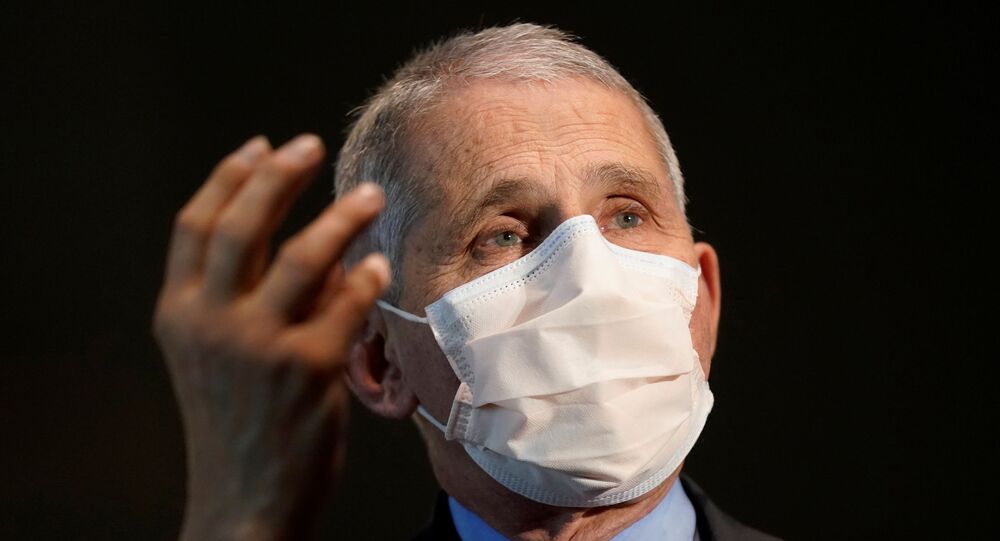 America’s most prominent immunologist Dr. Anthony Fauci, a leading member of the White House Coronavirus Task Force, does not have unequivocal support among the US public – many, including President Trump, have at one point branded him an “alarmist” over his COVID-19 risk warnings.

DC Mayor Muriel Bowser surprised many this Wednesday when she announcing on Twitter that this year’s Christmas Eve, on 24 December, would be proclaimed ‘Dr. Fauci Day’ in Washington to commemorate the 80th birthday of America’s chief coronavirus expert.

“Dr. Fauci has been a hero to our nation during this incredibly difficult year, working tirelessly to save lives and guide our nation’s response to and recovery from the pandemic,” Bowser said in a statement.

“We are incredibly proud to count Dr. Fauci among the many DC residents who are sacrificing so much to keep our communities healthy and safe,” she then tweeted.

We are incredibly proud to count Dr. Fauci among the many DC residents who are sacrificing so much to keep our communities healthy and safe. pic.twitter.com/UqvS4sebMf

​In a tweet, the mayor shared a copy of the proclamation that formalised the announcement, which referred to Dr. Fauci as “a shining light in dark times for the nation, promoting truth over fear and giving Americans hope in their government”.

The statement’s also praised Fauci’s commitment to serve “as a chief medical advisor in the incoming Biden Administration” and his love for the Washington Nationals baseball team.

The photo of a double-masked Fauci accepting the declaration was also shared by the mayor, who called upon her fellow Washingtonians to join her in wishing Fauci “the happiest of birthdays”.

Some have indeed followed her call on Twitter – but many have questioned the idea of turning the prelude to the Christian holiday into a moment of worship of one man.

Can't think of anyone who deserves a day or a week in his honor more.

This is absolutely ridiculous to prop up these people. He's an expert who's analysis should carry weight but not be revered or seen as a deity. He's also been as wrong as anyone else has in the entire world during this craziness. It's also Xmas Eve so No.

Fox News host Tucker Carlson also decried Bowser’s decision to turn Fauci into the “Patron Saint of Wuhan”, while sharing a mocking image of the immunologist photoshopped to resemble an icon.

Jajajaja. Tucker Carlson is THE BEST!!!!
Anthony Fauci; The first 2020 Pagan Idol... and the last one. pic.twitter.com/W1lJKdQ3OQ

“Now you sometimes hear people refer to the political divide in our country as between the religious and the secular, but that’s not really true. The truth is, everyone in this country has a religion, whether you worship god or worship yourself – those are America’s two competing faiths,” Carlson decried in his report.

For the reporter, Washington resembled the “Rome of spiritual narcissism” where “human power is worshipped as the living God”.

“You’ll see temples to human power throughout the city as well as smaller shrines to its saints. The latest holy man to be beatified there is a diminutive federal bureaucrat called Tony Fauci,” the host continued.

Many have found Carlson’s take on the situation hilarious. And although not everyone was ready to dig that deep into his philosophical underpinnings about the purported religious divide in the country, some members of the public were simply not willing to trade Christmas Eve for the birthday of the US top health expert.

DC Mayor Proclaims Christmas Eve "Fauci Day"?!?
How can they celebrate this fool if they're trying to scare us with "It's getting worse!"?
I guess the same way they can say the flu dropped significantly due to masks,
but Corona got worse while wearing said masks.
🤡🌎🤦‍♂️ pic.twitter.com/njIKet2xpq

Fauci, who has been the director of the National Institute of Allergy and Infectious Diseases since 1984, was branded “a little bit of an alarmist” by US President Donald Trump during the summer, for repeatedly warning about the severity of the coronavirus pandemic. Fauci responded to the president’s remark by saying that he was actually more of a “realist” and an “optimist”.