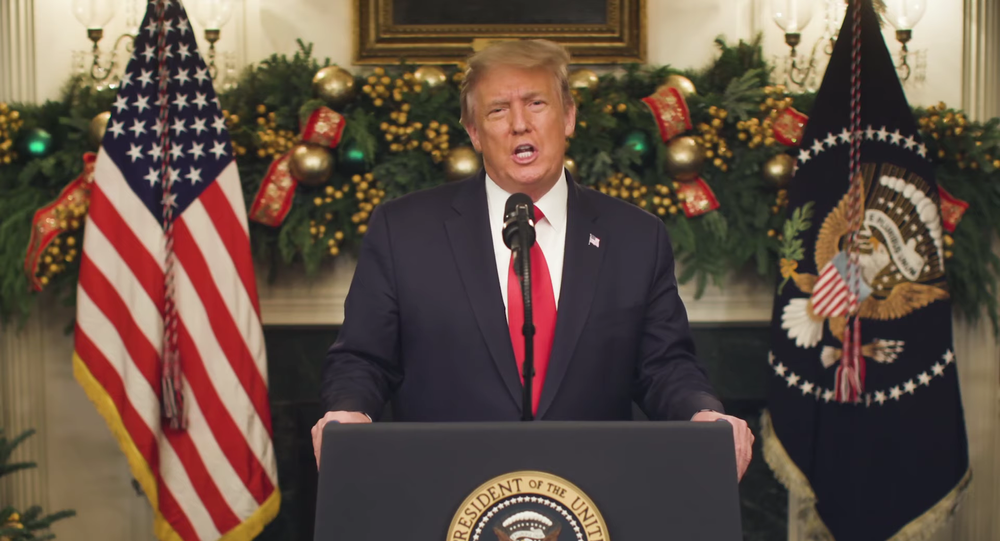 Both houses of the US Congress have passed another massive financial spending bill amounting to over $900 billion. But critics have pointed out that substantial sums will be sent to other countries or used for programmes that have little or nothing to do with assisting everyday people and smallbusinesses amid the COVID-19 pandemic.

US President Donald Trump issued a scathing rebuke of the COVID-19 financial relief bill that is being sent his way to sign, in a video already seen by millions of people and that was posted via his Twitter account, in the evening of 22 December 2020. He called the bill "disgraceful" and said that it has "almost nothing to do with COVID".

The president argued that, after months of obstruction by Democrats, negotiations over a "new package to get urgently needed help to the American people" commenced. But despite "taking forever" to be finalised, Trump lamented, the latest bill that Congress has passed "is much different than anticipated".

​"[A]mong the more than 5,000 pages in this bill, which nobody in Congress has read because of its length and complexity, it's called the COVID relief bill, but it has almost nothing to do with COVID" Trump said.

​Speaking from a podium at the White House, President Trump started to list spending items in the bill which he heavily criticised for not assisting ordinary Americans or small businesses.

"This bill contains $85.5 million for assistance to Cambodia $134 million to Burma. $1.3 billion for Egypt and the Egyptian military, which will go out and buy almost exclusively Russian military equipment, $25 million for democracy and gender programs in Pakistan, $505 million to Belize Costa Rica, El Salvador, Guatemala, Honduras, Nicaragua, and Panama, $40 million for the Kennedy Center in Washington, DC, which is not even open for business".

China and "illegal alien" bashing notwithstanding, this is a smart move. Who will argue against giving the people more?
Trump moved to Pelosi's left and will get people more money. Just one more reason to #ForceTheVote.
Bwahahahaha! https://t.co/QS5botGoTP

"$1 billion for the Smithsonian and an additional $154 million for the National Gallery of Art. Likewise, these facilities are essentially not open. $7 million for reef fish management, $25 billion to combat Asian carp, $2.5 million to count the number of amberjack fish in the Gulf of Mexico, a provision to promote the breeding of fish in federal hatcheries $3 million in poultry production technology, $2 million to research the impact of down trees, $566 million for construction projects at the FBI".

Thank you Mr. President.
This was garbage. pic.twitter.com/2BYhn6yU0M

​There has been intense pressure building up on the US government to offer some form of stimulus relief bill to assist ordinary Americans at a time when millions face potential eviction from their homes and the number claiming unemployment assistance increased by 137,000 in the week ending 5 December. The current bill would extend a one month moratorium on evictions and offers $25 billion dollars for rental support.

In his late night address, delivered from a podium at the White House, the president said that he is "asking Congress to amend this bill and increase the ridiculously low $600 to $2,000 or $4,000 for a couple". He also said that he is asking Congress "to immediately get rid of the wasteful and unnecessary items from this legislation and to send me a suitable bill or else, the next administration will have to deliver a covenant relief package".

The reactions on social media to Trump's criticisms ranged dramatically.

Not So Fun Fact:

Trump's body count is over 5% of Hitler's now.

That's only the 323,000 he intentionally killed with Covid. If you factor in the people he murdered in Puerto Rico, the mass shootings he inspired, & the reporters he got killed, it's even higher.

It has to end.

Open your eyes! He’s not doing it for us or out of the kindness of his heart. He’s doing it to hurt this country. Would $2k be nice? Absolutely! But not at the expense of this country. I’m perfectly fine with $600. It’s better than nothing. At least we’re getting something.

TRANSLATION: I’m going to revert the bill to an impossible situation where neither side can agree again to ensure no payments go out while I look like a hero & Biden walks into a worse economy because of it.

Sad thing is Trump supporters are dumb enough to believe it 🤦‍♂️

I agree with the points made in this video, but we're on a tight schedule. Sign the bill and let the new administration fix the issues.

​Democratic Congresswoman Nancy Pelosi, who is Speaker of the House of Representatives, responded to the president's call to action by saying that she would support an increase in the one-off payment to be given to ordinary Americans.

​Pelosi was criticised, even by members of her own party such as Congressman Ro Khanna, for refusing to agree to an earlier version of the stimulus bill that would have given Americans $1,200 compared to the current offer of $600.

​The president compared what he claimed the bill offers to "family members of illegal aliens", which is the ability to get up to $1,800, to that which US citizens get. "This is far more than the Americans are given, despite all of this wasteful spending and much more than $900 billion package provides hardworking taxpayers with only $600 each in relief payments and not enough money is given to small businesses".

"Congress found plenty of money for foreign countries, lobbyists and special interests" Trump said, noting that American people will get "the bare minimum" despite the situation not being "their fault". He then said that it was "China's fault".

The video of Trump's speech went viral online and has been viewed over 16.9 million times so far at the time of publishing this article. Even if the president refuses to sign the current COVID relief bill, it could still be forced through by Congress if there is a sufficient majority of representatives that support it.