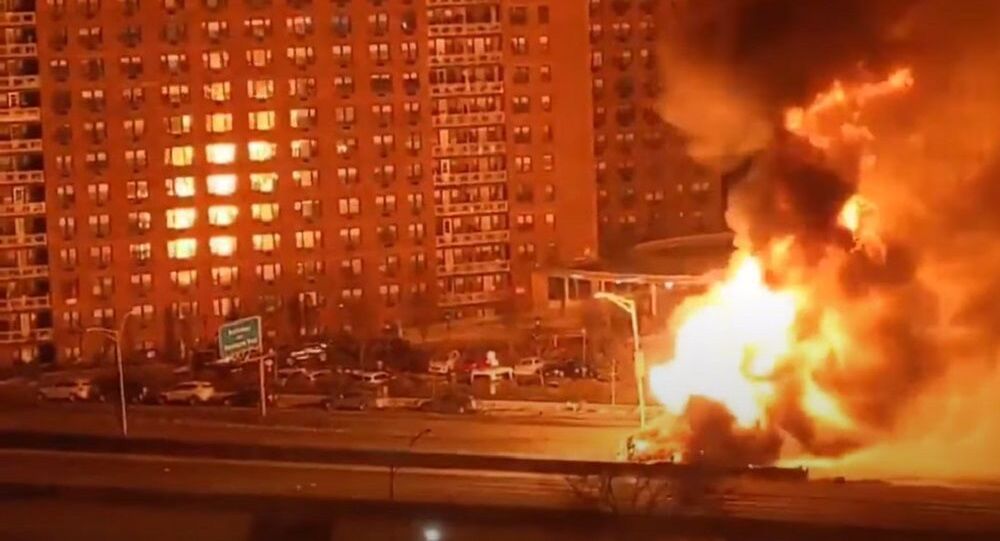 The terrifying footage shared online showed a ball of flames as high as a multi-storey apartment block hovering in the sky above a New York City motorway.

Deafening explosions resounded amid fireballs of flames and billowing smoke on Tuesday morning as a truck carrying hundreds of propane tanks overturned on the Long Island Expressway (LIE) approximately after midnight (5am GMT) on 21 December.

​As multiple fireballs ripped through the sky, both westbound lanes of the New York City motorway were sealed off for several hours.

​Miraculously, the driver escaped unharmed, reportedly sustaining only minor injuries and refusing medical treatment at the scene. He was quoted by police as claiming he had been cut off by another vehicle. Swerving in a bid to avoid it, his truck overturned and burst into flames.

Here's a video. You can hear the explosion. I can't see clear what kind of car from my side. I am sure people from the building across may have better shot. pic.twitter.com/iCB0BovEzO

​Firefighters were quickly summoned to the scene to contain the blaze, spending several hours putting out the conflagration and cleaning up the propane tanks. No other injuries were reported in the incident.

Although no evacuation orders were issued, surrounding apartment blocks shook as the accident triggered a series of explosions, in apocalyptic scenes captured by eyewitnesses from nearby apartment buildings and passing cars, in footage that was shared extensively online.

The 18 wheeler on the Horace Harding Expressway seems to be burning nicely.
Ht @CordellTraffic https://t.co/48aLVkasuL