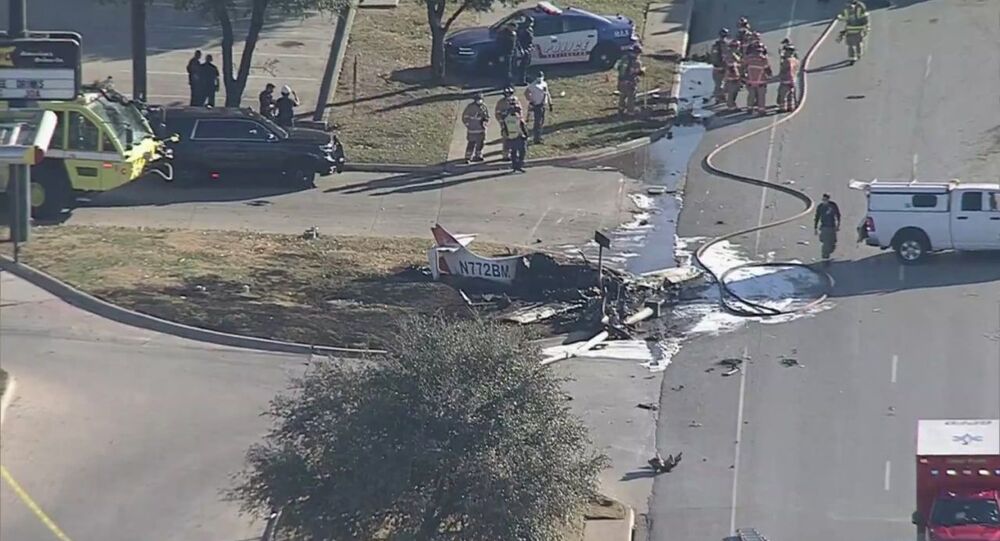 According to the local fire department, the aircraft was a 2-passenger plane that left Grand Prairie Municipal Airport in Texas at 2:45 p.m. local time. Currently, the cause of the incident is unknown.

The small plane crashed shortly after takeoff near Highway 360 and Mayfield Road in Texas on Monday, after struggling in the sky for a while, the Grand Prairie Fire Department stated on Twitter.

The local TV channel reported that the plane was "clearly struggling", according to eyewitnesses, hitting a telephone pole and then the back of a passing truck, after which it caught on fire before landing near a Sonic restaurant by the road. It is not yet known what specific type the crashed aircraft was.

The pilot was reportedly pronounced dead at the scene, though the exact number of passengers inside the aircraft remains unknown. The fire department has asked drivers to avoid the area of the plane crash.

GPFD has responded to a two-passenger plane crash near Highway 360 and Mayfield Rd. Details to follow. Please avoid the area.

​Videos and photos have begun to appear on social media showing the results of the plane crash and the work of the emergency crews on site.

DEVELOPING: Small plane crashes near Sonic restaurant in Grand Prairie, Texas; no word yet on the condition of the pilot or injuries on the ground.

Multiple people killed in plane crash in Grand Prairie.
“I can tell you there are fatalities, I just can’t tell you how many, “ reported #GrandPrairie Fire Chief Robert Fite.#GrandprairieTexas #Texas

🚨Tap the link below to read the full news:https://t.co/JZfxFgWHrl pic.twitter.com/qgJyIxeHKl

​A witness to the crash took to Twitter, describing the incident as it happened.

I literally watch a plane crash right in front of me. Like the plane almost hit our car

One Dead After Plane With Tonne of Cocaine Aboard Crashes in Guatemala, Police Say