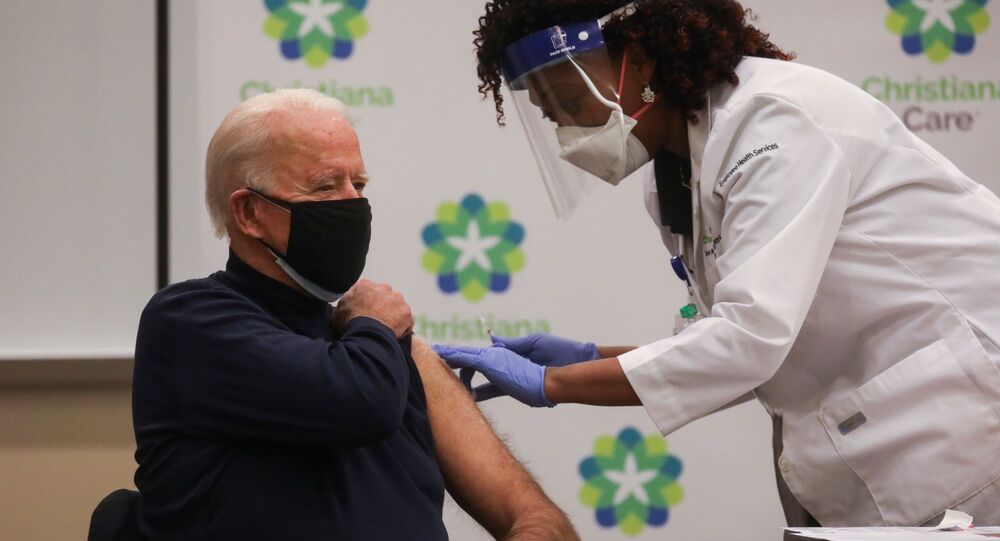 The latest moves by US President-elect Joe Biden come after top government officials such as Vice President Mike Pence and Surgeon General Jerome Adams were publicly vaccinated as part of a campaign to assure Americans of the vaccine's safety amid widespread skepticism.

Biden received his first of two doses of the Pfizer-BioNTech COVID-19 vaccine on Monday during a televised event at Delaware's ChristianaCare Hospital. The event that took place on the same day that Moderna's vaccine began arriving at locations in several US states.

The president-elect stressed to viewers that he was undergoing immunization in order to "demonstrate that people should be prepared when it's available to take the vaccine."

"There's nothing to worry about. I'm looking forward to the second shot," he added, also noting that the Trump administration "deserves some credit getting [vaccine efforts] off the ground" through Operation Warp Speed.

​​Biden was accompanied by his wife Jill, who had received the vaccine earlier in the day.

Although Biden hailed the vaccine and its effectiveness against SARS-CoV-2, the virus that causes COVID-19, he also took the opportunity at the event to tell Americans that countermeasures against the respiratory disease still need to be followed.

"It's going to take time," he stressed.

Biden's running mate Sen. Kamala Harris (D-CA) and her husband Doug Emhoff are expected to be vaccinated sometime next week.

At present, the rollouts of the Pfizer and Moderna vaccines are very much in the early stages, with doses being prioritized for first responders and nursing home staff and residents. Over the weekend, it was suggested by health experts that the next phase in vaccine deployment should see those aged 75 and older or frontline essential workers be next up to receive their first COVID-19 vaccine doses.

Both vaccines approved by the US Food and Drug Administration showed an efficacy of over 94% and require individuals to return to a health professional for a second dose to protect oneself against the disease.

The Biden event comes after several US officials, such as Pence, Adams, US House Speaker Nancy Pelosi (D-CA) and Senate Majority Leader Mitch McConnell (R-KY), were vaccinated in recent days.

US President Donald Trump, who was previously diagnosed with COVID-19, has yet to receive the vaccine. Adams previously explained that Trump has not received the vaccine because he was treated with monoclonal antibodies.

The latest data from Johns Hopkins University indicates that the US has recorded nearly 18 million COVID-19 cases, having added 189,099 as of Monday. US states California, Tennessee, New York, Texas and Florida have reported the highest daily case numbers.