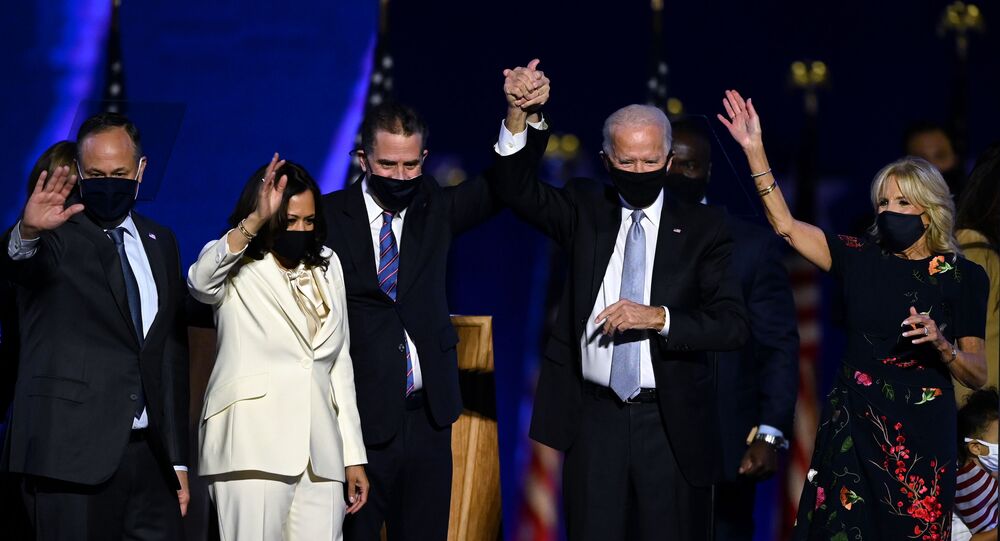 Earlier this month, Hunter Biden confirmed that he is under federal investigation over what he described as "tax affairs" pertaining to his business in Ukraine and China.

President-elect Joe Biden has again stood up for his son in connection with an ongoing probe into Hunter Biden's taxes by the US Attorney's Office in Delaware.

In an interview with CBS Evening News, the president-elect expressed "great confidence" in his son, adding that he is "not concerned about any accusations" made against Hunter.

"I think it's kind of foul play, but look, it is what it is and he's a grown man, he is the smartest man I know – I mean from a pure intellectual capacity – and as long as he's good, we're good", Joe Biden underscored.

According to the Biden transition team, the president-elect was referring to Republicans' protracted attacks on Hunter rather than the investigation itself when speaking of "foul play".

The interview comes a few days after Joe Biden told Fox News he is "confident" that Hunter "did nothing wrong".

This was only the second time that Biden has commented on the issue since it was made public earlier in December, The Hill reported, pointing out how the president-elect told reporters "I'm proud of my son" when "asked if Hunter had committed a crime".

Last week, Hunter Biden confirmed he is under federal investigation over his "tax affairs" linked to business dealings in Ukraine and China as Fox News claimed that he had failed to report some $400,000 in income he received from the Ukrainian energy company Burisma Holdings.

"I take this matter very seriously but I am confident that a professional and objective review of these matters will demonstrate that I handled my affairs legally and appropriately, including with the benefit of professional tax advisers", Hunter said in a statement.

The developments follow a scandal in October, when the New York Post published an article about two alleged emails that Hunter Biden had purportedly received from a top official at the Ukrainian energy company Burisma while he was on the board of the firm.

© AP Photo / Pablo Martinez Monsivais
Bigger Than 'Notebook From Hell'? Hunter Biden Reportedly Probed Over Foreign Ties, Money Laundering
In a May 2014 email, Burisma board adviser Vadym Pozharskyi asked Hunter Biden to "use [his] influence" to politically support the Ukrainian company, while in another email, dated April 2015, Pozharskyi thanked the younger Biden for arranging a meeting with his father.

Was US Intelligence Community Involved in Suppressing Hunter Biden Story?