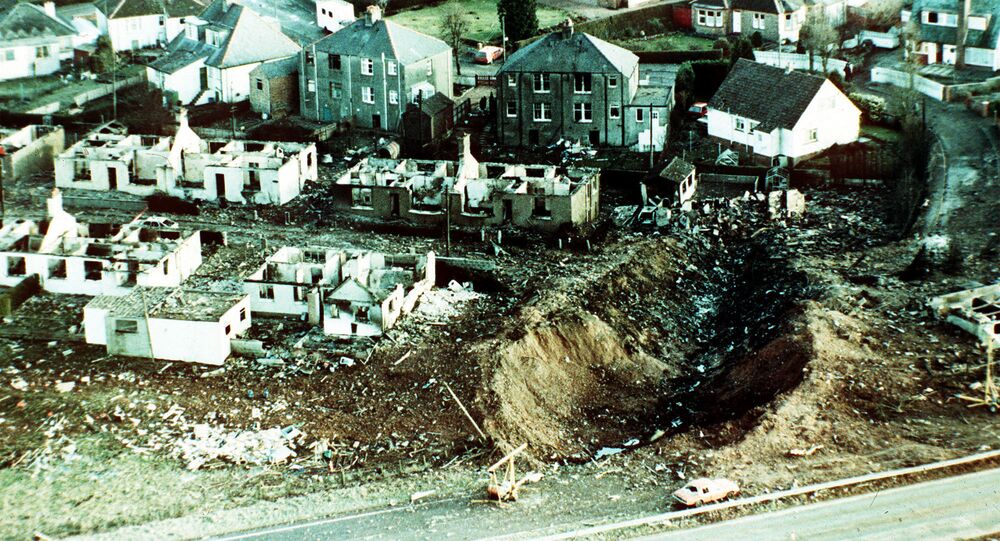 As US Justice Department Prepares to Charge New Lockerbie Suspect, What Actually Happened?

Four days before Christmas in 1988 Pan-Am Flight 103 exploded over the Scottish town of Lockerbie. The plane, which was flying from London to New York, had been brought down by a bomb but who planted it and why?

The US Justice Department reportedly plans to charge a new suspect in connection with the infamous bombing of a Boeing 747 in 1988.

The Wall Street Journal reported the man in question was Abu Agila Mohammad Masud, who allegedly worked as a bombmaker for President Muammar Gaddafi.

​On 21 December 1988 a bomb exploded in the plane’s cargo hold, killing all 258 people on board and another 12 on the ground in the small town of Lockerbie in southern Scotland.

The plane had only taken off an hour earlier from Heathrow Airport and on board were 190 Americans, including 35 students from Syracuse University in upstate New York who were flying home for Christmas after a semester in London.

Abu Agila Mohammad Masud is currently held in Libya, but the US Department of Justice is expected to seek his extradition for trial in the U.S. https://t.co/NY55rEQclG

​Like the 9/11 attacks, the attack came completely out of the blue and British Prime Minister Margaret Thatcher was caught off guard, as was the US President-Elect George H.W. Bush and the outgoing President, Ronald Reagan.

MI6 and the CIA began to compile a list of suspected nations and terrorist groups who might have carried out the atrocity.

Top of the list was Libya, whose quixotic ruler Colonel Muammar Gaddafi was often accused by the US of supporting acts of terrorism against US targets, including the 1986 bombing of a nightclub in West Berlin popular with American service personnel.

1/People don't know why Rouhani has tweeted this. I've written about this before. Rouhani is admitting it was Iranians who blew up Pan Am Flight 103 in #Scotland in 1988(Lockerbie bombing).More important question is:Who in Iran planned and directed this attack in Scotland?THREAD https://t.co/r63hucHaAF

​In April 1986 President Reagan had ordered the US Air Force to bomb Libya and Gaddafi’s daughter Hana was killed during one air raid.

The investigation into the Lockerbie bombing was launched by Dumfries and Galloway Constabulary, the tiny police force responsible for the area around the town. They were assisted by MI5, MI6, the FBI and the CIA.

© AP Photo / Martin Cleaver, File
A police officer walks by the nose of Pan Am flight 103 in a field near the town of Lockerbie

In November 1991 indictments were initiated against Abdel Baset al-Megrahi, a Libyan intelligence officer and head of security for Libyan Arab Airlines, and Lamin Khalifah Fhimah, LAA’s station manager at Luqa airport in Malta.

Malta was at the heart of the allegations of Libyan involvement. It was claimed the bomb was placed in a brown Samsonite suitcase - bought by al-Megrahi in Malta - and smuggled aboard a plane to Frankfurt, where it was then transferred on a flight to London and eventually ended up on Flight 103.

In 1992 the UN Security Council imposed an arms sales embargo and air travel sanction on Libya.

The sanctions were later lifted after Libya agreed to hand over the suspects and pay US$2.7 billion compensation to the victims' families.

In 2000 al-Megrahi and Fhimah went on trial, under Scottish law, at a special court in the Netherlands.

Al-Fhimah was convicted but al-Megrahi was found guilty and jailed for life and was told he must spend a minimum of 27 years in a Scottish prison.

But al-Megrahi’s conviction was questioned and in 2007 the Scottish Criminal Cases Review Commission recommended he be granted a full appeal.

His lawyers claimed the only evidence against him was the uncorroborated claims of Maltese shopkeeper Tony Gauci, who identified al-Megrahi as having bought 12 items of clothing found in the Samsonite suitcase holding the bomb.

In August 2009, with relations between Britain and Libya fully restored, al-Megrahi was released on compassionate grounds. He died three years later, from prostate cancer.

But in 2017 his family launched a new posthumous appeal against his conviction and last month five Scottish judges began hearing the case.

It’s good for Karol Sikora that so many of the exact sort of people who once denounced him - for being paid by the Libyan govt and saying the Lockerbie bomber only had three months to live - now love him for his Covid stuff. Media medics: you CAN turn your critics round!

​Although Libya had admitted, in 2003, that it was responsible for the bombing there are many who still believe Gaddafi was made a scapegoat.

Jim Swire, whose daughter Flora died, has always believed Iran brought down the plane in revenge for the shooting down of an Iranian airliner by the USS Vincennes in July 1988.

Mr Swire said he found the news of the new Libyan suspect “unwelcome” and cast doubt on the involvement of Masud, who is currently being held by the US-backed Libyan government in Tripoli.

Much of the new evidence linking Masud with the bombing is understood to come from an investigation by journalist Ken Dornstein, whose brother David was killed on Flight 103. He has described Masud as a shadowy figure.

Dornstein reportedly pored through CIA and Stasi records of Libyan terrorist attacks in Europe and found Masud's name in a declassified CIA cable, based on an interview with an informant, which claimed Masud had travelled with al-Megrahi to Malta in December 1988.

*Amazing* development: a few years back I wrote a piece about the documentary filmmaker Ken Dornstein, whose older brother, David Dornstein, was killed in the 1988 Lockerbie bombing. Ken spent the next 25 years obsessively investigating the incident (1/3) https://t.co/ixweRJEkCP

​He told AFP: "I can't see the connection between these new allegations and the Lockerbie story.”

The US will seek to extradite Masud to stand trial in the United States, but questions will remain about whether Libya was not just a convenient scapegoat.