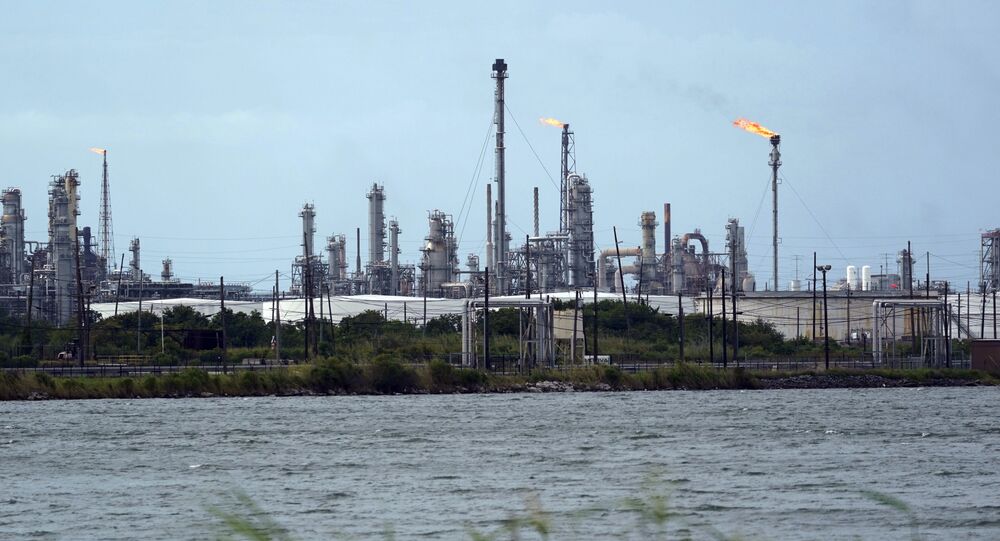 Banning new oil and gas permits on US public lands is one of the biggest campaign pledges of President-elect Joe Biden, made in favor of fighting global climate change. Its aim is to curb the US emissions of greenhouse gases that are warming our planet's atmosphere.

The impact of the promised ban on new oil-and-gas permits on federal lands in the name of fighting climate change of the upcoming Biden administration could be significant for state economies in the western US involved in production, The Washington Times reported Wednesday, citing research from the University of Wyoming.

According to the study, "The Fiscal and Economic Impacts of Federal Onshore Leasing and Drilling Bans", conducted for Wyoming Energy Authority, the industry-wide ban will result in $670 billion in lost GDP among the eight states by 2040 and see over 72,000 jobs lost each year over a first Biden presidential term.

Moreover, the ban does not guarantee a reduction of global greenhouse gas emissions.

The eight states examined were Wyoming, New Mexico, Colorado, Utah, Montana, North Dakota, California and Alaska, which account for some 97% of oil-and-gas extraction on federal lands. The research focused on the economic outcomes of Biden's decision to ban drilling or leasing, or both.

The US president-elect promised a prohibition on "new oil and gas permitting on public lands and waters", although he has not detailed the policy.

The research was conducted by a professor of energy economics, Timothy Considine, who warned that OPEC would benefit from the policy.

The federal government owns nearly a half of the land in the 11 Western states, so whether the ban hits drilling or leasing on public lands, the economic predictions "are devastating, to be blunt", according to Wyoming Governor Mark Gordon, in referring to his state.

“These funds fund our schools, fund the important work we do for wildlife, mitigation corridors, the work we’ve done to do a better job on drilling, really advance all of our production efforts and technologies,” the Republican governor said during a virtual press conference.

Estimated job losses would reach 351,555 annually by years 2036 through 2040, according to the regional study. By 2040, GDP in the states would drop by $670.5 billion, with oil-and-gas investment falling by $389 billion and state tax revenue decreasing by $159 billion, according to the study.

The air pollution reduction worth an economy

According to the Washington Times report, after four years of the Trump administration's fossil-fuel-friendly policies, which helped the country achieve net energy independence for the first time since 1957, Biden is now under pressure from left-wing environmental activists, demanding he deliver on his promise for regulation to create vast greenhouse gas reductions. The US is doing well in lowering greenhouse gases emission, according to some, to date emissions fell by almost 5% from the last two years, according to the Washington Times citing a report last month from the Environmental Protection Agency.

The president-elect, however, has vowed to achieve a much more ambitious goal of total zero emissions by 2050.

"Policy has both intent and consequence, and the intention of this prospective policy is at least in part to reduce emissions by some significant level, and obviously the economic impact is the consequence,” the newspaper quotes Glen Murrell, executive director of the Wyoming Energy Authority, warning that oil and gas drilling or leasing bans do not necessarily result in better air.

Lower US production will likely be compensated by production growth in other regional oil-producing countries such as Mexico, Canada, Saudi Arabia and Russia.

"It’s hard for me to understand how the intent will be delivered on because oil and gas, particularly oil, is possibly the most globalized commodity the planet has ever seen," Murrell said. "By reducing production from federal lands, you don’t reduce consumption, and consequently, you don’t reduce emissions".

According to Murrell, a ban is "a rather inefficient policy" which has very high economic impact, "certainly in some locations like Wyoming, but a very low return with respect to its intent".

Biden's pledge to ban drilling on public land during the presidential campaign meets with his intention to not ban hydraulic fracturing, which caused an energy boom in the key state of Pennsylvania.

Instead, the ban on federal permitting on public lands would cause huge impacts almost entirely in Western states, most of which are also Republican.

"He needed to win Pennsylvania, so he couldn’t ban fracking nationwide, like his party’s left flank wants, so he did the next best thing on the areas he can control more,” according to president of the Western Energy Alliance, Kathleen Sgamma. "So he doesn’t think he’s going to pay a political price from the Western states because most of them are red states, and he’s willing to go after federal lands, but the fact is he would be sacrificing hundreds of thousands of jobs."

According to the Washington Times, Sgamma expressed hope that the study would convince Biden's team to not pursue the bans, and stated that if the president-elect inflicts the prohibition, her organization's lawyers "will be in court within hours".

As part of his environmental pledges, Biden promised his climate and energy plan would create 10 million clean-energy jobs deploying the "largest investment in history in American innovation — including research and innovation to unlock and deploy new zero-carbon technologies for the future".

Concurrently, Wyoming's Gordon said that, currently, clean-energy jobs are often in construction, meaning they are "short-term jobs", contrasting with "the longer-term jobs that we see in sectors like oil and gas and also in coal".

"I think it is absolutely imperative that as we discuss transition, we also think about the side effects of any particular policy," Gordon said. "And that means really trying to find that finding that equilibrium that not only does a good job for the climate, but provides good equality jobs that last for a long time and stabilize communities."

Last month the Trump administration, the White House helped its allies in the oil and gas extraction industry prior to the January 20 inauguration, offering some 319,700 sq. kilometers (79 million acres) of leases in the Gulf of Mexico, and selling nearly 2,100 sq. kilometers (518,000 acres).

The Trump administration also announced plans to auction off, before Biden's term starts, the rights to drill in the Arctic National Wildlife Refuge.