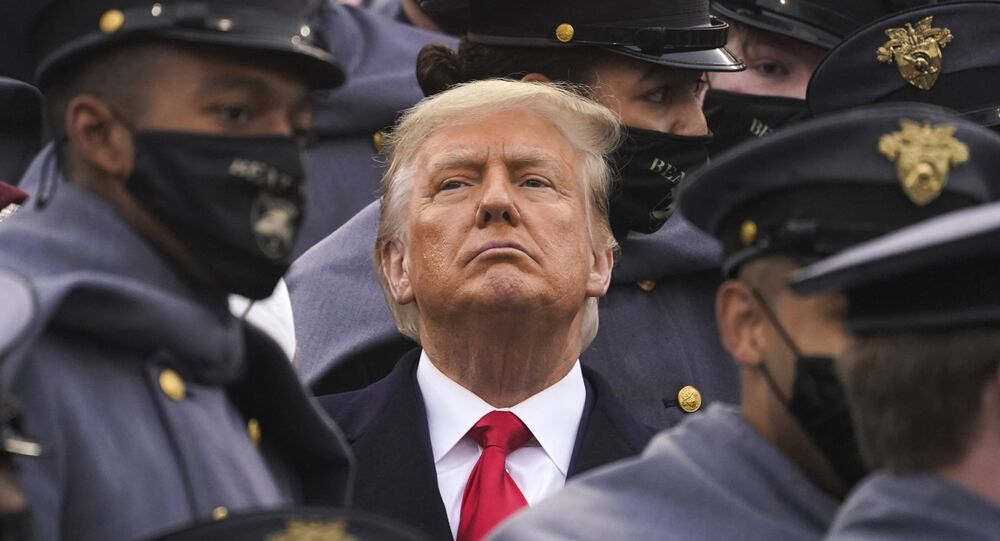 As Joe Biden is now presumed to take up the presidency of the United States in January, the outgoing Trump administration is reportedly set to use its powers of executive clemency to shield close allies from future prosecution.

As the Trump administration comes to an end, the White House has received a myriad of requests from people seeking a presidential pardon.

According to a report by CNN, requests for pardons or commutations have been made to such a degree that a spreadsheet has been put together to better organise the number of appeals made directly to Trump's closest aides.

Citing unnamed sources close to the White House, CNN reported that those seeking presidential clemency have approached the administration directly through Trump's son-in-law and senior adviser, Jared Kushner, as well as the White House chief of staff, Mark Meadows, and a White House counsel, Pat Cipollone, if Trump is not available to speak.

"It's turned crazy," one anonymous person familiar with the efforts said. "There's a lot of activity".

The anonymous source claims that "everyone assumed there's no formal process and they should reach out to the administration directly", according to CNN

Those who the president knows personally or have well-connected parties vouching on their behalf appear to be first in line for the potential presidential pardon.

© AP Photo / Evan Vucci
President Donald Trump displays the $1.5 trillion tax overhaul package he had just signed, Friday, Dec. 22, 2017, in the Oval Office of the White House in Washington. The bill provides generous tax cuts for corporations and the wealthiest Americans, plus smaller cuts for middle- and low-income families.

According to CNN, at least one person working for clients looking for pardons said they hoped that their past loyalty to Trump throughout his single term in office would now turn lucrative.

Reports say that Trump is basing his decisions on loyalty, just as Republicans are jumping ship to work with the incoming Joe Biden administration and not backing the president's continued claims that the 3 November election was won due to voter fraud.

Advisers and associates who have not backed him in his attempts to overturn the elections have been largely disregarded. One person who reportedly used to be in frequent contact with Trump, but who urged the president to calm his election fraud claims, has not heard from the president for weeks.

The CNN report claimed that over two dozen people in Trump's closest circle are being considered for pardons, people the president believes were targeted for political reasons. This comes amid hundreds of requests made directly to the White House, and tens of thousands currently waiting for review by the Justice Department.

First-time nonviolent drug offender Alice Johnson and former boxer Duke Tanner - who had their prison sentences commuted by Trump earlier in his term - were also at the White House asking for additional pardons, according to Tanner on social media.

He was sentenced to LIFE in prison for a FIRST time, NON VIOLENT crime because of Joe Biden’s crime bill

Good luck with your SECOND CHANCE

​Johnson received her pardon in 2018 at the request of celebrity Kim Kardashian-West. However, Kardashian-West was not abkle to swing a pardon for Brandon Bernard, a federal death row inmate.

Trump has prioritised those close to him, including a former national security adviser, Michael Flynn, who was convicted of making "false and fraudulent statements" to the FBI, and who received a Trump pardon last month.

According to CNN, Allen Weisselberg, the chief financial officer of the Trump Organization, currently under observation by investigators for his alleged involvement in bribery, is also being considered for clemency.

Officials noted earlier this week that a preemptive pardon for Trump himself is under consideration.

Among those publicly seeking a Trump pardon is George Papadopoulos, the first person to be sent down for his alleged involvement in the so-called "Russiagate" scandal.

"I was set up to become some sort of patsy in this conspiracy, which I believe was designed for two reasons: one was to initially cover up that I was being spied on for other reasons and two, to then use me and frame me to eventually undermine the Trump presidency and use me as some sort of conspiracy person that connects all the dots that never existed in the first place", Papadopoulos said in April 2019.

Another official seeking a pardon is Paul Manafort, who in 2018 was convicted of not disclosing foreign bank accounts or registering as a foreign lobbyist on behalf of the government of a former Ukrainian president, Viktor Yanukovich.

Just days before former Trump advisor Roger Stone was set to report to federal prison, the president in July commuted the lobbyist's sentence for his numerous offences.

Trump rewarding Roger Stone for his silence by commuting his sentence makes me think about this:

Sen. Leahy: “Do you believe a president could lawfully issue a pardon in exchange for the recipient’s promise to not incriminate him?”

​This comes amid unsubstantiated reports that Trump could pardon detained whistleblower Julian Assange before he leaves the White House in January.

Trump would not be the first president to use executive clemency powers for his inner circle, however. Perhaps most controversially, Gerald R. Ford pardoned his predecessor, Richard M. Nixon, for his involvement in the Watergate scandal.