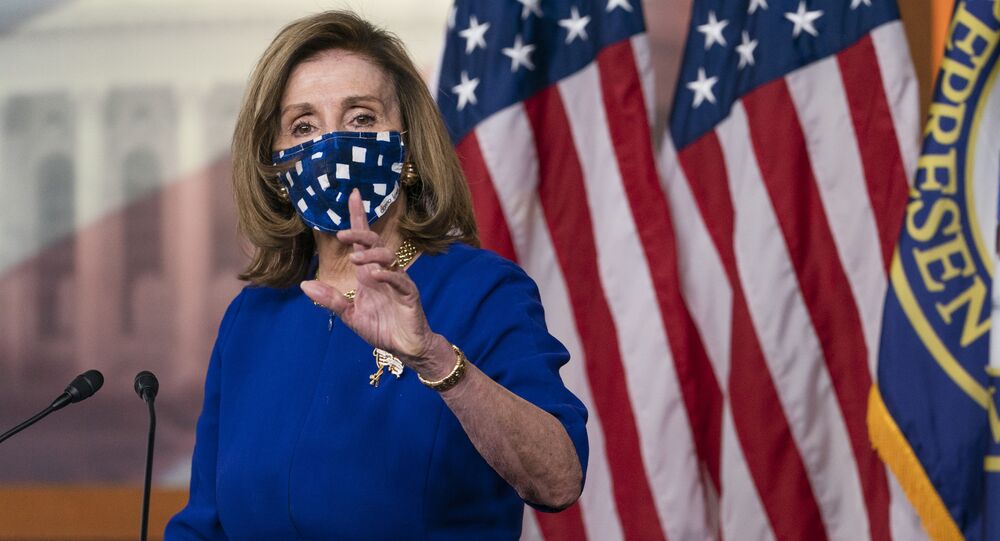 California Democratic Representative Eric Swalwell, 40, is currently under a media whirl following a recent investigation by journalists claiming that he had a relationship with an alleged Chinese spy five years ago. Swalwell has denied any wrongdoing and US Speaker of the House Nancy Pelosi has reportedly backed his presence on the committee.

A group of 17 Republicans in the US Congress sent a letter to US Speaker of the House Nancy Pelosi, asking her to "immediately remove" Swalwell from the House Permanent Select Committee on Intelligence, in light of a recent report by journalists that he was "among the most significant targets" of a Chinese-born, then-California student, said to be a spy, Fox News reported Tuesday.

The media outlet that conducted its own investigation, revealed that a Chinese national, Fang Fang, aka Christine Fang, used to work for Beijing intelligence during her residence in the US, collecting information useful for influencing rising US politicians.

“Because of Rep. Swalwell's position on the House Permanent Select Committee on Intelligence, his close interactions with Chinese intelligence services, however unintentional they may be, are an unacceptable national security risk,” the letter reads.

Lawmakers stated that the committee "handles some of the most sensitive information our government possesses—information critical to our national defense", urging Pelosi "to immediately remove Rep. Swalwell from his position on the House Intelligence Committee."

Among those who signed the letter were Minority Whip Steve Scalise, and Representatives Jim Banks, Chip Roy, Liz Cheney and Paul Gosar.

The #CCP will do anything to gain access, power, and control.

Given Rep. Swalwell's ties to a Chinese spy, reported by @Axios last week, he is no longer fit to serve on the House Intelligence Committee.

For the sake of our national security, he should step down immediately. 👇 pic.twitter.com/axlMTvlrJC

The GOP House members noted that in 2017, Pelosi called ex-Attorney General Jeff Sessions "not fit to serve" and urged him to resign, amid reports at the time that he failed to disclose to Congress details of meetings with then-Russian ambassador, Sergey Kislyak.

"Rep. Swalwell withheld information for five years from the House Intelligence Committee about an ongoing Chinese espionage operation targeted at him and his own colleagues," stated the letter. "Obviously, Rep. Swalwell's interactions with a Chinese spy were more dangerous and unusual than AG Session’s meetings with a Russian diplomat."

Republicans in Congress argued that, in 2019, during the so-called Trump-Russia investigation, Swalwell used his position on the intel committee to attack "President Donald Trump’s unproven ties to Russia" while refusing to explain his own ties to an alleged Beijing spy.

Fox News reported that GOP House Minority Leader Kevin McCarthy did not sign the letter, but called for the Democrat Representative's resignation from the committee.

On Monday, Republican Representative Dan Crenshaw, who is not among the signers, ripped mainstream US media for what he described as its lack of attention to the story, calling it "infuriating, corrupt, and disgusting", slamming media and Swalwell's fellow party members for having "no interest in asking questions".

Earlier, Republican Senator Rick Scott sent a letter to Pelosi of the same nature, stating that, given the information provided by the report, Swalwell had "no place on the House Intelligence Committee".

"Representative Swalwell sits on the House Intelligence Committee, where he has access to our nation’s most sensitive information. He has spent years spreading Russian disinformation in an effort to take down the president, all the while being used as a pawn by the Chinese Communist Party", Scott wrote.

An Axios story on the alleged Swalwell-Chinese acquaintance is a report on an investigation that took "more than a year" to conduct, uncovering Fang's activities in 2011-2015. Believed to be Chinese spy, Fang's purported aim was to befriend local US politicians to gather information that might come in handy when those politicians became federal policy makers, especially in the foreign sphere.

According to that report, Fang was not suspected of accessing any classified information, although she was for a time placed under an FBI probe and surveillance, and soon left the country.

In a statement following publication of the allegations, Swalwell denied any wrongdoing, stating that the FBI gave him a comprehensive briefing on Fang causing him to immediately cut all ties to her.