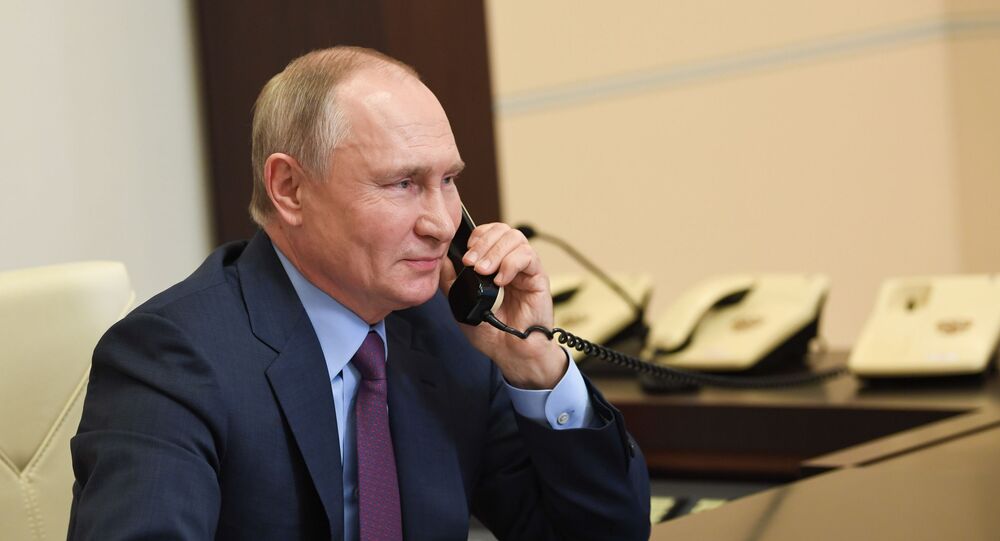 On 14 December, the Electoral College gathered across the US states to cast 302 electoral votes for Joe Biden, effectively confirming his victory in the November presidential election.

Russian President Vladimir Putin has sent a letter of congratulations to Joe Biden following the latter's victory in the US presidential election, the Kremlin has said in a statement.

"In a telegram, Putin wished the President-elect every success and expressed confidence that Russia and the United States, which bear special responsibility for global security and stability, can really contribute to solving many problems and challenges that the world now faces despite their differences," the statement reads.

Putin also said in his message that Moscow was ready for collaboration and contacts with Biden administration, adding that "mutual respect-based cooperation" between the two countries "would serve the interests" not only of the US and Russia, but the whole world.

Democratic candidate Joe Biden was projected to win the US presidential election shortly after the 3 November, however, the incumbent president Donald Trump has challenged the results of the vote, citing claims of ballot tampering and illegal vote counting. The counting and certification of the vote was also delayed in some key battleground states across the country, including Georgia and Pennsylvania, due to mail-in voting rules, with the Trump campaign eventually filing numerous lawsuits to protest the projected results of the election.

However, President Trump said in the end of November that he would "certainly concede" to Joe Biden if Electoral College voters acknowledge his victory during their meeting on 14 December.

Many, however, did not want to be hasty with their congratulations until the election results were formally certified and confirmed by American electors.

Speaking to Russian media in the end of November, President Putin revealed that he had not congratulated Joe Biden by that time because there were some "formalities" based on "established practices and legal standards" that needed to be followed before the Democrat's win was confirmed.

"There is no ulterior motive or anything that could serve to further degrade our relationship. It is a purely formal approach," Putin said.

The Russian president stressed that this delay was not based on on his like or dislike for future US president, but rather on a wait-and-see approach, as he was anticipating the end of the "political confrontation" in the country following the presidential vote.

"We will work with any person, who holds the trust of the US people," Putin underlined back then. "But to whom this confidence is given — it must either be indicated through political convention when one of the parties recognizes the victory of the other, or the final results of the election should be summed up in a legitimate, legal way."

On Monday, American electors convened in the country's legislative bodies to confirm Joe Biden's election victory, casting 302 electoral votes in his favour in comparison to the 232 assigned to Donald Trump. No “faithless” votes were recorded during the procedure, meaning that electors have reflected results of the popular vote in their states, as was projected by US media.

The incumbent President Trump has so far refused to concede defeat.