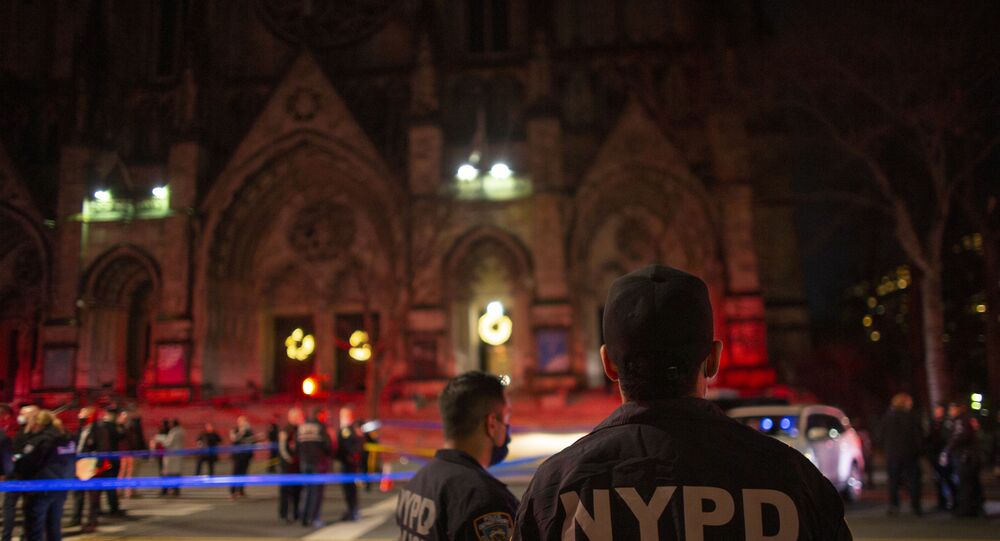 NEW YORK (Sputnik) - No civilians appear to have been injured in the shooting in front of the Cathedral of St. John the Divine in New York City, Police Commissioner Dermot Shea told reporters.

According to the commissioner, the shooting started at 03:45 p.m. local time (20:45 GMT) on Sunday, on the steps in front of the Cathedral of St. John the Divine after an annual holiday event.

"At about 3:45 pm the caroling came to a close. It was at about that time, at 3:45 pm when shots rang out from an individual, if you look behind me, right in front of those massive stone doors, an individual firing shots," Shea explained during the Sunday press conference broadcast on Twitter.

​The commissioner said that "the music had stopped playing, nobody was playing instruments, but there were people in the immediate area lingering around" and those people started hiding behind cathedral poles near the entrance when the shooting began.

© AFP 2020 / ELEONORE SENS
Live Updates: Gunman Shot by Police After Opening Fire at Manhattan Church
"It is by the grace of God today that we don’t have anyone struck," Shea added.

Earlier, an NYPD spokesperson told Sputnik that the shooter was deceased and that several police officers were delivered to city hospitals for medical evaluation after the shooting.

"We have a total of 15 shots fired by our three members of the service, this is preliminary at this time, we have multiple shots fired by the defendant. The defendant at this point was struck at least once in the head and deceased, he was removed to the hospital around the corner," Shea told reporters.

According to the police chief, the motive behind the shooting is unknown at this time, but police have a "tentative idea" and are now following up leads.

"We have two firearms recovered," Shea said, adding that they were semi-automatic firearms. "Also recovered is a bag that we believe belonged to the defendant. Inside this bag was a full can of gasoline, rope, wire, multiple knives, a Bible."

According to the commissioner, the suspect had a criminal history.

"Multiple witnesses are telling our detectives that he [shooter] was yelling ‘Kill me!’" Shea told reporters.

A cathedral guard told Sputnik earlier on Sunday that the situation was back to normal and calm when he started his shift about one hour after the shooting, at 5 pm local time.