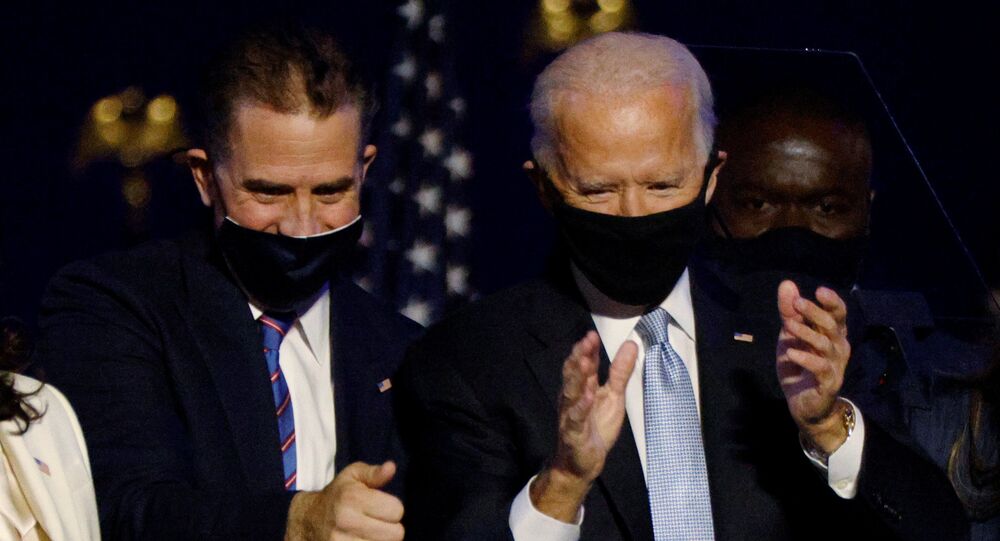 A probe has been recently opened into Hunter Biden's tax affairs, with media reports suggesting that investigators were particularly interested in his dealings with Chinese business partners.

Hunter Biden requested to provide the "keys" for his father, Joe Biden, and Chinese businessman Gongwen Dong, the Daily Caller reported on Saturday, providing an alleged screenshot of the correspondence.

The email was allegedly sent to Cecilia Browning, the manager of the "House of Sweden" office building, on 27 September 2017. According to the screenshot, he also requested that his office's door sign read "The Biden Foundation" and "Hudson West".

"Please have keys made available for new office mates", Hunter Biden reportedly wrote in the email, listing the elder Biden and his wife Jill Biden, his uncle Jim Biden, and Gongwen, who he called "Chairman Ye CEFC emissary".

Ye is apparently a reference to Ye Jianming, the founder of the Chinese energy company CEFC.

Another screenshot provided by the newspaper showed that Cecilia Browning replied to Biden's message saying she was "very excited and honoured to welcome [his] new colleagues!"

Hunter Biden's dealings in China, especially his connections to CEFC officials, have fueled concerns in the US that his business partners could be connected to the Chinese Communist Party. President Donald Trump has repeatedly called on the authorities to investigate the Bidens' dealings overseas, accusing the media of bias for not covering the corruption allegations against the former vice president and his son.

In particular, Trump has accused Hunter Biden of using his father's connections in the course of lobbying activities, while the elder Biden allegedly received "kickbacks" from the transactions.

In mid-October, the New York Post published an article containing two e-mails allegedly retrieved from Hunter Biden's laptop indicating that he had arranged meetings with foreign officials for his father when the latter served in the Obama Administration.