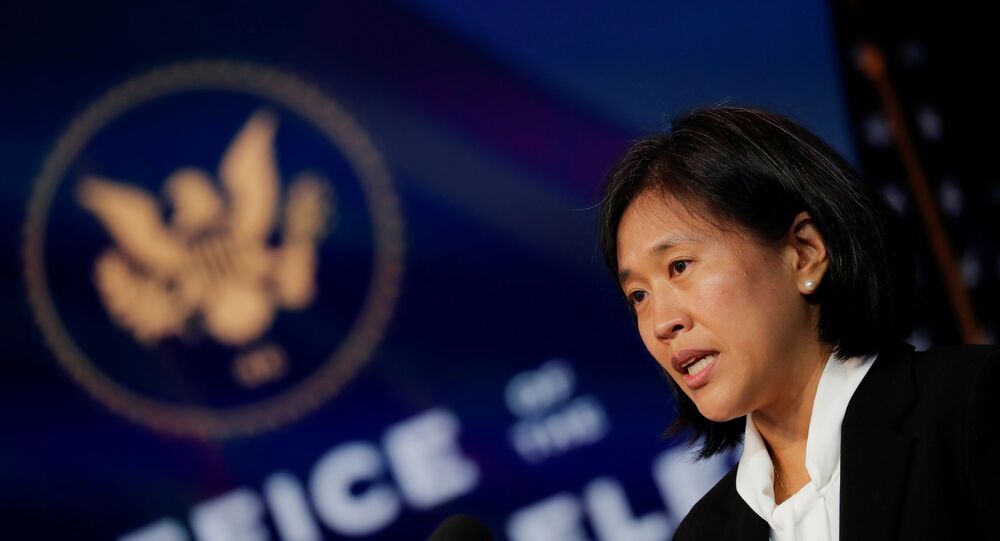 WASHINGTON (Sputnik) - President-elect Joe Biden said commerce with China will be a top priority for his administration and his newly unveiled pick to lead the Office of the US Trade Representative (USTR).

Biden made the comments upon announcing new cabinet appointments on Friday, including Katherine Tai to be US Trade Representative. Tai, a Taiwanese American lawyer, played a leading role during the Obama administration in trade disputes including targeting China.

"During the Obama-Biden administration she [Tai] was a chief enforcer against unfair trade practices by China which will be a key priority in the Biden-Harris administration," Biden said.

He also has stressed that she understands that the United States needs to be more strategic in its trade.

If confirmed, Tai would be the first Asian American and first woman of colour to serve as US Trade Representative, the Biden transition team said in a statement after Friday's event. During her previous work in the USTR she served as Chief Counsel for China Trade Enforcement. Tai is currently the chief trade lawyer for the US House Ways and Means Committee.

Earlier in December, the vice-president elect said his administration will pursue a trade policy that would actually lead to progress in tackling "China's abusive practices," such as theft of intellectual property, dumping of goods, illegal subsidies to corporations, and forced transfers of technologies from US companies to their Chinese counterparts. He also claimed that he was not planning to remove 25 percent tariffs on $250 billion worth of Chinese imports, imposed by Trump, immediately after entering the White House.

Chinese Foreign Minister Wang Yi said on Monday that Beijing is ready to maintain a dialogue with the United States on strategic and long-term issues, adding that the countries should boost negotiations at various levels.

Relations between the United States and China have been strained since 2017, when Washington updated its National Security Strategy to portray China as a major threat to US interests and President Donald Trump launching a trade. Beijing has repeatedly denied all US allegations of unfair trade practices.