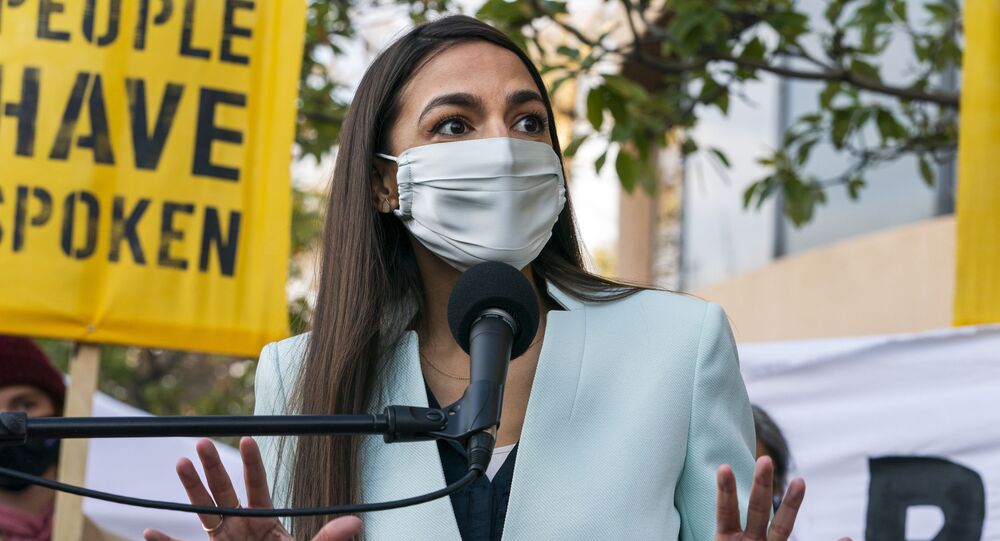 US Rep. Alexandria Ocasio-Cortez (D-NY) joined the US Congress at the start of the 2019 session and has been adamant about pushing improvements to the US’ criminal justice, gun control and health care policies, among others; however, her stances have largely been met with opposition, with critics often disregarding her initiatives.

Ocasio-Cortez held a Instagram Live Q&A session late Thursday in a bid to provide viewers with an update on the state of Congress’ COVID-19 relief bill negotiations, but also used much of the livestream to slam critics who have repeatedly characterized her as a “radical.”

The congresswoman initially began the livestream by zeroing in on US Senate Majority Leader Mitch McConnell (R-KY) over his opposition to providing Americans with stimulus checks similar to those dispersed earlier this year.

“Mitch McConnell does not want to cut a check,” she stressed, highlighting that negotiations have buckled as many Republican lawmakers - who are being led by McConnell - are instead demanding a slimmed-down aid package that also includes a liability shield to protect corporations from COVID-19-related lawsuits for a period of five years in exchange for $1,200 stimulus checks for struggling Americans.

“Why do you need to get something for helping your constituents?” Ocasio-Cortez questioned. “Why do we need to exchange people’s well-being and ability to survive for yet another corporate bailout?”

However, within a few moments, the New York lawmaker quickly turned her attention to calling out critics who have labeled her as a “radical” for simply advocating for a livable minimum wage and wanting to pass an aid package without strings attached.

“The fact of the matter is I recognize we need help, you all need help, and I will do whatever it takes in order to make sure that you all get the help you need - get the money that you need, but also aren't sent in and made so vulnerable at your job that you get COVID and then have no recourse against your employer,” she remarked.

"Shout out to my fellow radicals in the United States who believe crazy things like a full-time job should be enough for you to live and believe in crazy radical things like if you kill someone, there shouldn't be impunity,” she continued.

Offering a lesson to her viewers, Ocasio-Cortez noted that if one were to simply refresh their knowledge of American history, they’d realize that there was more "radicalism in the United States as recently as the '60s.”

Ocasio-Cortez has often faced backlash and disapproval from congressional colleagues on both sides of the aisle, as some believe her political views and initiatives to improve living standards in the Land of the Free alienate some politicians and voters.

Most recently, the lawmaker found herself at odds with Sen. Mike Lee (R-UT) after he blocked two proposals that would establish new Smithsonian museums highlighting American Latino and women’s history.

Close but no Cigar: AOC Slams Dems for Not Doing Enough to Woo Cuban Voters

AOC Ridiculed as Her Campaign Store Starts Selling 'Tax the Rich' Sweatshirt... for $58