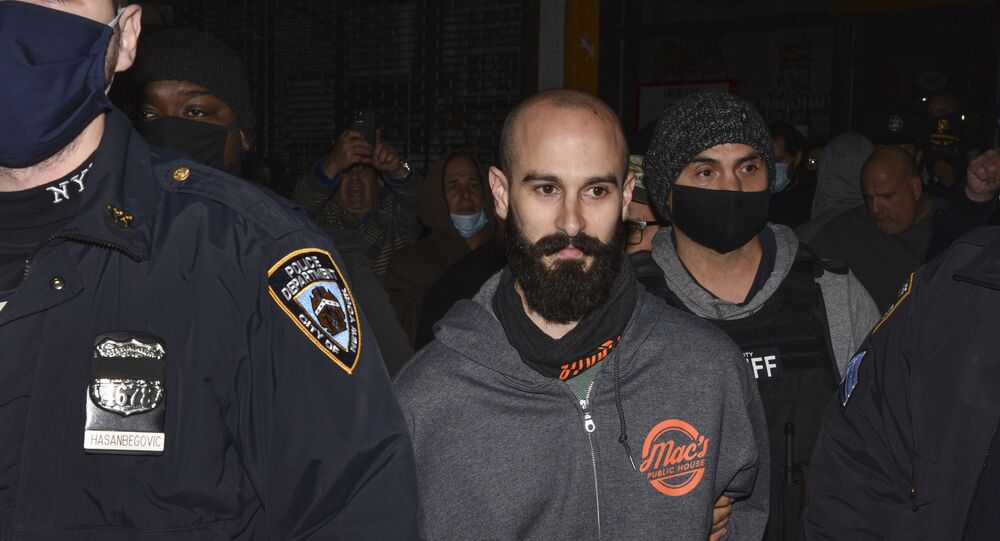 A standoff between the owners of Staten Island's Mac's Public House and New York City authorities is gaining steam. US investigative journalist Jason Goodman has explained the origins of the row and how the mainstream media and the local government are hurting the needs of US small businesses amid the pandemic.

Danny Presti, a 34-year old general manager and co-owner of Staten Island bar Mac's Public House, has found himself in the crosshairs of New York City Mayor Bill de Blasio and New York Gov. Andrew Cuomo who condemned him for not adhering to the city's COVID-19 rules and allegedly hitting a sheriff's deputy with a car.

"How dare you?", Cuomo told a press briefing on Monday. "What kind of signal are you sending? It's repugnant to the values of any real New Yorker".

Things turned ugly for the businessman after he questioned the rationale behind the authorities' decision to split the smallest of New York City's five boroughs into two different zones with restrictions being placed on his bar while a block away indoor dining is still allowed. On 20 November, Presti and his business partner declared Mac's Public House an "autonomous zone" and pledged to stay open.

"Every day small businesses are living in fear, not just of this virus, but that our governments will take our livelihoods away, even as we're being safe", Mac's Public House wrote on Facebook. "Just to clarify, we acknowledge this virus as a real threat and are still taking necessary precautions. What we do not acknowledge is that our government has the right to shut us down when we're operating in a safe manner".

Some Autonomous Zones are More Equal Than Others

Although the city's authorities gave a green light to the "City Hall Autonomous Zone" run by Black Lives Matter supporters despite the pandemic spike last summer, Mac's was immediately subjected to scrutiny by NYC Sheriffs and fined thousands of dollars. However, this pressure was met with resistance from borough dwellers, other New Yorkers, and citizens from neighbouring states who kicked off rallies in support of Presti and other small business owners hurt by the city's COVID restrictions.

The Staten Island protesters are questioning the "orange zone" rules, the formulas behind them, and the accuracy of the COVID testing, explains US investigative journalist and Crowdsource the Truth founder Jason Goodman, who's done several podcasts at Mac's over the last two weeks. To complicate matters further, it appears that the governor and the mayor have adopted a double standard to different categories of New Yorkers, according to the journalist.

Goodman recalls that in June when he was shooting his video "Greetings from CHAZ NYC" outside Mayor de Blasio's office in Lower Manhattan, he saw thousands of people in City Hall Park, with masks down and masks off, who organised a party there while NYPD officers stood around watching the place.

What struck the investigative journalist was the scale of anti-hygenic behaviour and little if any protection amid the swirling pandemic.

"There were a lot of people; some of them look like they were homeless, they've got blankets set up and were packed there like it was a concert or a festival or something like that", Goodman says. "They were giving away food. These weren't restaurants which are regulated by the Department of Health, we don't know who had prepared this food, and we don't know what was in it. People were walking around with open plates of food, eating among each other and defecating in the park".

It raises questions as to why this sort of event was absolutely okay with Cuomo and de Blasio, while Mac's Public House, which observed the necessary COVID protections, has triggered ire from the city's authorities, the journalist wonders.

© REUTERS / JEENAH MOON
New York police officers stand guard outside of the Mac's Public House after closed it down amid the coronavirus disease (COVID-19) pandemic in the Staten Island borough of New York City, U.S., December 2, 2020

That's just half the story, as two stores down from Mac's, on the very same block, there is a Chinese restaurant that is following the mayor's rules and has plastic tents outside where people can sit, Goodman continues.

"You can sit in the cold, inside a tent with no circulating air – essentially a virus incubator. That's encouraged by the mayor, you can do that. But you can't sit inside [at Mac's] with a heating, ventilation, and air conditioning (HVAC) system circulating and filtering the air", he notes.

​The orders from the governor and the mayor contain numerous logical and scientific contradictions. What people at Mac's Public House are doing is standing up to these purportedly illegal orders, the journalist elaborates, adding that these small businesses have little if any choice as they are not subsidised by the authorities. By shutting down these businesses, the governor and the mayor are actually depriving the people of the ability to earn their living, depriving them of money and food, he stresses.

"So, at what point do you push a man, even an honest one, to desperation? I think that the most honest man facing his own children starving might do things he himself finds reprehensible. I don't know what these things might be, but this is obvious, we are speaking about survival", Goodman notes.

'Staten Island is New York's Version of the Rest of America'

The Staten Island standoff has made news worldwide. On 2 December, over 2,000 people gathered outside the bar to hold a peaceful protest after Danny Presti was arrested for the first time for defying the coronavirus rules. One of the organisers of the demonstration, Staten Island artist and Trump supporter Scott Lobaido, has repeatedly called upon people to stand up for Mac's. Lobaido has organised several peaceful protests in accordance with the US Constitution and in stark contrast to Antifa/BLM protests seen across the US earlier this year, many of which resulted in violence, looting, arson and even death, the journalist notes.

"I did not see violence in Staten Island", says Goodman who was covering the peaceful protest. "Because, unlike what the media wants to portray these protesters as, they are humble people who know their rights, they know right from wrong, and these are people who want to live their modest lives".

© REUTERS / JEENAH MOON
People protest outside of the Mac's Public House after closed it down amid the coronavirus disease (COVID-19) pandemic in the Staten Island borough of New York City, U.S., December 2, 2020

What's unfolding in Staten Island is symptomatic of what is going on throughout the city and the state in general as the mayor and the governor appear not to care about the "little guy" and the tension within the working and middle class is growing, according to the journalist. Unless the authorities lift strict coronavirus measures to allow people to work, the situation will continue to deteriorate until it explodes. "And it's going to leave a big mess", Goodman warns.

On 6 December, Danny Presti was arrested for a second time on ten charges including third-degree assault, reckless driving, menacing, and resisting arrest. NYC Sheriffs allege that Presti ran over one of their deputies breaking both his legs. Presti's attorney, Lou Gelormino, rejected the claim as an "outright lie" adding that one of the deputies had "injured his ankle". The New York Post, however, stated that the officer did suffer fractures to both legs, citing City Sheriff Joseph Fucito.

According to Presti's account of events, two individuals approached him in the dark two blocks away from his building, yelled at him and started running at him. The 34-year old ran away in fear of his life, per his lawyer. The deputies, for their part, argue that they identified themselves.

If anyone was at the protests at #MacsPublicHouse & would like to file a complaint regarding inappropriate conduct by @NYCSHERIFF's officers here is the link https://t.co/8cwTJojVb3

​The video evidence shows two plainclothes men dressed in black charging at Presti as he flees to his vehicle. The bar co-owner was released from police custody on his own recognizance the same day he was arrested.

However, on 9 December Governor Cuomo told a press conference that Presti ran "into a uniformed police officer" and abused a "NYPD uniformed law enforcement" agent, which was actually not true, Goodman underscores. "I called Presti's attorney Lou Gelormino and he confirmed the individuals involved in the altercation were plainclothes NYC Sheriffs who did not identify themselves as law enforcement", the investigative journalist emphasises.

"[Cuomo] also makes false claims about the protests at Mac's Pub somehow having a statistically significant impact on the death rate in New York City", he notes. "That is medical absurdity, even if everyone at the big protest got infected, it hasn't been enough time for anyone to get sick yet.  He accuses 'this movement' on Staten Island of being directly linked to increased deaths".

Presti's lawyers have so far denied the accusations, blasting the authorities for staging a "political ambush". At a news conference on Monday, supporters of Mac's managers stated that the governor and mayor were trying to "crush the little man who dares to speak up" in a bid to shield his business and support others.