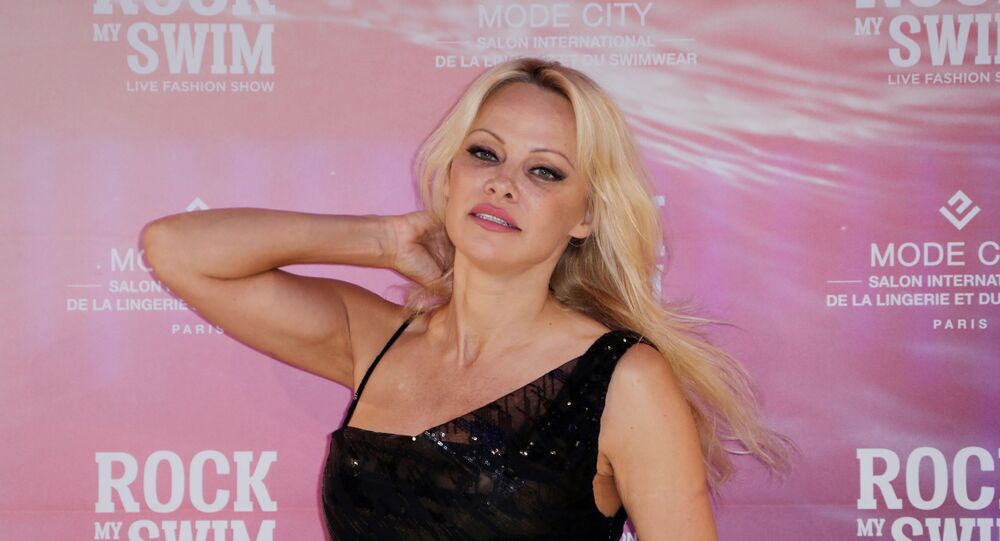 Iconic US TV star Pamela Anderson has previously made numerous appeals to authorities to release Wikileaks founder Julian Assange during his asylum in the Ecuadorian embassy in London and since his incarceration in the United Kingdom.

Former actress and model Pamela Anderson has urged Donald Trump to pardon Wikileaks founder Julian Assange, posting a photo of herself in a scanty bikini on Twitter to get the attention of the sitting President.

​In another image, the whistleblower’s longtime friend is wearing what looks like a satin, long-sleeved wrap dress, holding a sign that reads, “I am Julian Assange”.

The ex-Baywatch star, 53, also tweeted the link to an online event launching a book of portraits of Assange supporters around the world on Monday.

​The book, part of the Courage Foundation’s #WeAreMillions arts project, seeks to demonstrate global support for Assange, who was charged with conspiracy in trying to access a classified US government computer with former Army intelligence analyst Chelsea Manning in 2010.

The Twitter posts by Pamela Anderson follow a Thanksgiving call addressed to Trump to pardon Assange from Stella Morris, the whistleblower’s girlfriend and mother of their two sons.

​Morris had posted a picture of herself with the two children, tweeting that they “needed their Father”. The move came after Trump had pardoned former national security advisor Michael Flynn.

There has not yet been any official comment from Donald Trump on Anderson’s request.

Pamela Anderson, who has been photographed visiting Assange multiple times during his seven-year stint at the Ecuadorian Embassy, previously made numerous appeals to authorities to release Julian Assange, who has been in Belmarsh high-security prison in London, UK, for 19 months, fighting extradition to the US.

The former Baywatch star was also Julian Assange’s first visitor since he was sent to Belmarsh prison in southeast London, other than one of his lawyers, arriving wrapped in a grey blanket emblazoned with words including “free speech”.

“To see him be crucified like this is difficult for me because I know him as such a mild-mannered, sweet man and he's doing the best he can… I hope that President Trump will pardon Julian Assange. That's my wish."

Anderson had made the statements before the 2020 presidential election, which has now been projected my most US media outlets to have been won by Donald Trump’s Democratic opponent Joe Biden. Trump has not yet conceded victory, decrying massive election “fraud” and launching legal battles in court to overturn the results.

The end of any administration typically prompts a wave of pardons.

On 25 November President Trump pardoned his former national security adviser Michael T. Flynn, who had twice pleaded guilty to lying to the FBI about the content of his conversations with the then-Russian envoy to the US in 2016.

The White House has since referred to the pardon as one for "an innocent man".

Wikileaks founder Julian Assange was indicted by a federal district court in Virginia in 2019 on 17 counts of violating the 1917 Espionage Act by “unlawfully obtaining and disclosing classified documents related to the national defence,” as well as for conspiring to hack into a Pentagon computer network.

If the UK court were to approve his extradition and the whistleblower was found guilty, he could be sentenced to as much as 175 years in a maximum-security prison.

At the end of an extradition hearing in autumn at a court in London's Old Bailey, District Judge Vanessa Baraitser had said she would deliver her decision at on 4 January. The judge previously denied Assange bail over fears he was a flight risk.

Assange jumped bail in 2012 when he sought asylum at the Ecuadorian Embassy in London. The whistleblower ended up staying at the embassy for seven years, until he was evicted and subsequently arrested. He has been in a London prison since April 2019.