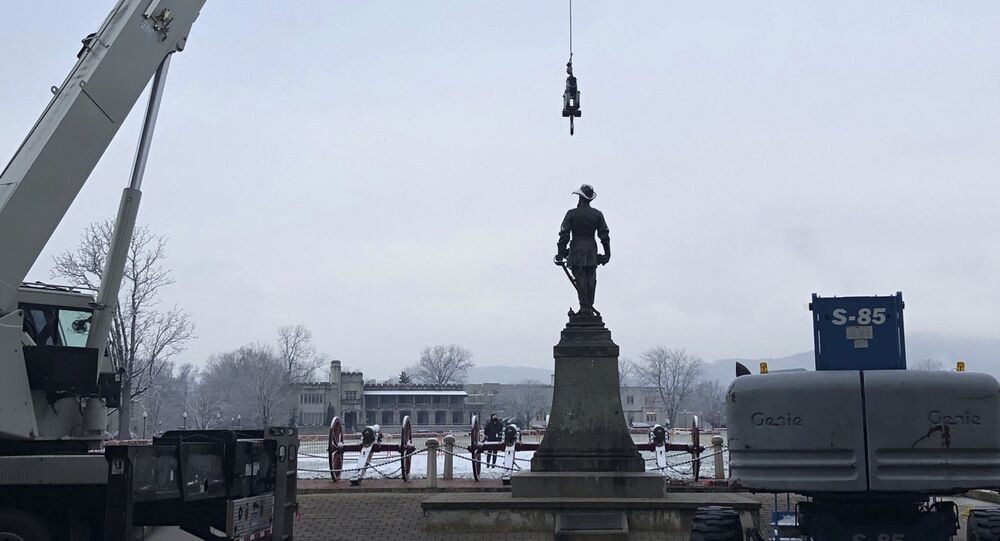 Board members of the Virginia Military Institute (VMI) approved the removal in October, shortly after a story published in the Washington Post argued Black cadets "still endure relentless racism" at the military college.

A modest crowd formed near the cadet battery as the controversial bronze statue began its $209,000 relocation to the Virginia Museum of the Civil War and New Market Battlefield State Historical Park in nearby New Market, Virginia, according to WDBJ7. The costly move is reportedly being funded by the school's facility maintenance and operations account.

The Board of Visitors at VMI, the oldest state-supported military college in the US, announced in late October that the statue celebrating Jackson would be leaving the campus - nearly 110 years after it was unveiled by sculptor Moses Ezekiel.

Ezekiel was a veteran of the Battle of New Market before making history as VMI's first Jewish cadet.

“VMI, like all aspects of society, must honestly address historical inequities and be intentional about creating a better future. We care deeply about the individual experiences of all of our cadets and alumni,” said Board of Visitors President John William "Bill" Boland in a statement obtained by the Associated Press.

The decision has been viewed as a direct response to a Washington Post article by Ian Shapira that slammed the school's problematic praise of Jackson. Citing VMI alumnus Kaleb Tucker, who is Black, the article revealed that first-year cadets have traditionally been forced to salute the statue of the Confederate general.

Shapira emphasized that Jackson was more than just a professor at the military college - he was also an "enslaver of six people."

“They were asking us to commemorate people on the wrong side of history and to celebrate people who wanted African Americans in bondage, raped and enslaved,” argued VMI alumna Carroll Foy, who is also Black.

Allegations raised in the publication triggered a $1 million probe backed by the Virginia General Assembly.

The Washington Post's reporting on the matter also led to the resignation of VMI's superintendent, retired US Army Gen. J.H. Binford Peay III, who proclaimed in a July memo that the school had no intention of renaming any buildings or removing any statues from the campus.

"Throughout the years, the primary focus on honoring VMI’s history has been to celebrate principles of honor, integrity, character, courage, service, and selflessness of those associated with the institute. It is not to in anyway condone racism, much less slavery," he wrote.

Anti-racist protests ignited earlier this year following the May 25 police slaying of George Floyd, an unarmed Black resident of Minneapolis, Minnesota. Local governments and entities, such as VMI, have responded to these calls for racial equality via their own symbolic denunciations of slavery and the Confederate States of America, which fought to maintain the enslavement of Africans.

A statue of former US President Thomas Jefferson, for example, was toppled by demonstrators in Portland, Oregon. Historians have documented that Jefferson was responsible for the enslavement of hundreds of individuals, including Sally Hemings, an enslaved, mixed-race woman who was raped by Jefferson and also gave birth to their child.

"Slave owner" and "George Floyd" were seen tagged on the statue's acropodium.