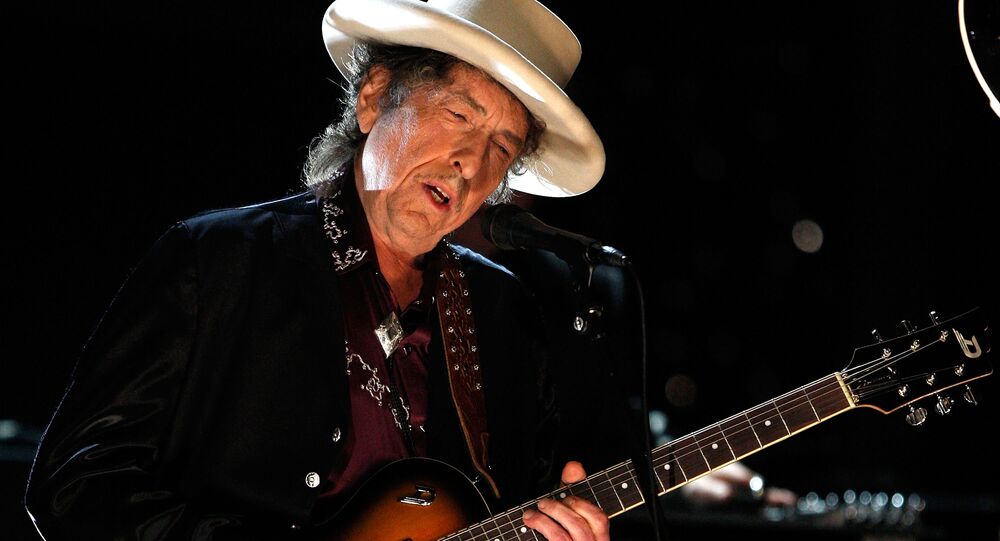 In November, a precious pile of the musician’s documents was auctioned in Boston for a six-figure sum, an event that was extensively covered by world channels. Some of them mistakenly reported that the transaction had happened posthumously.

American music legend Bob Dylan has sold rights to his entire songwriting catalogue to a publishing division of Universal Music Group, the corporation announced on Monday.

Universal Music Publishing Group (UMPG) will now buy the copyright to around 600 tracks, meaning it will collect all the present and future income from the songs’ licensing or replays. UMPG would also be the one to give permission to films, TV stations or other artists to use Dylan’s legacy.

This is expected to change nothing for the musician’s fans though, who would still be able to enjoy the familiar tunes of Just Like A Woman or Like a Rolling Stone on radio, CDs or streaming site.

The terms of the deal were not made public but it is estimated that Dylan’s gain from selling his catalogue varies between $200m and $450m. It is not expected that UMPG or Dylan himself would ever confirm these numbers.

The deal is still believed to be one of the biggest acquisitions in the history of UMPG’s head company Universal Music Group.

Announcing the deal, UMPG chairman and chief executive Jody Gerson said it was “both a privilege and a responsibility” to “represent the body of work of one of the greatest songwriters of all time - whose cultural importance can't be overstated.”

The news about the staggering acquisitions were met with a tinge of surprise on social media, with some questioning Dylan’s reasons for the move and expressing terror over the idea that his legacy could now be trivialised on TV.

Don’t EVER start a 7am news alert with “Bob Dylan...” I almost had a heart attack. pic.twitter.com/r1wayLSa6a

Look for Dylan songs to be used in commercials now.

Blowing in the Wind for Gas-X.
Lay Lady Lay for MyPillow
All Along the Watchtower for Jehovah's Witnesses
Where Are You Tonight for Google Maps
Rainy Day Women for Maybelline waterproof mascara

FINALLY! We'll get his songs back on Victoria's Secret commercials again!

Jesus, that had to be worth a fortune. I’m terrified to see what they do with it

Bob's music should be in the public domain ASAP. When could that happen? Since folk songs are central to his legacy, strange that this doesn't come up in the deal or reporting -- money doesn't talk, it swears.

Easier to split cash among heirs than copyrights. Spares the kids the hassle of running the biz & collecting royalties.

Just in November, a trove of documents belonging to the Academy Award-winning musician that featured some unpublished song lyrics was auctioned in Boston for $495,000. When reporting on the news, a number of world channels, including America’s MSNBC, mistakenly referred to the 79-year-old singer as dead. After an outcry from Dylan’s fans, they quickly moved to correct their grave lapse.