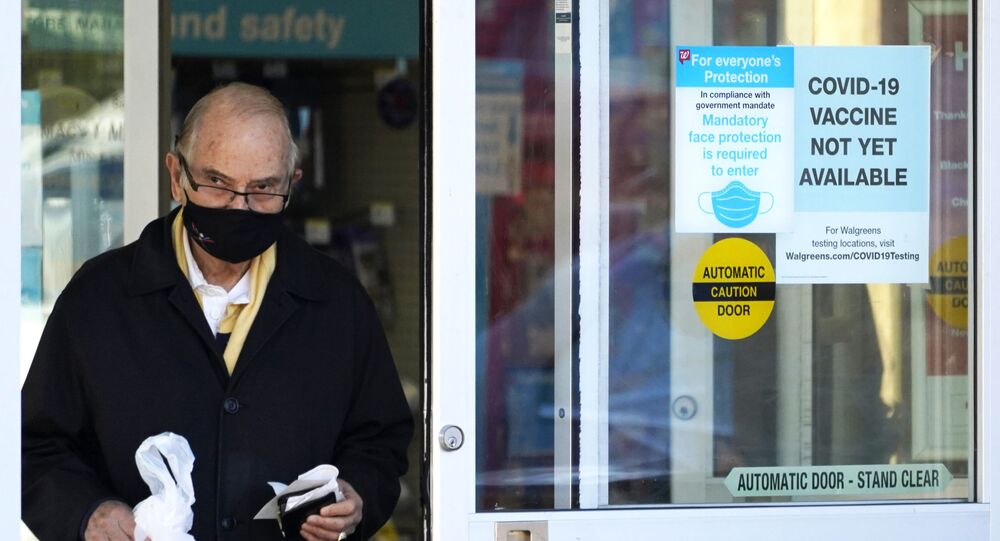 US to Feel Shortage of Vaccines, Despite Promises to Ship 300 Mln by January, Report Claims

In May, while announcing his administration's 'Operation Warp Speed', the US president, alongside one of the world's largest coronavirus vaccine developers, affirmed confidence in attaining a goal of producing 300 million or more vaccines by the end of the year.

The first batches of COVID-19 vaccines created under the US Operation Warp Speed, a cooperative effort between the Trump administration and private drug companies, are expected to be delivered by the end of the month. The amount of vaccines has been sharply cut to about 10% of what was promised, reportedly due to manufacturing problems, logistics bottlenecks and a lack of raw material supplies to laboratories, the Washington Post reported on Saturday.

The initial plans announced in May included not less than 300 million vaccine doses, while the current plan - after emergency-use approval - will before the end of this year see just 35-40 million. According to current projections, cited by the Washington Post, only up to 20 million people across the US will get the two-shot vaccine.

Under the Trump initiative, Operation Warp Speed included several drug companies racing to develop, test and produce a ready-to-use injection against the backdrop of the biggest pandemic in one 100 years, the Spanish Flu.

Over time, the government has sharply lowered its expectations on the amount of doses that will be available, reportedly saying that deliveries will be dispersed between states to ensure enough supplies for the second shot, as required by the Pfizer vaccine regimen, 21 days after the first shot.

According to the report, the sharply lower allocation numbers have caused confusion among state authorities, as they prepare for a lack of vaccine supply in the early stages of the vaccination campaign.

"I come from a family of seven siblings, and best practice was always to have seven of everything being given out," said Joe Sullivan, a senior health adviser in Oregon, a state expecting just 35,000 doses in the initial wave from Pfizer. “But we know that’s not possible in this case."

The vaccine supply is said to be accelerated in January-February of 2021, though it will not meet the amounts previously set by Trump in May. Paul Mango, deputy chief of staff for policy at the Department of Health and Human Services, has reportedly mentioned supply failures at one of the vaccine developing companies.

"There were a couple of our vaccine candidates that took significantly longer, in terms of failed batches, in terms of not having the purity we sought,” the Washington Post quotes Mango, who did not name the company which experienced batch failures. "We have cracked the code on these things but we’re two months behind on some of them."

The head of the Trump administration’s vaccine initiative, former GlaxoSmithKline pharmaceutical executive Moncef Slaoui, in the White House Rose Garden in May, said he was confident that “several hundred million” two-shot vaccines would be ready by the end of 2020.

Instead, Slaoui reportedly said recently that authorities are planning to ship only a small amount of vaccines before January, and they expect to not be able to fully immunize the population until the middle of 2021.

"If enough people are immunized, we should have this pandemic under control in the second half of 2021," he suggested recently.

According to data collated by the Johns Hopkins University, with a single-day record of 227,000 new cases, the total count of confirmed coronavirus infections in the United States has topped 14,712,272 cases. A minimum of 282,057 deaths have been registered since the pandemic outbreak at the beginning of the year, with over 5.4 million patients reportedly recovered from the disease.