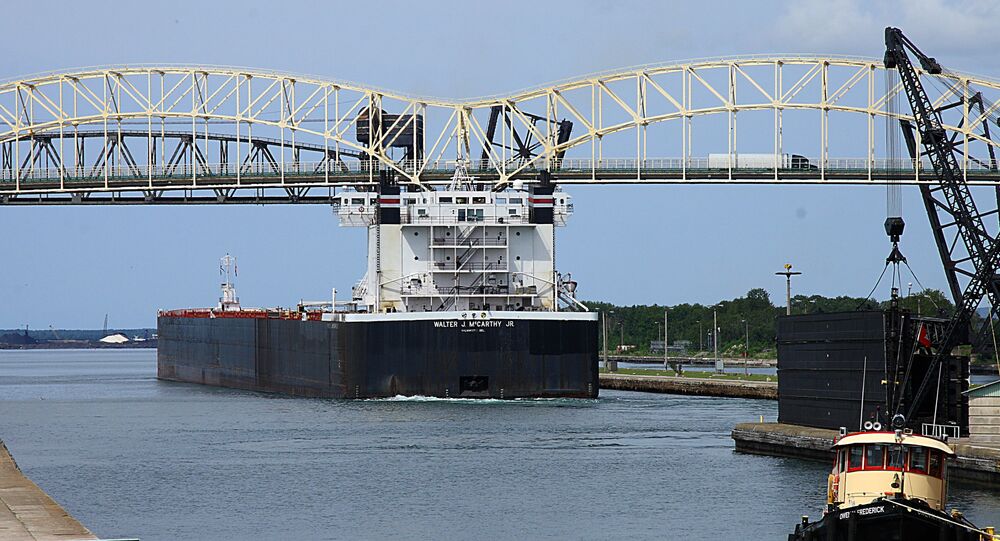 As Trump Edges Towards White House Exit, How Much Infrastructure Has He Given Green Lights To?

During the 2016 election campaign Donald Trump promised to spend US$1 trillion on renewing infrastructure in the United States. How far has he got and will Joe Biden pull the plug on those infrastructure projects?

Work began this summer on construction of a new US$922 million lock in the Great Lakes, the biggest single investment in US infrastructure under the Trump administration.

The Soo Locks enable large ships to navigate the St Mary’s River, between Lake Superior and Lake Huron, but at present only one ship at a time can pass through.

Eighty million tons of commercial commodities currently use the Soo Locks, including iron ore and coal heading to US steel mills from Duluth, Minnesota.

The new lock - the first since the Poe Canal was built in 1969 - will allow westbound ships to go into Lake Superior while eastbound ships pass in the other direction.

Infrastructure was a key campaign promise when Trump was elected but his plans hit a bump in the road in August 2016 when industry executives backed out of joining his Infrastructure Council in the wake of his refusal to condemn white supremacists after the clashes in Charlottesville, Virginia.

In December 2017 Kristina Swallow, the President of the American Society of Civil Engineers, told Sputnik there was an estimated $2 trillion gap over the next 10 years.

Much of the US's existing infrastructure was built between 1933 and 1970, a period which began with President Franklin D. Roosevelt's famous New Deal, which involved huge public investment in projects such as the Hoover Dam, the Lincoln Tunnel in New York and Los Angeles international airport,

Trump was not the first president to recognise the need to renew America’s infrastructure.

In December 2015 Barack Obama signed the Fixing America’s Surface Transportation (FAST) Act, which pumped US $305 billion into renewing US infrastructure.

In February 2018 the Trump administration presented a bolder infrastructure plan to Congress which proposed spending US$1.7 trillion, the majority of which would be from the private sector.

But the proposal got bogged down in Congress. In his 2019 State of the Union address Trump again raised the issue of infrastructure spending but did not go into any detail.

In November 2019, as he campaigned for the Democratic nomination, Joe Biden promised his own US$1.3 trillion infrastructure plans and said of the incumbent: “President Trump campaigned on repairing our nation’s crumbling infrastructure. But after countless ‘Infrastructure Weeks’ he has failed to deliver results. It has to change.”

The Biden campaign said the plan would be paid for through tax increases on corporations and wealthy individuals.

In June this year Reuters reported the Trump administration was preparing a US$1 trillion infrastructure package, which would include major spending on roads and bridges as well as 5G and rural broadband.

But, with the White House distracted by the COVID-19 crisis and the election campaign, nothing more was said by Trump or his entourage about infrastructure.

Instead the FAST Act was extended for one year by Congress in September 2020, hours before it was due to expire.

But while he has failed to push through one of his flagship policies he has given support to a handful of infrastructure projects.

In April 2018 Trump said during a visit to Michigan that he wanted to "fix" the lock problem between Lake Superior and Lake Huron.

​A few months later a report by the US Army Corps of Engineers backed the need for a new lock.

It raised the project’s cost-benefit rating from 0.73 to 2.42, enabling it to qualify for federal funding.

Work finally began on the project in May 2020.

The following month the Trump administration gave the go-ahead for a US$766 million rail bridge in New Jersey.

The new bridge will replace a 110-year-old structure over the Hackensack River.

He also approved plans for a new railway bridge in Laredo, Texas, which will boost oil exports to Mexico.

Biden is expected to try and push through his own infrastructure plan but he could be stymied in Congress by Republicans who are politically opposed to increases in tax on corporations and the wealthy.