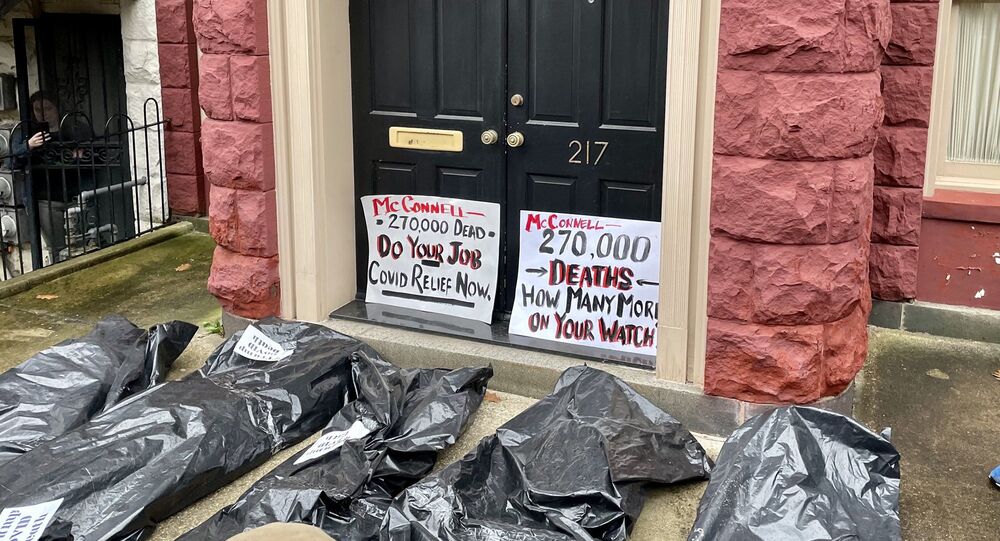 On Tuesday, members of activist group SPACEs In Action and Shut Down DC left dozens of fake "bodies" on the doorstep of several GOP Senators, as COVID-related deaths continue to spike throughout the nation.

Activists lined up black body bags in front of the residences of Republican Senators Mitch McConnell, Susan Collins, James Inhofe and Lindsey Graham. Most of the bags had notes saying "Trump COVID Death" symbolizing the more than 270,000 people who have died in the United States to date as a result of the ongoing global pandemic.

"Blood is on his hands, and this morning, we joined @ShutDown_DC to bring the bodies to his doorstep" the SPACEs In Action group tweeted, adding, "Today we brought the bodies to their doorsteps."

The tweet contained video and photos showing dozens of demonstrators piling "body bags" outside of McConnell's house in Washington DC.

🎥 Today we brought the bodies to their doorsteps. pic.twitter.com/40P7Fmv5l6

​Later, the Shut.Down.DC. group followed up with a tweet urging Republican Senators to "do their job". "This morning we sent a message to Senate leaders who are still blocking #COVID relief as more than 270,000 people have died", the activists noted.

This morning we sent a message to Senate leaders who are still blocking #COVID relief as more than 270,000 people have died.@senatemajldr McConnell and other senators have blood on their hands - we dropped off body bags at their doorsteps.

Amid Congress' failure to pass a second relief deal, a bipartisan group of US Senators announced a $908 billion coronavirus stimulus package plan that contains aid for states, expanded unemployment insurance and aid for small businesses, as well as for those with student loans.