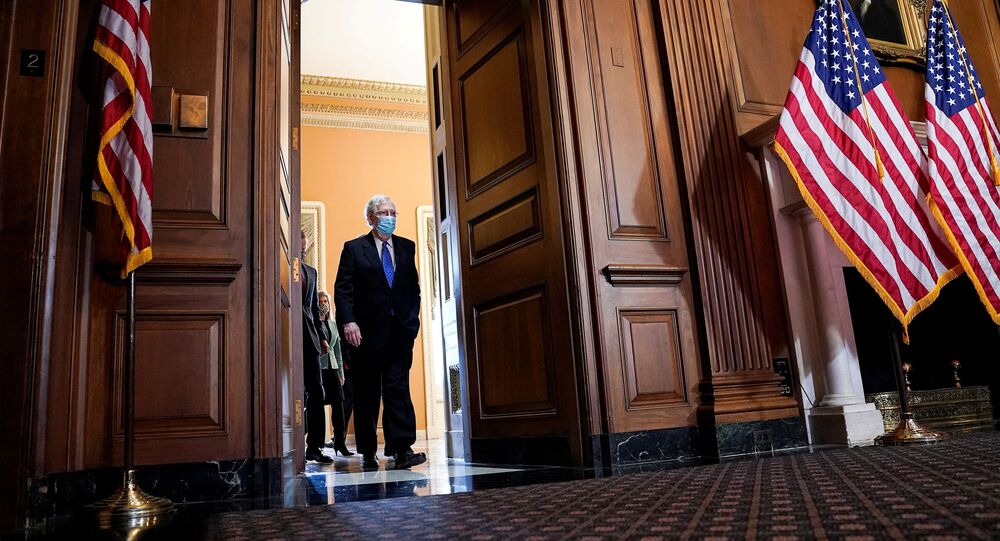 WASHINGTON (Sputnik) - Republicans in the US Senate on Tuesday called on fellow Democrats to adopt coronavirus relief measures they can agree on before the year ends.

"We just don’t have time to waste," Senate Majority Leader Mitch McConnell told reporters. "Deal with the things we can agree on now. And I think we all know that after the first of the year there is likely to be a discussion about some additional package of some size next year depending upon what the new administration wants to pursue."

GOP Senator John Thune, the majority whip, suggested during the briefing that funding for coronavirus vaccines and therapeutics, additional assistance for unemployment insurance and schools, money to replenish the Paycheck Protection Program of forgivable loans are all matters of bipartisan consensus.

"Those are all things that the Democrats say that they agree upon, but they have insisted - at least up until now - on a 'bloated' messaging bill on the order of $2.5 trillion... which is something that obviously wouldn’t pass the Senate and get signed into law by the president," he said.

"The question is what can we get through the House, 60 votes in the Senate and the presidential signature on. I would hope that in the course of the next couple of weeks as we are debating the year end issues that we can get some agreement on something that fits those basic parameters," Thune stated.

McConnell said he was in contact with Secretary of the Treasury Steven Mnuchin who has been "deputized" by President Donald Trump to indicate what he is willing to sign.

"I felt the first thing we needed to do was to find out what the president would in fact sign. We believe we have got an answer to that," McConnell said. "We are going to send that out to all the offices to get some feedback to see how our members react to a proposal that we can say for sure would be signed into law."

McConnell stated that he had received - "last night" - a letter on the matter from US Speaker of the House Nancy Pelosi, in the Democratic-held House of Representatives, and Chuck Schumer, the Senate minority leader. He did not, however, elaborate on the contents of the letter.