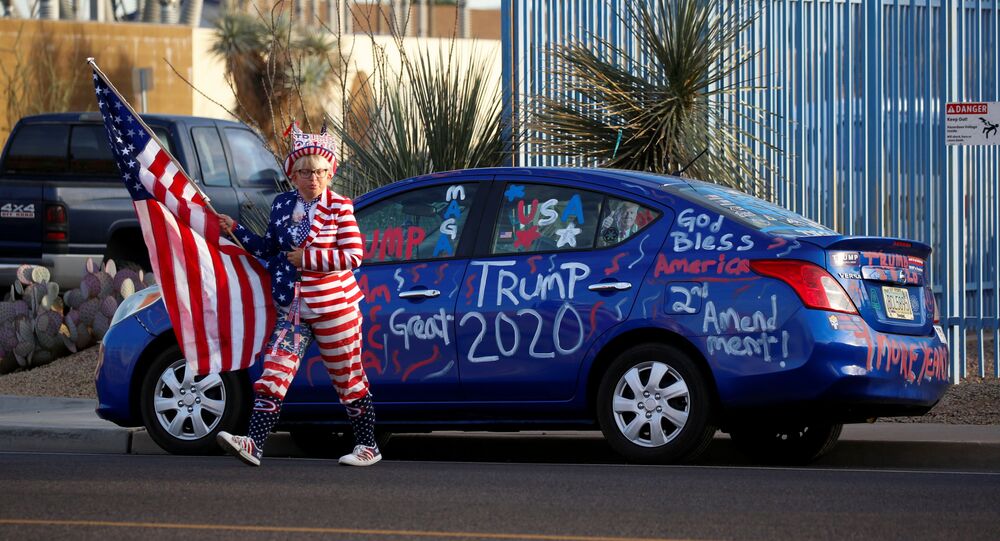 Witnesses for President Donald Trump's legal team told Arizona Republican state legislators on Monday that "truckloads" of ballots were brought into counting centres daily for more than a week after the November 3 election, while counters were told to ignore non-matching signatures on mail-in votes.

State House Representative Mark Finchem said on Monday he had seen enough evidence at the impromptu hearings he had chaired into allegations by President Donald Trump's campaign team of electoral fraud, and that the Republican majority in the state legislature should not appoint electors for Democratic candidate Joe Biden.

“We are clawing our electoral college votes back, we will not release them," Finchem said. "That’s what I’m calling our colleagues in both the House and the Senate to do, exercise our plenary authority under the U.S. Constitution.”

Arizona Senate majority whip Sonny Borelli and federal Congress Representative Paul Gosar stood by Finchem's side as he made the comments, raising speculation that he had the backing of Republican Party leaders in the state and nationally.

“There is a legal brief out there that says we are not tethered to state statue," Finchem insisted. "When it comes to this one question, a simple majority can call the House and Senate back, and in a day pass a resolution, and cause those electors to basically be held. And it is binding."

"I’ll see you all in court,” Finchem promised.

On Monday a witness told the hearings that "truckloads" of ballots kept arriving daily at the counting centre where she worked for over a week after the November 3 election, despite managers saying the count was almost finished. Another said she was told not to worry about postal ballots whose signature did not match those on file for that voter.

​​But that did not stop Republican state Governor Doug Ducey from endorsing election results certified by Arizona Secretary of State Katie Hobbs - who called Trump supporters "neo-Nazis". The final count gave Biden a lead of around 10,500 votes over Trump, a margin of 0.3 per cent.

Trump phoned in to the hearing, prompting boos when he attacked Ducey's "rush" to sign of on the results.

​Under the US constitution, each state has a number of votes ion the electoral college that chooses the next president, equal to their number of Congressional representatives and senators. Biden is currently projected to win 306 of the 538 electoral college votes to Trump's 232.

The 50 state legislatures have until December 14 to choose a raft of electors for presidential and vice-presidential candidates. A candidate must get 270 electoral college votes to win outright. If not, the US House of Representatives must decide the winner - as happened in 1800, 1824 and 1876 - voting in delegations with one vote for each state with Vice-President Mike Pence holding the casting vote. That outcome could allow Republicans to snatch a Trump victory from the jaws of defeat.

© AP Photo / Invision / Evan Agostini
Meghan McCain Blasts Support for Biden's OMB Pick Neera Tanden as Doubts Mount Over Her Candidacy
The Republicans have a majority in the legislatures of five of the six states where the Trump campaign is contesting the result: Arizona, Georgia, Michigan, Pennsylvania and Wisconsin. If legislators in any three of those five states block the appointment of electors, Biden will lack the crucial 270 votes.

Many states have laws obliging electors to vote for the candidates who won the most votes in that state, although harshest penalties for so-called 'faithless electors' are just a fine and disqualification form serving as an elector in future.