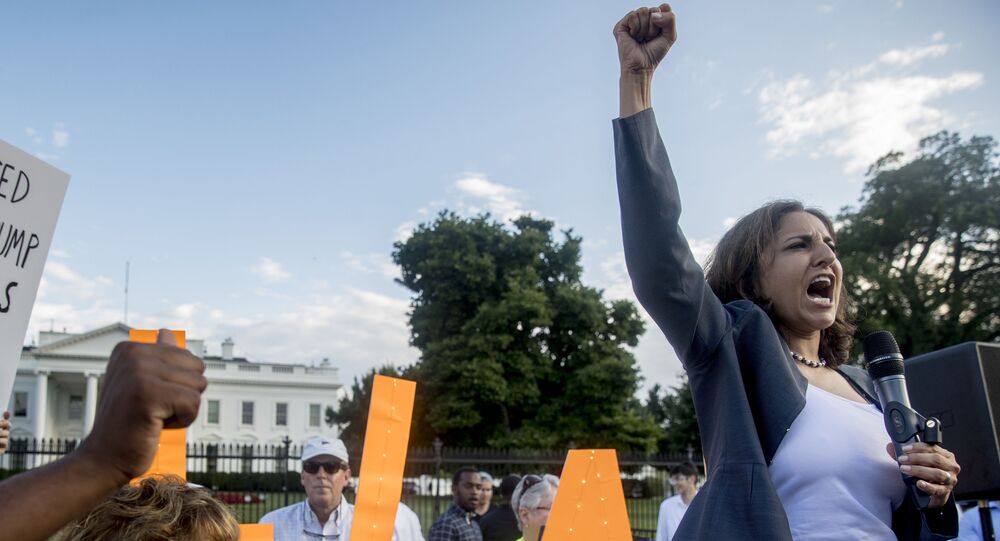 One of the projected economic voices in the White House is said to have placed a particular focus on what she previously said, or wrote, about her Republican opponents, some of whom are now to ultimately decide on her confirmation for a high-profile post.

Centre for American Progress President Neera Tanden, now tapped by Joe Biden for director of the White House Office of Management and Budget (OMB), appears to have deleted at least 1,000 posts in her Twitter feed in recent days amid reports about her potential nomination.

As shown by Social Blade analytics cited by The Washington Times, Tanden, the head of the liberal think tank, has made loads of deletions on her social media account since 19 November, with as many as 200 posts scrubbed on some of these days.

.@neeratanden appears to have deleted her tweets about Susan Collins, whose vote she'll likely need for confirmation.
h/t @varadmehta pic.twitter.com/atwonFCaMb

Based on a string of replies still visible in the Twitter feed, it can be concluded that Tanden at some point blasted Republican senators whose votes she will now need to be confirmed for the high-profile position.

Watching @neeratanden delete all her negative tweets about Republican Senators is hilarious. Her nomination is already a funeral.

In particular, responding to 2018 reports that Sen. Susan Collins of Maine saw "no basis" for delaying the US Supreme Court hearings for then-nominee Justice Brett Kavanaugh, Tanden reportedly tweeted, most laconically: "pathetic".

Separately, a number of deletions were found to imply that she opposed divisive COVID-19 restrictions, in common with the lion's share of Republicans, who pointed to the likelihood of the economic fallout being more harmful and ultimately deadlier than the health crisis itself.

"[She cited] France as an example of a country that was able to slow the spread of infection while keeping businesses open", the Washington Examiner reported.

Tanden, who was previously responsible for Hillary Clinton's first presidential campaign, was also recalled slamming projected President-elect Biden, when he was US vice president under Barack Obama. She allegedly stated in a leaked October 2015 email to a former chief of staff under Bill Clinton, John Podesta, that she was confident in Hillary Clinton running for president, and that Biden would make her "look better" if he ran.

"The good thing about a Biden run is that he would make Hillary look so much better", Tanden wrote at the time, according to the email. "What a mess today. Thanks for today and last night", she added.

As per Fox News, the Biden team declined to comment on the email, which was reported on the same day that Biden announced his withdrawal from the 2016 race for the Democratic nomination for the presidency.

© REUTERS / JOSHUA ROBERTS
U.S. President-elect Joe Biden speaks to the media as he departs from his transition headquarters in the Queen Theater in Wilmington, Delaware, U.S., November 24, 2020.

If 50-year-old Tanden, a daughter of Indian immigrants, is confirmed by the currently GOP-dominated Senate early next year, she will become the first Indian-American and first woman of colour to serve as the head of the presidential administration's powerful OMB.

Whatever the case, she has regularly clashed with the GOP in what Republicans say is likely to severely complicate her confirmation process.

The two Senate Republicans poised to lead committees that would preside over Tanden's confirmation hearings have both so far declined to commit to doing so. One of them is Sen. Rob Portman (R-Ohio), who is in line to chair the Senate Homeland Security and Governmental Affairs Committee.

He recently said he hopes that Biden will decide not to formally nominate Tanden, who previously also served as a senior adviser to President Barack Obama's Department of Health and Human Services, where she helped draft the Affordable Care Act.

Neera Tanden is smart, experienced, and qualified for the position of OMB Director.

The American people decisively voted for change - Mitch McConnell shouldn't block us from having a functioning government that gets to work for the people we serve.https://t.co/HX6FHVaaOD

The other potential committee chairman to lead Tanden's hearings, Sen. Lindsey Graham (R-S.C.), chuckled when asked about Tanden on Monday, noting that she has been really outspoken about him in the past. He also declined to commit to hearings for her, saying only that he'll "cross that bridge when we get there".