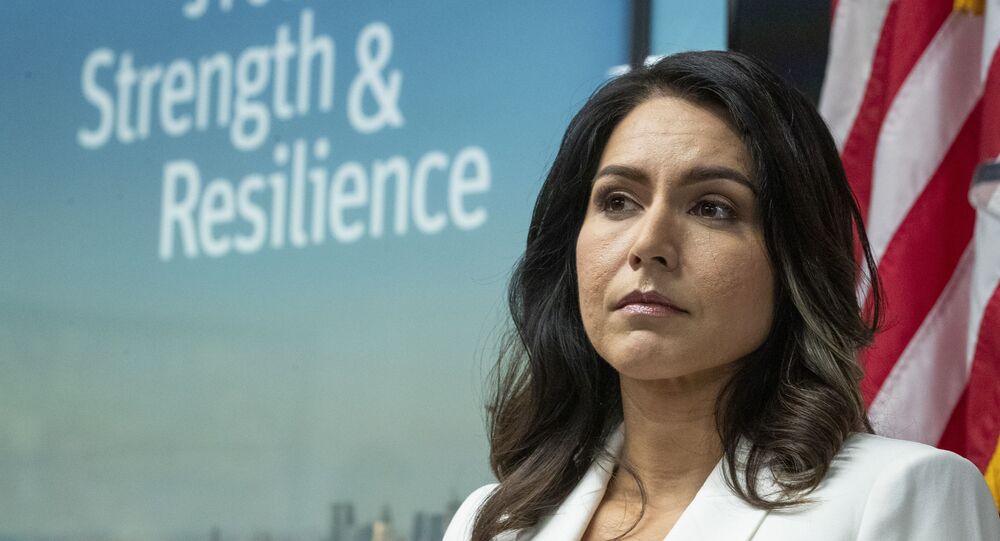 On Wednesday, President Donald Trump pardoned former national security adviser Michael Flynn. Flynn had pleaded guilty in 2017 to making "false and fraudulent statements" to the FBI regarding the nature of his conversations with the Russian ambassador during the Trump transition, but later retracted his plea and accused the FBI of framing him.

“@real Donald Trump Since you’re giving pardons to people, please consider those who, at great personal sacrifice, exposed the deception and criminality of those in the deep state,” Gabbard wrote, addressing Trump directly via his Twitter handle.

.@realDonaldTrump Since you're giving pardons to people, please consider pardoning those who, at great personal sacrifice, exposed the deception and criminality of those in the deep state. https://t.co/aeXklUsNSd

Gabbard’s tweet linked to a video dated 6 October in which she highlighted her previous efforts to introduce legislation in the House to drop criminal charges against Snowden and Assange, and to reform the Espionage Act of 1917.

“I’ve introduced legislation to stand up for and to protect brave whistleblowers who come forward to expose illegal actions within our own government or egregious abuses of power and to reform the Espionage Act. To make sure that if a whistleblower is prosecuted under the Espionage Act, they will have their fair day in court, something currently not allowable under the law as it stands today,” the congresswoman said in the video.

One of the pieces of legislation mentioned by Gabbard was co-sponsored by Florida Republican Congressman Matt Gaetz, who recently urged the President to pardon himself before leaving office to prevent his Democrat opponents of trying to prosecute him on some trumped-up charge out of “blood lust.” Trump later retweeted Gaetz’ pardon-related remarks.

President Trump should pardon Flynn, the Thanksgiving turkey, and everyone from himself, to his admin, to Joe Exotic if he has to.

The Left has a bloodlust that will only be quenched if they come for those who fought with @realDonaldTrump to deliver for the American people. pic.twitter.com/wdTfu3Xwmp

The lawmakers’ comments come in the wake of Trump’s decision to pardon former National Security Adviser, three-star Lieutenant-General Michael Flynn. Flynn was charged with lying to the FBI about his conversations with Russian Ambassador Sergei Kislyak during the Trump transition in late 2016. He first pleaded guilty but later retracted the plea after it became apparent through leaked documents that the FBI had deliberately tricked him into making false statements. In May, the Department of Justice moved to dismiss Flynn’s prosecution. However, Judge Emmet Sullivan, who oversaw the case, put the DoJ’s attempt to close the case on hold.

© AP Photo / Mary Altaffer
Former Democratic Presidential Candidate Tulsi Gabbard Urges US Congress to Expel Turkey From NATO
Gabbard, 39, is an active duty member of the Hawaii National Guard, and has carried out two tours of duty in the Middle East, including deployment in Iraq in 2004. She has been something of a maverick within the Democrat Party, attacking both Trump and establishment Democrats over US foreign policy, urging Washington to begin an immediate pull-out of troops from Iraq and Syria, refusing to vote to impeach Trump, attacking the mainstream media for smearing her, and starting, and then dropping, a defamation lawsuit against Hillary Clinton over the former secretary of state’s accusations that Gabbard was a “favourite of the Russians” and a potential “Russian asset.”

Snowden, indicted under the Espionage Act for his role in revealing the extent of the National Security Agency’s ability to carry out illegal mass surveillance of Americans, has been living in Russia since 2013, and recently filed documents to extend his residence permit for three more years. In August, Trump said he was sympathetic to those “that think that [Snowden] is not being treated fairly,” prompting a ‘pardon Snowden’ movement to swell online.

Snowden, who has indicated repeatedly that he would like to return to the US, retweeted Gabbard’s latest tweet, and tweeted that he has “seen more calls for pardon this year than in all others combined".

I have seen more calls for pardon this year than in all others combined. No other issue in our time unites left, right, and center like the struggle to end governments' abuse of mass surveillance and secrecy, and that would not be true without you -- and your advocacy. Thank you.

Julian Assange remains locked up in a British prison as the result of a long-running trial to extradite him to the United States. If extradited and convicted, he would face up to 175 years in prison over 18 separate charges, most of them related to violations of the Espionage Act.

© REUTERS / PETER NICHOLLS
Assange's Father Says His Son Facing Persecution, Not Prosecution
Assange has been imprisoned since April 2019, after being dragged out of the Ecuadorian Embassy in London where he had taken refuge in June 2012. In September, one of Assange’s lawyers revealed that he had rejected an offer of a pardon or a guarantee of non-prosecution from US officials in exchange for information about the source of the 2016 Democratic National Commission leaks on the party’s efforts to sabotage Bernie Sanders’ presidential campaign.
...
Reddit
Google+
Blogger
Pinterest
StumbleUpon
Telegram
WhatsApp
971