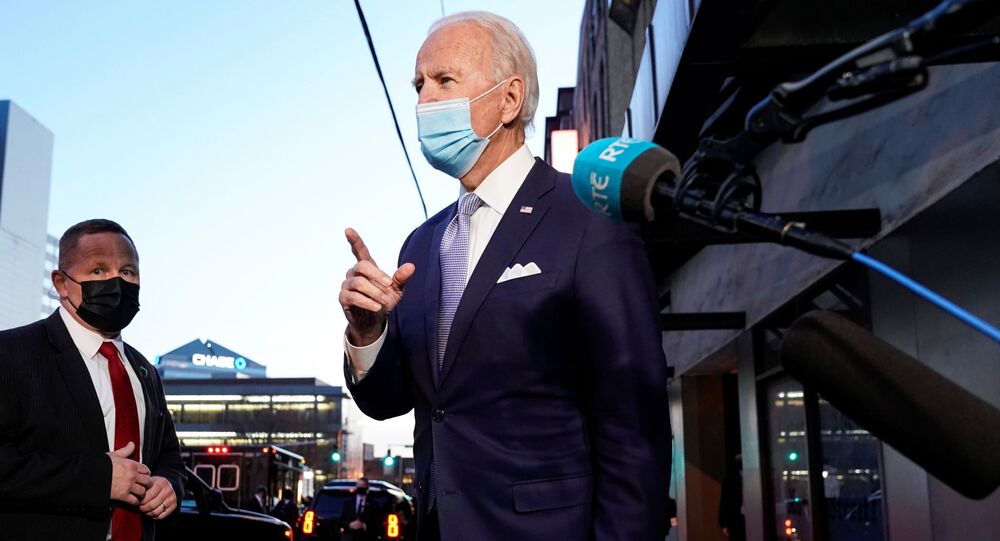 Video: Biden Says ‘Grim Season of Division’ Will Give Way to Unity in Thanksgiving Address

Ahead of the Thanksgiving holiday in which Americans gather together with their families, presumed US President-elect Joe Biden addressed the nation in an effort to deliver a message of hope and unity as much of the country continues to struggle with effects of the COVID-19 pandemic.

Speaking from Wilmington, Delaware, Biden urged the American public to resist surrendering to the “fatigue” of the pandemic while promising that better times are ahead as the nation works to curb the spread of the deadly respiratory disease.

“Looking back over our history, you see that it’s been in the most difficult circumstances that the soul of our nation has been forged, and now we find ourselves again facing a long, hard winter. We fought nearly a yearlong battle with a virus that has devastated this nation, brought us pain, loss and frustration and has cost so many lives,” Biden told viewers. “It’s divided us, angered us, set us against one another.”

“We need to remember we’re at war with the virus, not with one another, not with each other. This is the moment where we need to steel our spines, redouble our efforts and recommit ourselves to the fight. ... We’re all in this together,” he underscored.

Days ahead of the Thanksgiving holiday, the US Centers for Disease Control and Prevention issued new guidance, calling for Americans to stay put and instead opt for virtual celebrations so as to not inadvertently accelerate the spread of COVID-19.

Biden stated that it was Americans’ “patriotic duty” to follow preventative measures promoted by health professionals, noting that his family would also be hosting separate Thanksgiving dinners.

“I know how hard it is to forgo family traditions, but it’s so very important,” he said. “If it means wearing a mask, keeping social distance, limiting the size of any group we’re in - until we have a vaccine, these will be the most effective tools to combat the virus.”

At present, there are three vaccine candidates being hailed by health officials as potentially effective against COVID-19, of which only one has been officially submitted for review to the Vaccines and Related Biological Products Advisory Committee of the US Food and Drug Administration (FDA). Following the review, the FDA is set to decide on whether or not to grant an emergency use authorization for an approved vaccine candidate.

The latest forecasts suggest that an approved vaccine may undergo mass distribution starting in late December to early January, with the first doses being given to first responders and those most vulnerable to COVID-19.

“It’s gonna take time. Don’t let yourself surrender to the fatigue. America is not gonna lose this war. We will get our lives back … this will not last forever,” Biden reiterated. “I believe that this grim season of division, demonization is going to give way to a year of light and of unity. … because America is a nation not of adversaries but of neighbors. “

US Democracy Tested, Learned Americans ‘Up to the Task’

In light of the contentious presidential election being held in the middle of a pandemic, the projected president-elect also indicated Americans “must be thankful for democracy,” as the nation proved that it was still able to conduct the vote.

Figures suggest that the 2020 presidential election saw more votes cast than in any other US election in history. Shattering the  total from former US President Barack Obama’s 2008 win, Biden earned some 80 million votes.

“Our democracy was tested this year, and what we learned was this: the people of this nation are up to the task,” Biden said. “In America, we have full and fair and free elections, and then we honor the results.”

“The people of this nation and the laws of this land won't stand for anything else,” he added.

Although the General Services Administration has initiated the first steps of the transition from the Trump administration to a Biden presidency, US President Donald Trump has not officially conceded the election. Trump has vowed to continue his legal challenges in battleground states, alleging rampant voter fraud.