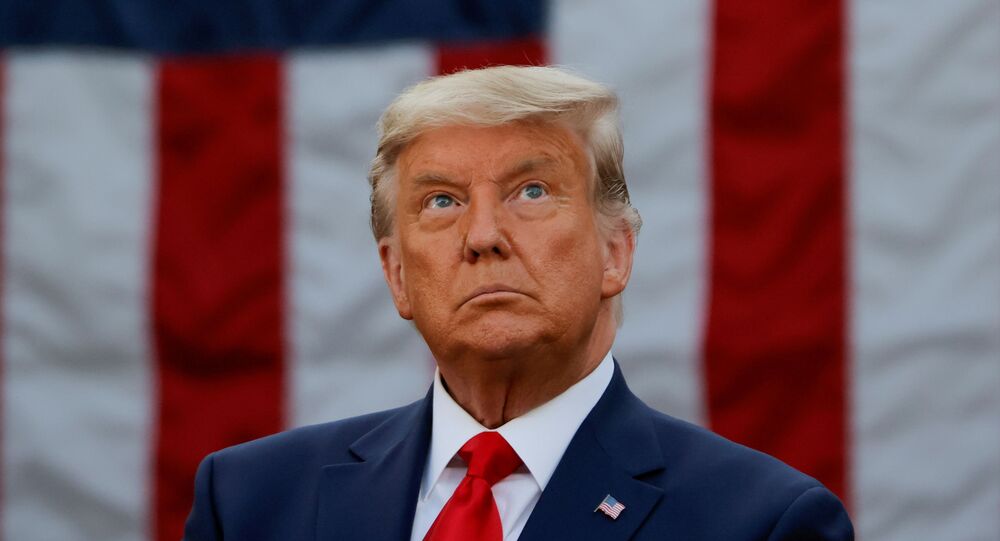 What's Behind Trump’s Refusal to Concede & Will the GOP Stand by Him Until the Bitter End?

Republican politicians have doubled down on persuading Donald Trump to lay down arms and recognise his defeat in the 2020 presidential election. US observers have discussed what appears to be a growing split within the GOP and Trump's rationale behind his refusal to concede.

On Monday, Trump pledged to win re-election despite authorising the General Services Administration (GSA) to provide transition of resources for the Joe Biden campaign earlier in the day. "Our case strongly continues, we will keep up the good fight, and I believe we will prevail!" tweeted the president.

Is There Growing Dissent Within the GOP?

As of 23 November, Team Trump and a number of Republican groups were pursuing 16 post-election legal challenges in the four battleground states of Pennsylvania, Michigan, Georgia, and Nevada, according to The Epoch Times. Meanwhile, a number of Republican politicians have raised their voices urging the president to concede. While former Trump administration National Security Adviser H.R. McMaster told CBS’ Face the Nation that Trump’s efforts were "very corrosive", New Jersey Gov. Chris Christie has even gone so far as to brand the conduct of the Trump legal team as a "national embarrassment".

Still, the GOP congressional leadership, including Senate Majority Leader Mitch McConnell and House Minority Leader Kevin McCarthy, has not joined this chorus. At the same time, 65% of pro-GOP respondents support Trump’s decision not to concede, according to Vox and Data for Progress' latest survey. In addition, 73% of likely Republican voters and 44% of all likely voters doubt that Joe Biden won the 2020 race fair and square.

"No credible person doubts rampant voter fraud in the 2020 elections", says Paul Valone, a political commentator and executive director of Rights Watch International. "But many Republicans assume the conventional view that recounts won’t be enough to change outcomes in battleground states".

The level of division within the GOP is growing with each day that Trump continues his efforts to challenge the results of the election, alleges Jon R. Taylor, professor at the University of Texas at San Antonio.

"The longer that Trump pursues his challenges and efforts to undermine the legitimacy of the election with claims of massive voter fraud, the bigger the divisions will likely grow between Trump loyalists and those who want to move on from the Trump era and focus on dealing with the incoming Biden administration", he says.

Joining @JohnFBachman on @newsmax to discuss the latest in our legal fight for election integrity and why the GSA’s “transition” doesn’t matter constitutionally.

​For his part, Ron Coleman, a New York attorney and political commentator, expresses scepticism over GOP politicians' demarches against the president, suggesting that some of them merely want to grab the media attention. He asserts that there's zero possibility that Trump's entourage will persuade the president to concede until all legal and constitutional measures have been attempted.

"People like [former National Security Adviser] McMaster want to continue to receive opportunities to appear on television programmes broadcast on networks operated by the Democratic Party, such as CBS", Coleman notes. "I don’t know if he had an opinion about the challenge by Al Gore to George W. Bush, but this is no more 'corrosive' or inappropriate than that one was".

The 2000 Bush-Gore row over the election results in Florida lasted for more than a month until the US Supreme Court reversed a Florida Supreme Court request and granted victory to Republican candidate George W. Bush.

"There has always been a solid core of people within the party who crave social and professional advantage more than they are interested in supporting the Republican agenda", he says. "Given that Trump looks to [the GOP] as if he is going to be defeated by a concerted effort by the press and the Democrats to both set up and rationalise the results in a plainly fraudulent election, being associated with a losing effort is a frightening prospect to many".

Meanwhile, Trump dropped a hint that he would "never concede" to what he called "the most corrupt election in American political history", "fake ballots", and "Dominion" – a reference to the Dominion Voting Systems elections platform which came under criticism from the Republicans over alleged election machinations.

​The company has repeatedly denied the accusations, with Dominion spokesperson Michael Steel telling Fox News on Sunday that "nothing that they are saying is remotely true".

"A big question being asked is why isn't Trump conceding? What is his goal?" asks Paul Poast, an associate professor in the Department of Political Science at the University of Chicago.

Trump is not actually trying to overturn the election result or trying to "salt the earth" for the Biden team just out of spite, the academic suggests.

"Instead, I think he is stalling for time in the hope of creating enough anxiety that he can 'cut a deal' where he concedes in return for a pardon (not just at the federal level, but at the state level as well)", Poast presumes, adding that the president is facing "a host of legal issues" and "pardons are his last option".

While Jon R. Taylor believes that it will take the meeting of the Electoral College and the official casting of electoral votes to persuade Trump that the election is over, he does not rule out that the incumbent president won’t concede nevertheless.

"He may acknowledge Biden's victory – particularly on January 6th when Congress meets in joint session to officially read and certify the electoral votes – but he may very well never formally concede and use it as a venue for opposing Biden for the next four years while hinting at another run in 2024", he presumes.

However, it appears that the GOP and the president's genuine concern is the integrity and the future of the US election process, argue Ron Coleman and Paul Valone.

"There is also no question that the Trump campaign is trying to use litigation to shoot at a moving target, in terms of political machinations by the Democrats, making it much more difficult for them to succeed in the courts", Coleman says. "I still believe, however, that the scope and nature of the election fraud here will eventually be considered appropriately and will not be ignored by the judiciary".

"The sheer scale of election fraud must be addressed if we are ever again to have fair elections", echoes Valone, citing Trump's senior legal adviser Jenna Ellis, who recently described the election results as “irredeemably compromised”.

If true, the resolution of the election debacle may fall to Congress, according to him.

"[There], on January 6, any single US House representative and US Senator may object to the report of a state’s electors, paving the way for the US House to elect the president not by a majority of representatives, but of state delegations, which Republicans hold", Valone says. "Although pundits may describe this as a 'constitutional crisis', it is precisely what the Framers intended".