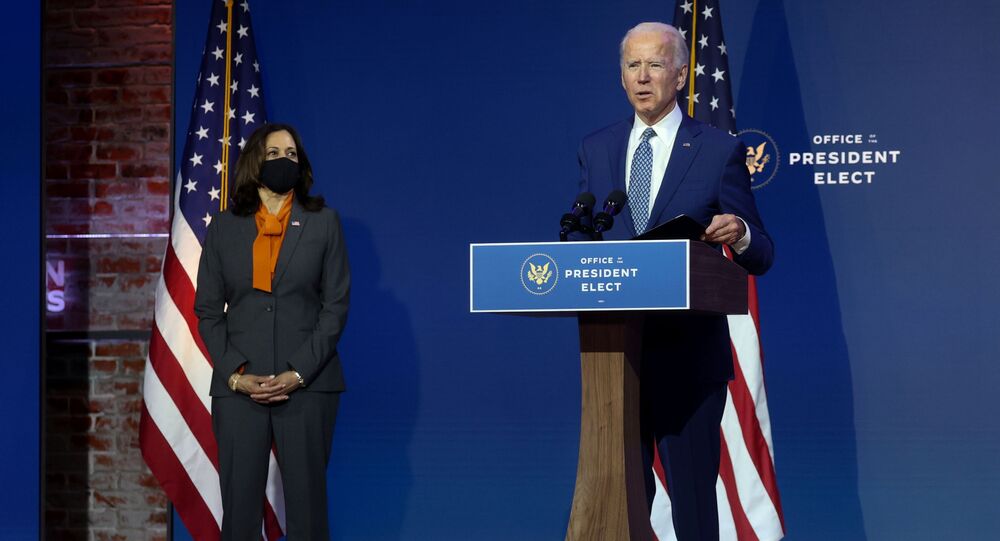 Despite US President Donald Trump's continued fight to expose alleged voter fraud in the 2020 US election, Joe Biden, the media's presumptive winner of the presidential race, has confirmed a total of six nominees for the potential Democrat-led Cabinet in the areas of foreign policy and national security.

Citing Biden's transition office, the New York Times reported Monday that the Democratic presidential nominee intends to nominate Alejandro Mayorkas, a fellow official from the administration of former US President Barack Obama, as secretary for the Department of Homeland Security (DHS). If confirmed, the Cuban-American lawyer would be the first Latino to head the department.

Mayorkas entered the Obama administration as director of US Citizenship and Immigration Services in 2009, following a unanimous Senate confirmation vote. He was then promoted to DHS deputy secretary and held the position from 2013 to 2016.

Biden was initially slated to make this announcement and more nominations during a Tuesday address from Wilmington, Delaware. However, the Biden-Harris campaign published a statement on Monday announcing an array of Cabinet and high-level administration nominations.

Under the Biden-Harris administration, American national security and foreign policy will be led by experienced professionals ready to restore principled leadership on the world stage and dignified leadership at home. Read more: https://t.co/ojrTxrzafV

"We have no time to lose when it comes to our national security and foreign policy," Biden said in a November 23 statement, as reported by NBC News. "I need a team ready on Day One to help me reclaim America’s seat at the head of the table, rally the world to meet the biggest challenges we face, and advance our security, prosperity, and values. This is the crux of that team."

US foreign service veteran Linda Thomas-Greenfield, who served as assistant secretary of state for African affairs between 2013 and 2017, will be nominated as US ambassador to the United Nations, according to the transition office.

The UN ambassador position will also be elevated to Cabinet-level status, sources noted to the NYT. Trump removed the ambassador seat from his Cabinet following Nikki Haley's 2018 exit from the position.

Thomas-Greenfield, who is a Black American woman, is expected to be one of many diverse nominees for Biden's cabinet.

Biden-Harris Administration to Prioritize 'Diversity of Ideology and Background'

"These individuals are equally as experienced and crisis-tested as they are innovative and imaginative," Biden argued in his Monday release. "Their accomplishments in diplomacy are unmatched, but they also reflect the idea that we cannot meet the profound challenges of this new moment with old thinking and unchanged habits -- or without diversity of background and perspective. It’s why I’ve selected them.”

Biden's transition office also confirmed reports that former US Deputy Secretary of State Antony Blinken and Jake Sullivan had been selected to serve on the Democrat's potential administration.

President-elect Biden taught me what it takes to safeguard our national security at the highest levels of our government. Now, he has asked me to serve as his National Security Advisor. In service, I will do everything in my power to keep our country safe.

Blinken was tapped for US secretary of state, and Sullivan, formerly a senior policy adviser with Hillary Clinton's Department of State, received the nomination to serve as Biden's national security adviser.

Former US Secretary of State John Kerry was also picked by Biden to serve as special presidential envoy for climate. The 76-year-old Democrat publicly accepted the nomination via social media Monday.

"The transition — like the Biden-Harris administration to follow — will prioritize the following core values: diversity of ideology and background; talent to address society’s most complex challenges; integrity and the highest ethical standards to serve the American people and not special interests; and transparency to garner trust at every stage," the Biden-Harris transition website notes.

Despite the announcement, formal proceedings for the Biden-Harris campaign transition have yet to begin, as General Services Administration chief Emily Murphy has not signed the required letter of "ascertainment" to confirm a Democratic victory in the presidential race.

“Today, the Trump campaign filed a petition for recount in Georgia. We are focused on ensuring that every aspect of Georgia State Law and the US Constitution are followed so that every legal vote is counted," the campaign argued in a Saturday release following the state's certification of a Biden victory.

The Friday results announced by Georgia Secretary of State Brad Raffensperger revealed Biden received 49.5% of the votes in Georgia, translating to a 12,000-vote victory over his Republican rival, who received 49.3% of the vote.

Georgia law allows candidates to request a recount if the results are within 0.5%.

China Launches Chang'e-5 Spaceship to the Moon From Hainan