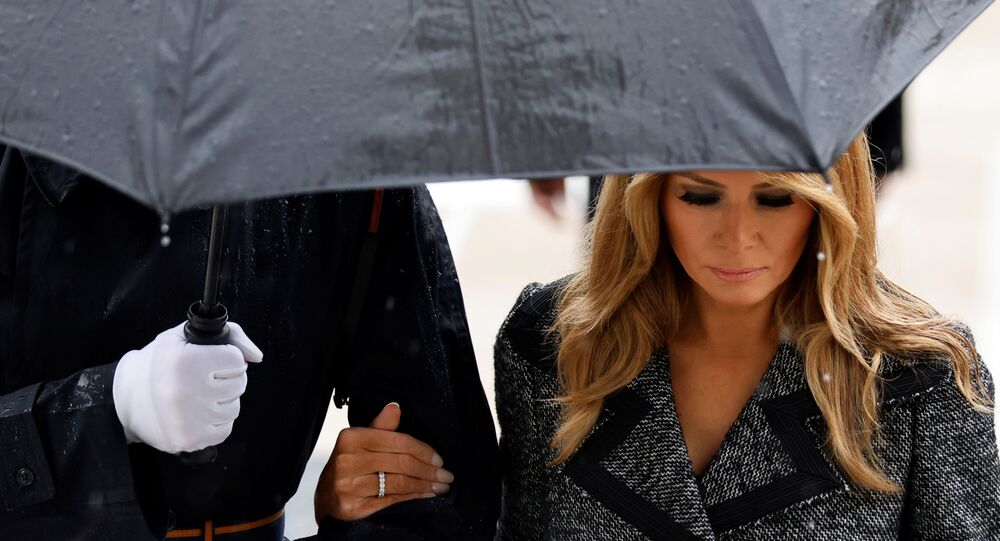 Few could resist the temptation to nail FLOTUS over her alleged hypocrisy as she announced what the major US government building would look like during the approaching Christmas season. However, for many it happened to be a perfectly joyous matter to speculate on.

First Lady Melania Trump has met a barrage of furious remarks over her revelation of what type of a Christmas tree the White House is going to have for this year's celebrations. She took to Twitter, posting the following:

"Since 1966, the arrival of the White House Christmas Tree has become an iconic holiday tradition. This year's tree, a lovely 18 ½ foot Fraser Fir from Dan and Bryan Trees of West Virginia, will arrive tomorrow at the White House North Portico".

However, not everyone welcomed the announcement with enthusiasm, implying in their comments that FLOTUS might be hypocritical in her alleged preparedness to run Christmas-related errands around her husband's office.

Some, in particular, recalled leaks circulated by media earlier this year that cited Melania ostensibly sharing with her former friend Stephanie Winston Wolkoff that she bemoaned her job. At the time, she reportedly said, as heard from an audio recording:

I thought you hated decorating for Christmas?

Another posted, citing worrisome coronavirus statistics across the US:

"I know. I'm predicting he's going to have a golfing extravaganza over the Thanksgiving weekend and to think Melania is going to unveil her latest Christmas tree disaster!"

"Well there's a f***ing Christmas tree...by Melania!", a third weighed in along the same lines.

Other critics chose to point to another "tradition" – for an incumbent president to concede a lost election.

Another tradition is when the president loses the election, he gives a concession speech and starts the transition to the new government. That would be a good tradition to continue.

Yet, quite a few decided not to mix the upcoming festive season with politics, anticipating the arrival of the major Christmas landmark at 1600 Pennsylvania Avenue. Some even cheekily – albeit supportively - called the rest not to bully the embattled FLOTUS:

Be kind...I was startled to find out Melania had any duties to return to. I guess those f-ing trees won't decorate themselves. 😂

The comments came as Melania's husband, who hasn't yet conceded to his Democratic rival Joe Biden, continues to contest the results of the 3 November vote, having filed a string of lawsuits over alleged voter fraud. Shortly after the US mainstream media projected that Biden had won, FLOTUS Melania Trump tweeted assertively:

"The American people deserve fair elections. Every legal – not illegal – vote should be counted".

The Trump campaign has since pumped out "evidence" of suspected voter fraud around a number of swing states, accusing the Democrats of a well-coordinated and "centralised" effort to "steal the election" and retrieving anything from charts showing alleged vote dumping to illegal coaching of poll staffers in Democrat-governed cities.

Nevertheless, last Thursday, the Trump team withdrew a lawsuit in Michigan, one of several in question alongside Georgia and Pennsylvania, suggesting that his campaign had achieved its goal of ensuring that every vote had been fairly counted.