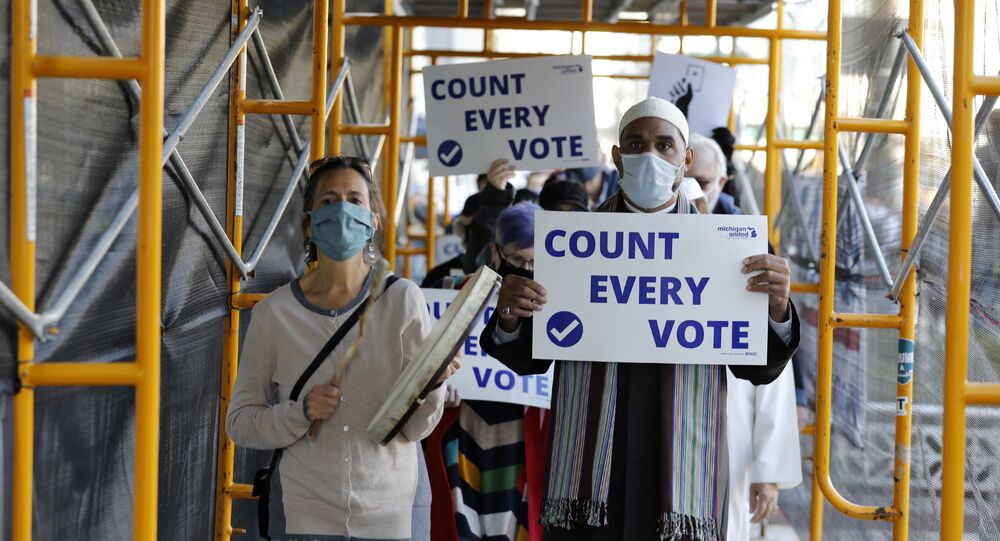 The reelection campaign of US President Donald Trump recently dropped its lawsuit regarding vote certification in Detroit, Michigan, and the greater Wayne County, but the facts presented in that withdrawal were deliberately "false" and "misleading" to the American public, according to the city of Detroit.

Attorneys for the Motor City filed a motion on Thursday in the US District Court for the Western District of Michigan, chiding a same-day, earlier filing by Mark F. “Thor” Hearne II, which erroneously claimed Wayne County Board of Canvassers “declined to certify the results of the presidential election.”

Though Republican members of the Board of Canvassers initially refused to certify the results, they ultimately reversed their decision following virtual outcry from constituents.

The city claimed the Trump campaign provided the court with "impertinent and false language" to make a “gratuitous, public statement about their purported reason for voluntary dismissal, before the Court could reject their baseless claims of election fraud.”

Attorneys for Detroit wrote that federal law allows the Trump campaign's legal team to "voluntarily dismiss their claims, but it does not allow them to use a Notice of Dismissal to spread disinformation."

The city of Detroit emphasized that US District Judge Janet Neff possessed "the authority to strike materials from the record as a sanction."

The contested claims filed by the reelection campaign on Thursday echo Trump's claims that the Republican board members were "threatened, screamed at and viciously harassed" until they were "FORCED to change their vote."

Trump's comment was flagged by Twitter and slapped with an advisory detailing, "This claim about election fraud is disputed."

Wrong! At first they voted against because there were far more VOTES than PEOPLE (Sad!). Then they were threatened, screamed at and viciously harassed, and were FORCED to change their vote, but then REFUSED, as American patriots, to sign the documents. 71% MESS. Don’t Harass! https://t.co/n5frpesHfD

The two board members did attempt to rescind their certification, but the move was merely symbolic.

Michigan Senate Majority Leader Mike Shirkey and Michigan House Speaker Lee Chatfield - legislative chamber leaders for the Michigan GOP - met with the US president at the White House on Friday.

The details of the meeting remain unknown. However, Trump abruptly summoned the lawmakers on Thursday, the same day he took to Twitter and highlighted voter entry data that logged Democratic challenger Joe Biden receiving 134,886 votes out of a group received in the early hours of November 4, amounting to 96% of the votes for that "dump."

Look at this in Michigan! A day AFTER the election, Biden receives a dump of 134,886 votes at 6:31AM! https://t.co/CTDaWTNs29 pic.twitter.com/nSmc2olraF

"Numerous courts, election officials from both parties, and even officials within Trump's own administration, have all reaffirmed that claims of widespread voter fraud are categorically false," stated Biden campaign spokesman Michael Gwin, CNBC reported.

While the Michigan lawsuit was dropped by the Trump campaign, the US president's decision to meet with Shirkey and Chatfield signals more is to come regarding the state's 2020 election votes.

The Wayne County board is scheduled to meet on November 23 to issue its final certification.