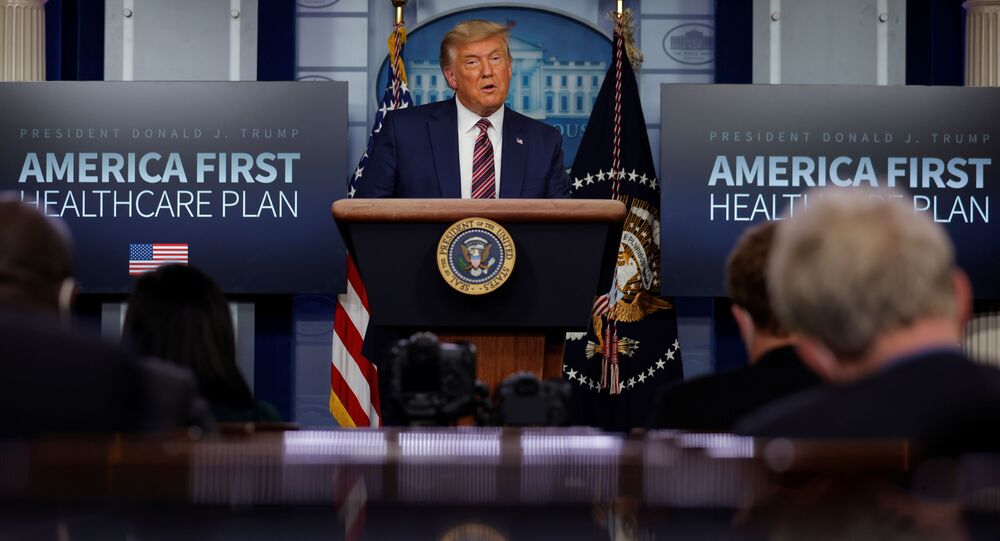 In September, US President Donald Trump issued an executive order to lower prescription drug prices, noting that “Americans pay more per capita for prescription drugs than residents of any other developed country in the world.”

US President Donald Trump announced, during Friday remarks at the White House, two "groundbreaking" rules to lower drug prices, that, according to him, will "save American seniors millions of dollars" in the cost of prescription drugs.

The first rule, Trump said, will require drug discounts be passed on directly to patients, instead of using what he termed "middlemen". The second rule will price prescription drugs for Medicare based on the lowest price paid by other countries.

“We take the lowest price and we match whatever the lowest price is, leading to colossal savings for all Americans,” Trump said, talking about what he described as the "most-favoured nation rule".

Delivering the remarks, POTUS also said that Unapproved Drug Initiative (UDI), which required manufacturers to remove drugs that were not approved by the US Food and Drug Administration (FDA) from the market, will be cancelled.

According to a Vizient study, UDI, initially designed to remove potentially unsafe medications from the market, in fact resulted in manufacturers who obtained approval from FDA instituting drastic drug price increases.

After unveiling the two rules on drug prices, Trump mention the election and again declared himself as the winner, complaining that his campaign had media, big tech and particularly big pharma "against us", and contradicting projections by US mainstream media awarding Democrat Joe Biden the election win.

"Big Pharma ran millions of dollars of negative advertisements against me during the campaign, which I won by the way", he asserted. "Almost 74 million votes. We had big pharma against us, the media against us, big tech against us and a lot of dishonesty against us".

Trump praised his administration's efforts in delivering a coronavirus vaccine.

"You wouldn't have a vaccine if it weren't for me for another four years, because FDA would never be able to do what they did, what I forced them to do", Trump claimed.

"It defies logic that the administration is blindly proceeding with a "most favored nation" policy that gives foreign governments the upper hand in deciding the value of medicines in the United States", he said. "History proves that when the governments take unilateral action to set prices, it disrupts patient access to treatments, discourages investment in new medicines and threatens jobs and economic growth."

© REUTERS / CARLOS BARRIA
U.S. President Donald Trump arrives at the podium to speak about prescription drug prices during an appearance in the Brady Press Briefing Room at the White House in Washington, U.S., November 20, 2020

On 13 September, an executive order on lowering drug prices "putting America first" was issued, saying that "it is unacceptable that Americans pay more for the exact same drugs, often made in the exact same places".

"Other countries’ governments regulate drug prices by negotiating with drug manufacturers to secure bargain prices, leaving Americans to make up the difference — effectively subsidizing innovation and lower-cost drugs for the rest of the world", the order said. "Americans should not bear extra burdens to compensate for the shortfalls that result from the nationalized public healthcare systems of wealthy countries abroad."

The rule, described as "Most Favoured Nation Rule", had been discussed for over a year, and could potentially cut Medicare payments by billions of dollars, with experts, however, suggesting that it could also meet backlash from the industry and was likely to face legal actions from drugmakers.