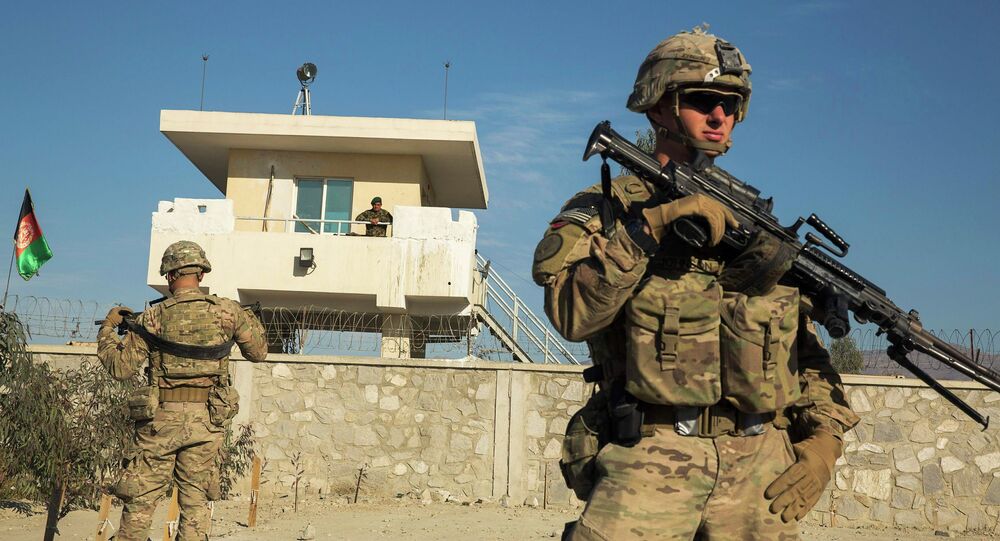 The new Pentagon chief has announced an American troop pull-out from Afghanistan as the 19-year long war is seemingly coming to an end. However, it's not enough, says Pakistani political analyst Sabtain Ahmed Dar, outlining the importance of Washington and Islamabad's role in backing Kabul's reconciliation with the Taliban in the coming years.

On 16 November, the Trump administration ordered the return of 2,500 US troops from Iraq and Afghanistan, thus reducing the American presence in the countries from 3,000 to 2,500 and from 4,500 to 2,500, respectively.

Announcing the move, Acting Defence Secretary Christopher C. Miller told reporters that the decision was in keeping with President Trump's promise to end "forever wars". Miller replaced former Pentagon chief Mark Esper on 9 November together with Anthony Tata, Ezra Cohen-Watnick and Kash Patel, who filled key DoD roles after a series of resignations in the department.

The US military withdrawal was one of the key provisions of Washington's deal with the Taliban* which was signed on 29 February 2020 in Doha. In exchange the group, which refers to itself as the Islamic Emirate of Afghanistan, was obligated to cease military activities and engage in intra-talks with the country's government.

“Today’s reform is directly aligned with all three of my priorities, as outlined in my Message to the Force on Monday: pic.twitter.com/St0P3FBaSK

​On 10 November, the Taliban called on Joe Biden, who the media predicted to win the election, to stay committed to the Doha peace accord.

It is unclear what strategy Biden would pursue; however, even the slightest policy shift in the US-Taliban deal may jeopardise peace in the Central Asian state, says Sabtain Ahmed Dar, a Pakistani political analyst, academic and author.

He praises Donald Trump's decision to start negotiations with the Taliban which, according to him, has broken a decades-long impasse and paved the way to peace in the war-torn Central Asian country.

"The prime reason why conflict resolution in the Afghan crisis went smoothly since September 2019 is the realisation by the Trump administration that without reconciliation with the Taliban, there is no exit from Afghanistan," he notes, adding that Islamabad played an important role in the process.

However, Joe Biden would likely oppose the complete pull-out because that would upend "a two-decades long US narrative about the Taliban movement and its alleged ties with Al-Qaeda", according to the author.

"[At the same time] Biden is not going to be comfortable with the present standoff among intra-Afghan stakeholders", he suggests. "Here a glitch can occur in the entire peace process, and it is going to happen through the hand of the Kabul government, which has often felt irrelevant during the entire Afghan peace process. They might find this as a great loophole to play with for their possible inclusion in the Afghan peace process, something that the Taliban does not like".

Nevertheless, Dar expresses hope that Biden will not abandon the Afghan peace process and continue to stick to the main provisions of the US-Taliban deal.

After US mainstream media declared Biden the projected winner of the race, Afghan President Ashraf Ghani called upon the ex-vice president to "help fight terrorism" in the Central Asian state and further deepen the "multilayered strategic partnership" between Kabul and Washington. At the same time, Afghan politicians have repeatedly voiced concerns over Trump's "speedy" pull-out of US troops from the region.

Biden is likely to keep a residual counter-terrorism force in Afghanistan, wrote Stars and Stripes on 10 November, citing its September interview with the former vice president. The US military newspaper also suggested that Biden would "retain most aspects of the deal" struck between the Taliban and the Trump administration.

Furthermore, in February the Democratic presidential contender told CBS News straightforwardly that America bears “zero responsibility’’ if the Taliban come back to power in Afghanistan after the drawdown.

For its part, Pakistan, Afghanistan's closest regional ally, is ready to work with any US administration, while supporting its Central Asian neighbour, says Dar.

"It is important to understand Pakistan’s latest policy shift in its dealings with the US. Pakistan’s foremost foreign policy objective states that 'we will not become party to any US war'," the academic emphasises. "Pakistan wants good relations with the United States and wants Washington to have a continued role in the Afghan peace process."

At the same time, Islamabad will continue to advocate a political role for the Taliban in the future Kabul government and urge the White House to endorse the new hybrid power structure, according to Dar.

"A shared vision and finding common ground for power structure for the Afghan’s future between Kabul and the Taliban is crucial," he believes. "In any case, both Taliban and Kabul will have to come to an agreement and devise a power-sharing manifesto that can execute itself structurally towards a hybrid political system."

After decades of hostilities the ultimate peaceful settlement between Kabul and the Taliban's political leadership is of utmost importance, the Pakistani analyst highlights. At the same time, the Afghan government's apparent attempts to disrupt this process and exclude the Taliban from the country's political life should be prevented for the peace's sake, according to him.

"If not duly integrated in a power sharing arrangement, thus, the Taliban probably will continue to strive for their rights and even use militancy to accomplish their objectives," the academic warns.

*The Taliban is designated as a terrorist group in Russia.