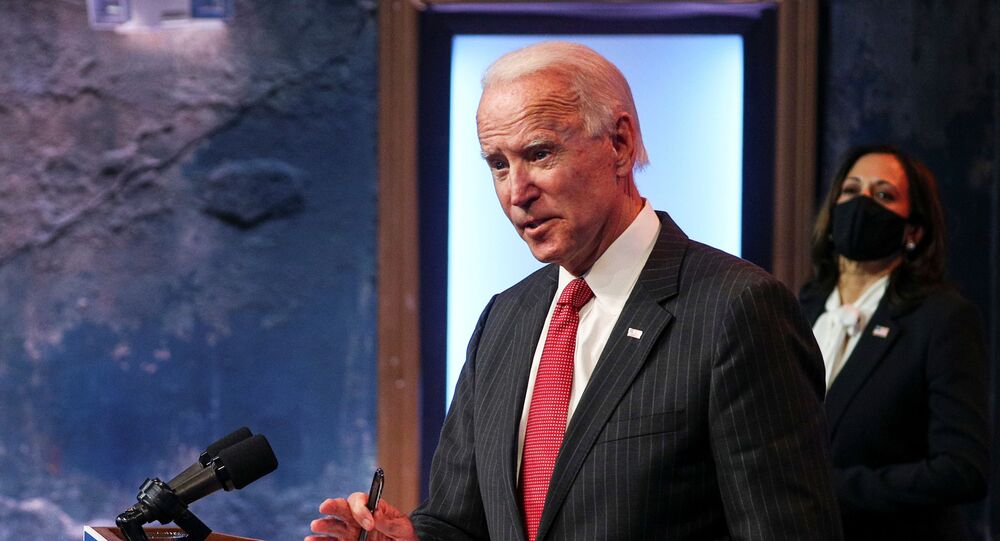 Although the official results of the US presidential election are to arrive in December, Joe Biden has been projected by mainstream American media to win the White House race - something that the Trump campaign continues to protest, claiming "election fraud".

Projected US President-elect Joe Biden said on Thursday that he has not ruled out filing a lawsuit against the Trump administration and the General Services Administration (GSA), the latter an agency that, among its many other duties, must approve the transition of power.

Commenting on the GSA not yet acknowledging the Biden-Harris ticket as the winner of the 2020 presidential election, Biden said that the foot-dragging is preventing his team from accessing information from "various agencies".

"We don't have access to all the information we need to get from all the various agencies", he said. "We’re not able to deal with everything from testing to guidance to the all-important issue of vaccine distribution and more importantly a vaccination plan".

Biden also announced that he would soon reveal his choice for the next Treasury Secretary. Commenting on Trump's resistance to acknowledging his own projected defeat in the election, the Democrat said the sitting president was acting in a way that is "totally irresponsible".

"You will soon hear my choice on Treasury. I made that decision, we made this decision, and you will hear that even just before or after Thanksgiving," Biden told reporters.

While the official election results will be released in December, mainstream US media have almost unanimously projected the Biden-Harris ticket to win the presidency, and both the candidate and running mate Kamala Harris have received congratulations from some world leaders and celebrities.

Although the official results will not be announced until December, Biden has begun to assemble his presidential cabinet and administration.

Trump continues to refuse to acknowledge the preliminary results, repeatedly claiming that he won the election. His team has alleged what they refer to as "massive" election fraud and have filed multiple lawsuits in several states, calling to stop counting what they describe as "illegal votes".

Biden Builds Out His, Not So New, Team

US Health Dept. Says Will Not Work With Biden Until Official Announcement of His Victory