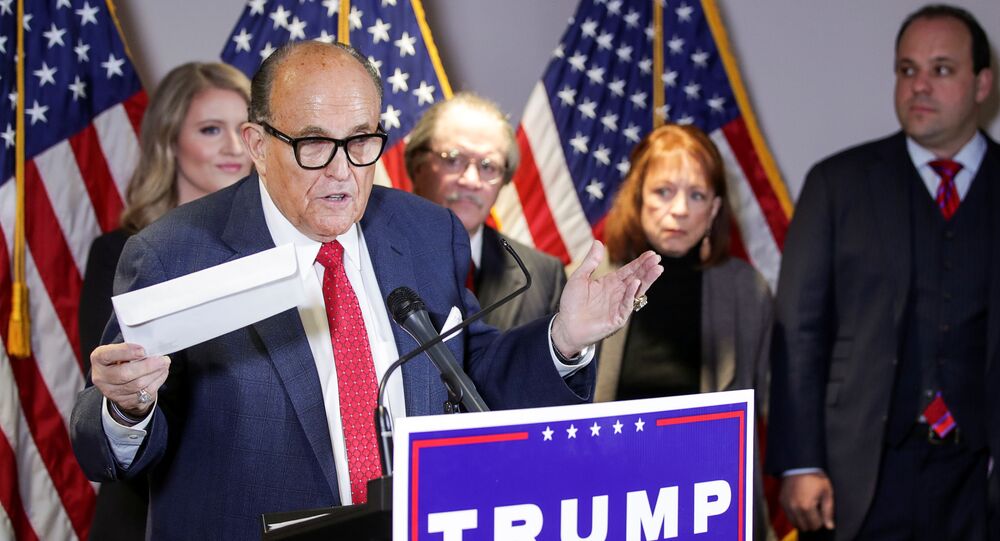 Earlier in the day, Donald Trump announced that his campaign's lawyers would outline a "very clear and viable path to victory" against Democrat challenger Joe Biden. The President has repeatedly accused opponents of widespread voter fraud. Democrat officials and most mainstream media have dismissed the allegations and urged Trump to concede.

Trump campaign lawyer Rudy Giuliani has accused leaders of Democrat Party-run cities in key battleground states of carrying out a co-ordinated, "centralised" campaign of voter fraud to rob Donald Trump of victory in the 3 November election.

Pointing to the case of Philadelphia in Pennsylvania specifically, Giuliani alleged that the number of potential voter fraud cases in that city "could fill a library".

"You could say the same thing about Detroit," the Trump campaign attorney added, pointing to sworn affidavits of alleged illegal activity from citizens and election workers.

"Each of these are cities that are controlled by Democrats, which means they can get away with anything they want to do, it means they have a certain degree of control over - certainly control the election board completely, and they control law enforcement, and unfortunately they have some friendly judges that will issue ridiculously irrational opinions just to come out in their favour," Giuliani claimed.

Getting into details of the fraud claims, Giuliani pointed to alleged irregularities in Pennsylvania, including 682,770 mail-in ballots "for which we have affidavits that there was no inspection of [these ballots] at the time that [they were] entered in the vote."

Accusing the Biden campaign of setting up the "best voter fraud team in the world," referring to the Democrat candidate's apparent verbal slip in which he boasted about having amassed "the most extensive and inclusive voter fraud organisation in the history of American politics," Giuliani  claimed that though "they were good," they did make "significant mistakes, like all crooks do, and we caught 'em."

According to Giuliani, one of the ways 'fraud' was enabled across multiple states was by kicking Republican Party inspectors out of the vote monitoring and counting process. He added that in some instances, all observers, both Republican and Democrat, were barred.

"When it's being counted, almost invariably in the United States up until the mass cheating that went on in this election, a Republican and a Democrat inspector, as well as others if there are other parties, is allowed to watch the unsealing of ballots," Giuliani continued. "Because the only time you can ever find out if it's a fraudulent ballot is when it is looked at. The minute you approve this [envelope] it's thrown away, gone for eternity. The only thing left is the vote. That could have been Mickey Mouse, that could have been a dead person, that could have been not filled in properly. That could have been the same person 30 times, (and all these things have happened by the way), there could have been nothing filled in. We'd never know."

According to the lawyer, the Trump campaign has "hundreds of witnesses" including sworn affidavits of to different rules being observed regarding the correction of ballots between major cities and rural areas of Pennsylvania, which is illegal under the US Constitution. Giuliani also boasted that the campaign has "hundreds" of persons testifying to alleged election irregularities, including the case of one election official in Michigan being 'coached' not to ask for voter identification, to allow people to vote multiple times, not to study signatures on absentee ballots, and to pre-date votes cast after 3 November.

Giuliani said his team was preparing a lawsuit in Georgia, and a "probable" one in Arizona based on evidence that's still being collected. He added that he has "very, very significant amount of fraud allegations in the state of New Mexico", as well as Virginia. He also pointed to suspected fraud in Wisconsin and Nevada. According to the Trump lawyer, based on the voter fraud cases suspected by his team, the Trump campaign already has "more than double the number of votes needed to overturn the election in terms of provable illegal ballots."

President Trump has repeatedly accused his opponents of large-scale targeted voter fraud in key swing states. Former Vice President Biden has dismissed these allegations, as have most Democrats and even some Republicans, as well as the legacy media.