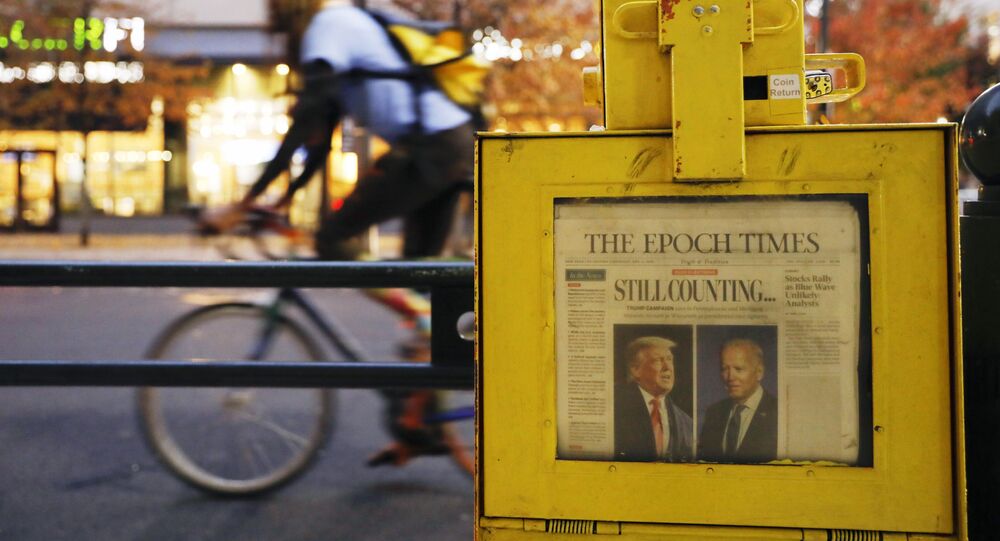 On Tuesday, Pennsylvania’s Supreme Court threw out a Trump campaign lawsuit accusing officials in Philadelphia of violating state election law by keeping poll watchers too far back from mail-in ballots as they were counted, on the pretext of health concerns associated with the coronavirus pandemic.

The Trump campaign has filed a new lawsuit in a Pennsylvania court asking it to allow the state’s legislature to pick Pennsylvania’s 20 electors for when the Electoral College formally meets in January.

“In contrast to the 2002 International Electoral Standards, the Pennsylvania Supreme Court has struck out in a unique direction among democracies and declared that meaningful observers are not part of verification and votes may be counted without any review by political campaigns and parties,” the filing argues, referring to the failure of its previous lawsuit, as well as a policy document by the Sweden-based Institute for Democracy and Electoral Assistance, whose formal members include 33 countries from Europe, Latin America, Asia and Africa, but not the United States.

Citing the Supreme Court decision on the 2000 presidential election, which was contested by then-Vice President Al Gore and Texas Governor George W. Bush,” the filing suggests that the “disparate treatment between Pennsylvania countries created a textbook example of an Equal Protection violation, prohibited by the United States Supreme Court (Bush v. Gore).”

Alleging that 1.5 million ‘suspicious’ mail-in ballots in seven counties “should not have been counted,” the Trump campaign calls on the court to allow for a challenge of the official results, and for Pennsylvania’s state legislature, known as the General Assembly, to pick the winner of the race.

“This court should enter an order, declaration, and/or injunction that the results of the 2020 presidential general election are defective and providing for the Pennyslvnaia General Assembly to choose Pennsylvania’s electors,” the campaign says.

© AP Photo / John Bazemore
Video: US Cyber-Security Expert Exposes Flaws in Pennsylvania e-Voting Systems
US District Court Judge Matthew Brann threw out the Trump campaign’s previous lawsuit on Tuesday, dismissing allegations that upwards of hundreds of thousands of ballots may have been tampered with.

US media including the AP crowned Democratic candidate Joe Biden winner of Pennsylvania and its 20 electoral votes last week, with the challenger reported to have won some 3.45 million votes against Trump’s 3.37 million.

The Trump campaign has also filed a separate suit in a Pennsylvania court this week asking a court to provide it with election records, including copies of envelopes and some mail-in ballots.

The Trump campaign’s case in Pennsylvania is one of multiple legal challenges it has mounted in the wake of the November 3 election, which President Trump has claimed featured widespread fraud in battleground states including Georgia, Nevada, Michigan and Arizona.

The Biden campaign, most US mainstream media and even some Republicans have dismissed the president’s election fraud allegations and asked him to concede to Biden.

On Thursday, Trump announced that there would be an “Important News Conference” later in the day in which his lawyers would outline a “very clear and viable path to victory.”

Important News Conference today by lawyers on a very clear and viable path to victory. Pieces are very nicely falling into place. RNC at 12:00 P.M.