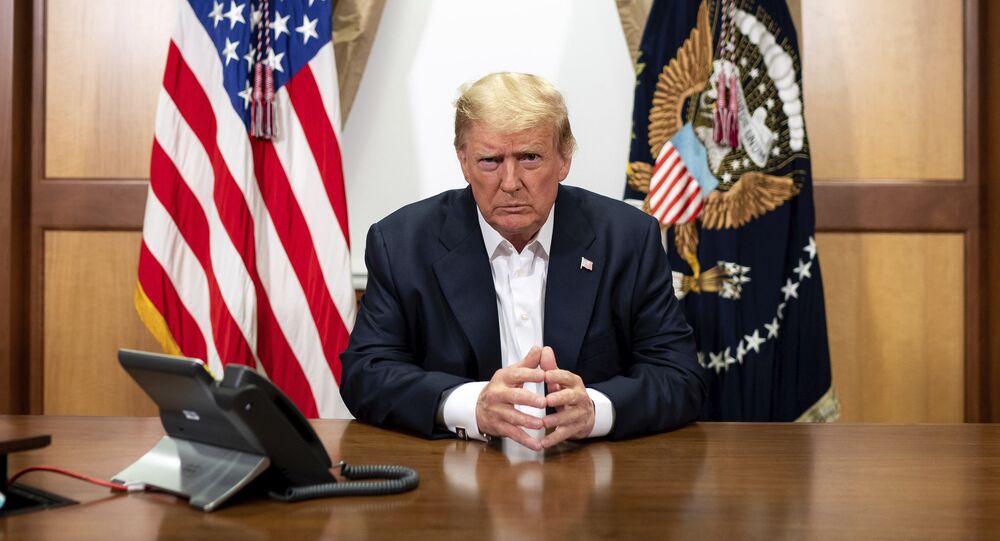 A new batch of sanctions against the Islamic Republic of Iran is not the only leverage Donald Trump can use in the coming two months, say American academics, outlining the White House's potential strategy to take "irreversible" measures against Tehran and throw up obstacles to restoring the Iran nuclear deal.

The US Treasury Department hit the Islamic Republic of Iran with new sanctions on 18 November, while US Secretary of State Mike Pompeo has released a statement entitled "The Importance of Sanctions on Iran", which insisted that undoing the Trump administration's anti-Tehran restrictions would be "a dangerous choice".

The new sanctions target Iran's Mostazafan Foundation and about 160 of its subsidiaries allegedly linked to the country's Supreme Leader Ayatollah Ali Khamenei, as well as Iran’s Intelligence Minister Mahmoud Alavi and a number of other individuals because of supposed human rights issues.

What's Behind New Sanctions Against Iran?

The US Treasury and State Department's move came on the heels of the 2020 presidential election with former Vice-President Joe Biden being called as the projected winner of the race. Nevertheless, Donald Trump has not conceded amid pending recounts and litigation over the alleged election fraud.

"Clearly, President Trump has decided to intensify his efforts against Iran by announcing these sanctions," says Nader Habibi, the Henry J Leir professor of Practice in the Economics of the Middle East at Brandeis University's Crown Center for Middle East Studies.

It appears that the incumbent President is trying to make it much more difficult to remove or cut the anti-Iran sanctions in the future, according to the professor.

​"In order to do that, he is relabeling some sanctions as sanctions for violation of human rights and violation of their anti-terror activities," Habibi says. "Both of these make it very difficult for a future president to remove the sanctions with executive order."

The Trump administration is trying to create a set of irreversible measures against the Islamic Republic, echoes Dr Rasool Nafisi, an Iran analyst and professor at Strayer University in Virginia.

"When a new administration comes in, it will have to go along with it, at least to a certain extent. And if they want to do something else, meaning change course, it may sound somewhat against the national interest. So that is the plan", Nafisi notes.

© AP Photo / Vahid Salemi
An Iranian security directs media at the Bushehr nuclear power plant, with the reactor building seen in the background, just outside the southern city of Bushehr, Iran, Saturday, Aug. 21, 2010

Is Restoring the Iran Nuclear Deal Back on the Table?

Meanwhile, reviving the 2015 Joint Comprehensive Plan of Action (JCPOA), commonly known as the Iran nuclear deal, unilaterally abandoned by the Trump administration in May 2018, is regarded by Tehran as a priority in dealing with any US administration after the 2020 presidential election.

"Biden has announced that he would try to negotiate with Iran and to encourage Iran to return to the nuclear agreement", highlights Habibi.

Joe Biden was the US vice-president at the time Barack Obama was among those to agree the JCPOA with Tehran.

The US is still a UN member. If it meets its obligations as such under UNSCR 2231, we will fulfill ours under the #JCPOA.

If the US then seeks to re-join the JCPOA, we're ready to negotiate terms for it to regain its "JCPOA Participant" status.https://t.co/cQXJo8PZak

​On 18 November, Iranian Foreign Minister Mohammad Javad Zarif indicated that Tehran would return to its full commitment in the 2015 nuclear deal if Biden lifts sanctions against the Islamic Republic after assuming the Oval Office. Earlier, Tehran pulled out of some of the JCPOA commitments in order to pressure the EU into saving the nuclear deal amid Washington's sanctions spree.

The Iranian foreign minister believes that if elected, Biden could lift all sanctions "with three executive orders".

It appears that the other signatories to the JCPOA would welcome Washington's return to the nuclear accords, says Nafisi.

"European allies, as you know, have not been happy with Trump at all… and they will try to work out all sorts of deals with the United States, including on Iran," he says. "Europeans are not really that tough on Iran except for human rights, that they are not very happy with Iran at all and that they will try to support the new administration to a certain extent and explicitly go back to some form of JCPOA. And they will try to renegotiate it, as I said, like the US".

One of the indications that this assumption is correct is the way the UN member states refused to endorse Washington's August 2020 resolution to extend the arms embargo against Iran: "[The Trump administration] got no support at all", the academic says. "It was the greatest failure of the US".

'Trump Can Do a Lot in NEXT Two Months'

Although Joe Biden "promised to move quickly to rejoin the nuclear deal with Iran", returning "to the way things were may be impossible",  given that Trump is stepping up sanctions against the Islamic Republic and selling advanced weapons to Iran's rivals, warned The New York Times on 17 November.

Indeed, whatever the result of pending election lawsuits will be, the Trump administration is going to be at the helm of the US foreign policy for at least two months, the academics admit.

"I think in the Middle East, [Donald Trump] still has some options for surprise moves that might provoke confrontation with Iran," suggests Habibi. "For example, a military strike against Iranian nuclear facilities or a cyber attack or any type of sabotage which might provoke a response and cause instability in the region."

In addition to this, President Trump has accelerated the sales of advanced weapons such as F-35 fighter jets to the United Arab Emirates (UAE) in order to put further pressure on Iran, Habibi points out.

"This can disrupt the balance of power between Iran and its Gulf neighbors, Persian Gulf neighbors, and perhaps might provoke some kind of sudden activity by the UAE, such as a strike that might again provoke military exchange and that will disrupt the flow of oil and commercial activity in the Persian Gulf, which is very important to the European allies," the professor says.

It is also plausible that, in the next two months, Trump will capitalise on his multi-million constituency to push ahead with his foreign policy initiatives, including anti-Iran sentiment, Nafisi believes, citing the fact that given Trump's popularity the Republicans are likely to utilise his narrative. In this light, Mike Pompeo's thesis "The Importance of Sanctions on Iran" is a harbinger of this strategy.