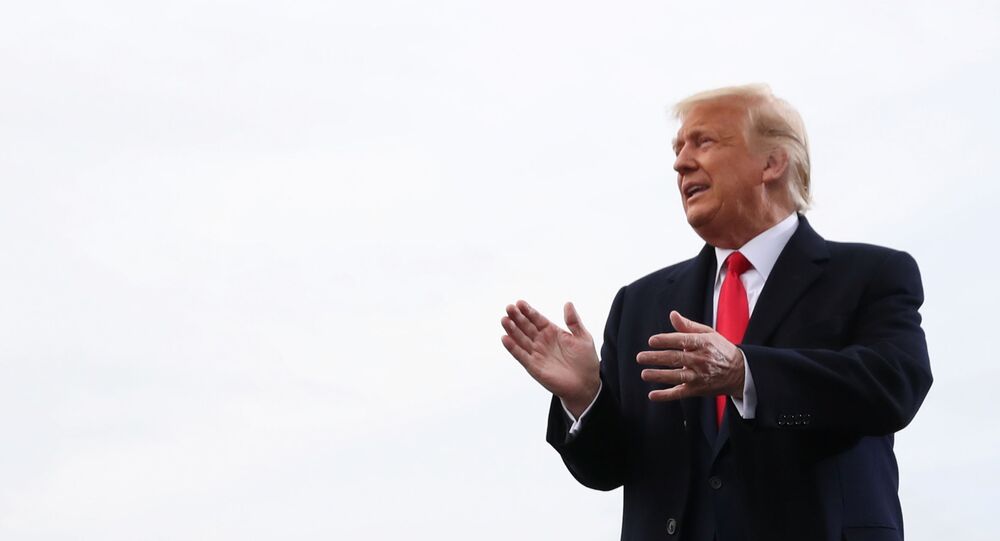 Donald Trump's legal team is continuing its legal battles in the courts in at least six battleground states over reported election irregularities and alleged fraud. International observers have discussed the president lawyers’ strategy and the chances of tipping the balance in Trump's favour.

The team, which is led by ex-New York City Mayor Rudy Giuliani and Trump's private lawyer Jay Sekulow, has recently been expanded to include former DOJ official Victoria Toensing, former federal prosecutor Sidney Powell, ex-US Attorney Joseph diGenova, and Trump campaign lawyer Jenna Ellis, according to Just The News. The Hill earlier reported that "prominent Atlanta attorney Lin Wood" had also signed on to the Trump team. As the litigation goes on, the incumbent president refuses to concede to his Democratic rival Joe Biden, who has been called the winner by the US mainstream media.

'Trump Legal Team Has Yet to Score Significant Victories'

"I know Rudy Giuliani very well", says Pastor Mark Burns, an evangelical preacher and former Republican candidate for South Carolina's 4th congressional district seat. "[He] believes without a shadow of a doubt, that there is enough evidence that they are presenting to the courts to overturn the election. They believe they have enough evidence of voter fraud, in key states across the country to overturn the election by the Supreme Court".

Burns admits that it's hard to assess how successful the Trump lawyers' effort will be, as they are "still in the process".

"I do know, unfortunately, out of these 21 plus lawsuits that have been filed, five have been thrown out", he notes, adding that the Trump legal team is facing an "uphill battle".

Trump’s team has yet to score any significant victories since the election, says Dr Rubrick Biegon, a lecturer in international relations at the University of Kent, adding that "various allegations levelled by Trump and his legal team have been routinely dismissed in the courts".

"When you have tens of millions of people voting in an election, you will always have some minor irregularities and inconsistencies, especially in a country where voting procedures differ across states and jurisdictions", the academic suggests.

One of the pending lawsuits, filed in Pennsylvania, is seeking to throw out 682,479 mail-in and absentee ballots considered illegal by Trump's lawyers as they were "counted in secret", and to prevent state officials from certifying the vote results over supposed election irregularities.

WATCH: In #Pennsylvania, there's a major equal protection challenge in court. Ballots were treated differently in #Democrat controlled counties than in counties controlled by #Republicans.

​The hearing is due to be held on Tuesday. Joe Biden’s margin in Pennsylvania amounts to nearly 70,000 votes. Trump's lawyers believe that about 250,000 votes in Michigan were also tainted by a process which was open to fraud and abuse.

Meanwhile, The New York Times reported last Friday that lawyers from the Porter Wright firm, working on behalf of the Trump campaign in Pennsylvania, had quit due to "internal tensions" over the case. Philadelphia election lawyer Linda Kerns and two Texas lawyers also withdrew from Trump's legal team on 16 November, according to the Associated Press.

"Based on these law firms that have been asked to be removed from the case or not handling the case anymore, they feel that they haven't seen enough evidence of tampering or voter fraud", Mark Burns suggests.

However, Team Trump argues that attorneys representing the president have been subjected to pressure amid the ongoing election controversy.

One of our lawyers in PA has received abusive e-mails, calls & physical & economic threats.

One voicemail was from a lawyer at the firm representing the Commonwealth of Pennsylvania, running far afoul of standards of professional conduct.

It has been turned over to the court. pic.twitter.com/cwSILjbjt0

​Thus, on 16 November, Tim Murtagh, spokesman for President Donald Trump’s campaign and legal team, stated that a lawyer working on their behalf in Pennsylvania had allegedly received “abusive emails” and calls, as well as "physical [and] economic threats" from an attorney with the firm Kirkland & Ellis, representing Pennsylvania Secretary of State Kathy Boockvar. Last week, Boockvar's legal team asked a judge to dismiss the Trump campaign's lawsuit.

​Does Trump's Legal Team Have a Strategy?

"Trump’s lawsuits are not part of a coherent legal strategy to contest or overturn the election result", argues Rubrick Biegon, commenting on Trump's legal teams around the country going back and forth in post-election litigations.

Biegon believes that the president's legal efforts are actually "part of a political strategy aimed on protecting" his "brand".

"This political strategy is also geared toward the Senate runoff elections in Georgia on 5 January", the academic suggests. "Senate Republicans have likely determined that an angry, aggrieved base of Trump supporters is more likely to turn out for the Republican candidates. This may backfire if Republicans genuinely believe there is widespread election fraud".

Responding to mounting criticism in the US mainstream press over Trump's legal effort, the president's lawyer Jenna Ellis insisted on 16 November that the team has a "coordinated cohesive strategy that's dealing with two things": first, Republicans were repeatedly denied access to the ballot counting; second, growing concerns over the Dominion Voting Systems equipment and software which were used in over 29 states.

On 15 November, former federal prosecutor Sidney Powell suggested in an interview with Fox News that apart from evidence involving potential voting irregularities, the Trump legal team has proof that Dominion Voting Systems' software had switched “millions of votes” from Trump to Biden. Powell refused to provide specifics as to what evidence she has to confirm the claim. Last week, the former federal prosecutor dropped a hint that she was ready to "release the Kraken", prompting a Twitter meltdown.

In a statement to the press, Dominion Voting Systems has categorically denied any "false assertions about vote switching and software issues" with their voting equipment, including the much-discussed "glitch" in Michigan's Antrim County which, according to the company, was actually "a user-error incident".

According to Dershowitz, the president is not actually seeking to get to 270 electoral votes through nationwide litigation. Instead, his legal team is trying to "deny Joe Biden 270 votes, by challenging in Pennsylvania, Georgia, in Nevada, in Michigan, in Arizona". Biden's failure to reach the election benchmark would force House state delegations to vote, and here the GOP has an advantage over the Democrats, maintaining a 26-23-1 state delegation majority, the professor elaborated.

Commenting on the scenario outlined by Dershowitz, The Epoch Times noted that "Trump’s campaign or legal team has not publicly stated whether that strategy is in play". The media outlet has put forward yet another version of how the events may unfold. Under this scenario, the governors and the legislatures in closely contested states may submit different election results. In this case, the states would have two sets of "duelling electors" and it would be up to the US Congress which to accept.

Meanwhile, the recount in Georgia – which was kicked off because of the razor-thin margin between Trump and Biden – has borne its first fruit: 2,600 uncounted ballots, mostly for the incumbent president, have been uncovered in Floyd County. According to the state authorities, the ballots remain uncounted because the county election officials somehow failed to upload them on 3 November. Georgia Secretary of State's Office election official Gabriel Sterling told reporters on Monday that the latest discovery is unlikely to change Biden's win whatsoever.

How does one “forget” to count 2,600 ballots?? If this is happening in conservative Northwest Georgia, can you imagine what is going on in the liberal cities nationwide? This is EXACTLY why @realdonaldtrump should NOT concede! Enough is enough- we must #AuditTheVote!! https://t.co/fL6uVPXlRK

​In Nevada, Clark County tossed 153,000 votes on 16 November after a canvas revealed 139 discrepancies in a district where the margin between the presidential contenders was extra-thin. Clark County Registrar Joe Gloria stated that the county would not certify the contested race. “We have found discrepancies that we can’t explain that would cast a doubt on whether or not that margin of victory is solid”, he said.

The Clark County Commission just threw out an election that represents almost 1/6 of the total votes cast in Clark County because there were too many “discrepancies” to be sure that that the results in that election can be certain. 153K votes in this election. https://t.co/kqO1cBwnYH

​Team Trump is not only challenging the election results in major battleground states: on Monday, the Great Lakes Justice Center non-profit filed an appeal with the state of Michigan to reverse a Wayne County judge’s decision to deny a ballot audit. The lawsuit also called for blocking the certification of the vote results in the county. A day earlier, the American Freedom Law Center filed a federal civil rights lawsuit in the US District Court for the Western District of Michigan over the conduct of the 2020 general election on behalf of two Michigan voters.

For his part, Republican Congressman Andy Biggs (AZ) recently requested a 100% audit of Maricopa County in Arizona. In a letter to the Maricopa County Board of Supervisors, the congressman argued that "hundreds of voters in Maricopa County have signed affidavits alleging their ballots cast in the November 3 election may have been discounted". According to Biggs, "a manual audit of ballot images will provide full transparency of Maricopa County’s election results".